What does it take to “make it” on Maine’s coast and islands?

Locals and visitors alike recognize the resourceful, mindful blend of independence and interdependence that one must embrace to thrive here. We appreciate that the rewards of a life here are not without challenge.

The first edition of Waypoints: Community Indicators for Maine’s Coast and Islands, published in 2017, highlighted the economic, community, and environmental indicators that reflective of the priorities of the community partners and trustees we rely on to steer our work as an organization. This second edition, Waypoints: Livelihoods on Maine’s Coast and Islands, is dedicated to quantifying the way coastal Mainers make a living and presents new data that tells the story of how income levels, prevalence of self-employment, impacts of fisheries, and seasonality of the labor force define the economic and cultural landscape of our region.

Read on to learn about:

We hope these data and stories will inform local leaders as they initiate community-driven change, while helping state and federal leaders understand the unique economic challenges facing Maine island and coastal communities.

There are 120 communities included in these data—105 coastal and 15 unbridged, year-round islands—with 454,000 people living in these communities.

A Tale of Two Coasts

With more than 3,500 miles of coastline there is broad variability in the size of communities. Two-thirds of the coastal population lives around the Portland region and south; the other third is spread sparsely along the rest of the coast, down long peninsulas and on islands. The varying distances to service-center hubs prove costly for many residents. The smaller communities often have difficulty supporting quality essential services like childcare, eldercare, healthcare, and local economic development.

Why is this important?

The size of communities impacts how well residents are supported in their ability to make a living. Smaller communities have human and financial challenges that can limit investments in local infrastructure or economic development projects. It can be difficult for small communities to change these dynamics themselves and challenging for private sector companies that provide economic development services (e.g., broadband internet) to construct business models that work in small, remote locations. 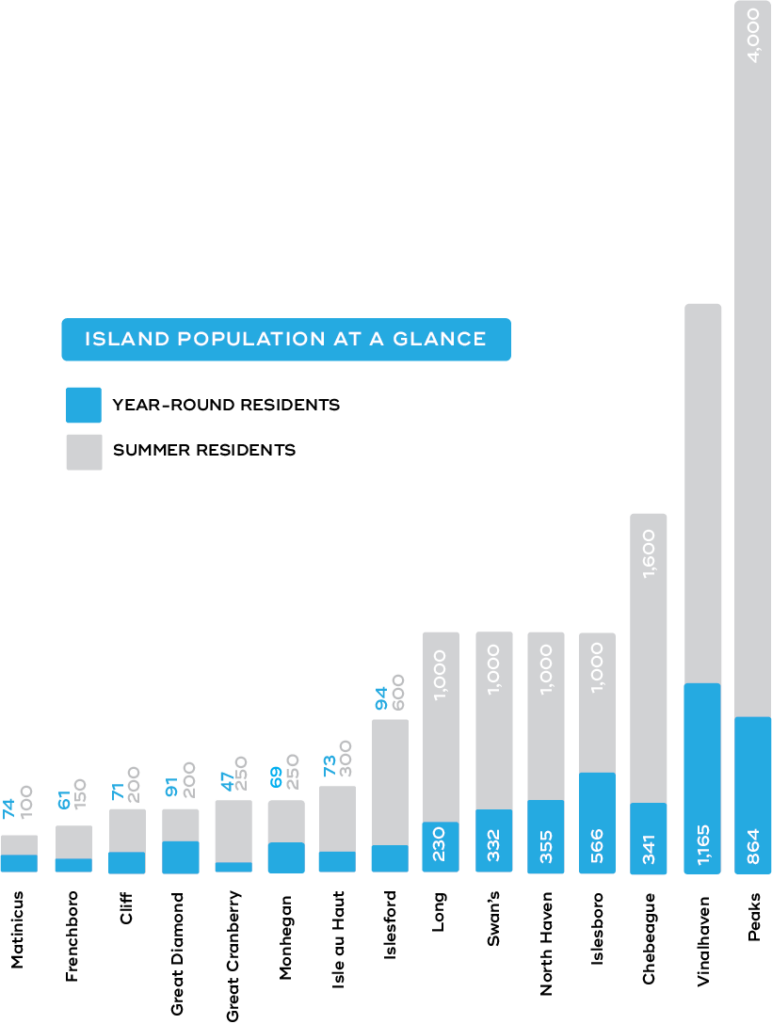 Almost a quarter of coastal Mainers work in education or heathcare, about the same as the national average. Beyond this cluster, coastal Mainers are primarily drawn to retail, manufacturing, arts, recreation, tourism or professional service jobs.

Many coastal towns are economically buoyed by the tightly coupled segments of finance, retail, arts, and tourism. Although the boost is typically seasonal, these segments are anchors for service-area hubs. 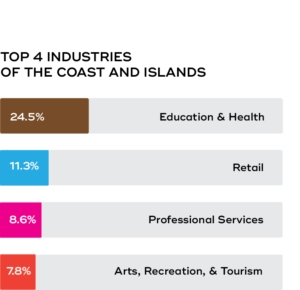 A high percentage of residents living on fixed incomes. This, coupled with higher costs of living, makes it challenging to turn income into livelihoods. Almost 40% of island and coastal residents rely on Social Security income, compared to 30% nationally. In addition, islands and other rural communities throughout the United States pay some of the highest costs for electricity and heating fuel. For Maine’s unbridged islands, this accounts for 16-18% of their income, compared to 8.8% in Maine and 3% nationally.

The coast and islands generally have a high level of workforce participation, but it is heavily part-time and seasonal.

Why is this important?

Self-employed, seasonal workers are the key drivers of Maine’s coastal economic activity. Individuals and families often lack the financial stability offered by full-time employment benefits and are more likely challenged with healthcare and insurance needs. The income variability in fishing and other natural resource-dependent jobs, and the high cost of living on the islands, can greatly impact a family’s ability to make a living. 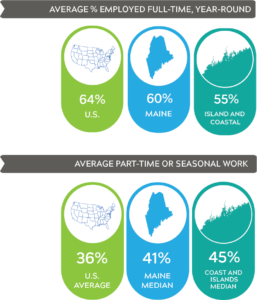 The smallest communities on the coast and islands have extraordinarily high levels of self-employment compared to the state and nation.

“There is a strange paradox about living here. Despite limitations, I get the sense anything is possible.”
— Kaitlyn Duggan, Little Cranberry Island 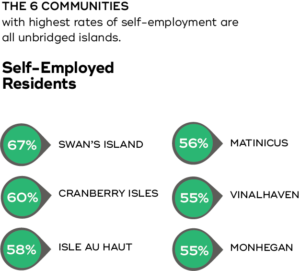 The lobster supply chain contributes $1 billion to the Maine economy each year producing 4,000+ associated jobs on land, and 6,000 jobs on the water. In 2017, the total value of lobster landings decreased to $433 million, representing an 18.6% drop in value from 2016.

Although landings have increased for the last decade, year to year variability of the fishery has broad economic impacts across the state.

Lobster licenses are held in every island & coastal community.

In almost half of coastal communities, at least 5% of residents hold commercial lobster licences.

Young people are still entering the lobster fishery despite volatility in landings and value. 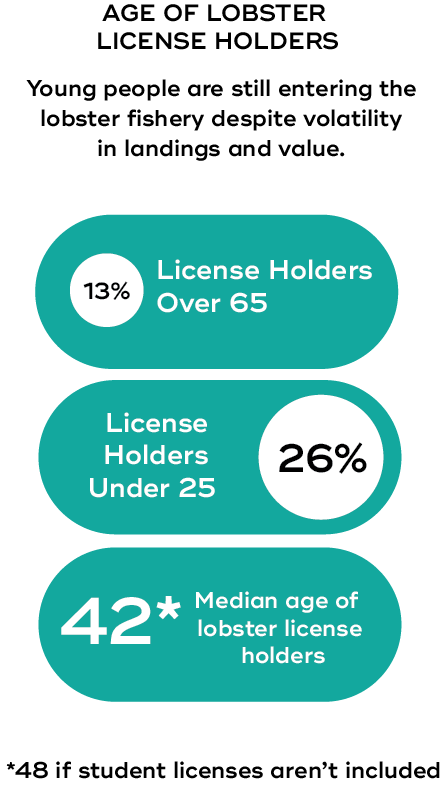 Populations on the coast and islands skew slightly older than the state overall and have higher educational levels, but there is much variability along the coast. The largest coastal communities, which are almost all in southern Maine, are younger and have higher educational levels than the rest of the island and coastal communities. Gender in the Workforce

Coastal and island communities often define their identities based on the industry in which the highest percentage of men work: e.g., fishing, farming, and forestry. In these same communities, the highest percentage of women work in healthcare, education, and social assistance, consistent with trends across the country. Self-employment is high for both men and women. 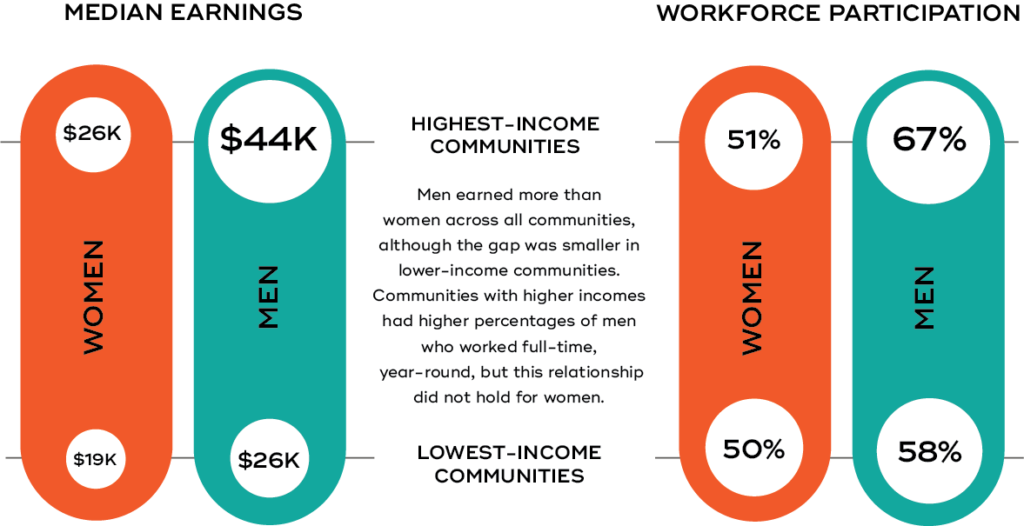 For more detailed information, view or download the complete publication as a PDF:
2018 Waypoints: Livelihoods publication

For a comprehensive breakdown of town-specific data included in Waypoints 2018, see the data spreadsheet here:

If you have additional questions or feedback regarding Waypoints, we’d love to hear from you!