While mainland residents can adopt an 'out of sight, out of mind' approach to their trash, if you live on an island, you know that solid waste removal is neither simple nor invisible. Nor cheap. In the age of plastics, older island methods like burning, backyard dumping, and ocean sinking aren't legal or desirable. Islands present particular challenges when managing solid waste. Finite space, thin topsoil, and the high potential for groundwater contamination preclude the traditional landfill. Federal clean air acts and the risk of fire prevent large-scale burning. Remote locations and erratic ferry schedules mean that transport off the island can be infrequent and expensive. Whether contracting with a nearby city, using private barge, or relying upon volunteers, each island must consider its own particular set of circumstances when developing a sustainable waste management program.

Matinicus Island had a junk car problem as well as a trash problem: old cars were rusting where owners left them in the woods and on the roadsides. Trash washed up on beaches, and the two biggest recent island structure fires were caused by out-of-control trash fires. In 2002, Eva Murray decided Matinicus needed a better waste management system. She started small and advanced slowly, but over the last 16 years, she’s built a volunteer-run recycling program that now hauls roughly 30,000 lbs of recyclables, returnables, and trash each year and has expanded to include a yearly household hazardous waste collection day. Using private land and volunteer labor, Matinicus likely  has the cheapest solid waste program in the state, says Eva. It costs the town on average about $15,000 a year.

Twice a week in summer and once a week in winter, Matinicus residents can bring their clean recyclables to five, 8ft x 16ft wooden sheds that stand on church-owned property. A dedicated group of 6-8 volunteers help residents sort their waste, much of which is packed into banana boxes (a third use for the grocery store packaging that rapidly accumulates on the island). The sheds store the island’s recyclables until “Dump Day,” which occurs roughly twice a month in summer and once per month in winter. Because the Matinicus ferry only runs about 36 times a year and can accommodate just 2 or 3 trucks, Eva reserves a spot for a rented U-Haul several months in advance. On that day, she picks up the truck in Rockland (and loads any oversized, island-bound freight, carried free for program volunteers), and when the ferry docks at Matinicus, she and her volunteers have 1 hour to unload and load the truck for the return ferry to Rockland, where Eva then makes the rounds to the transfer and recycling station, redemption center, Goodwill, and paint store. “Dump Day” takes her about 36 hours.

Q & A WITH EVA MURRAY 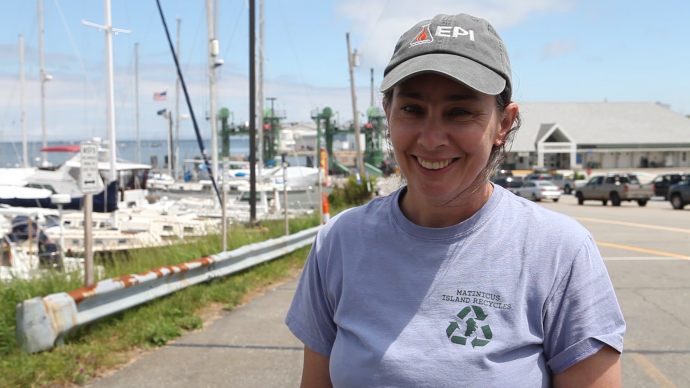 How do you manage non-recyclable waste?

We do have a town agreement with Rockland to bring some non-recyclable trash to the transfer station, and we pay all disposal fees. Between household composting, Goodwill, and Rockland’s expanded recycling options, there’s actually very little trash. Our rule at the sheds is “No putrescibles.” That means we’ll take anything that isn’t vermin-friendly or rot-prone, smelly (ex: diapers), biohazard (ex: bathroom trash), or toxic (ex: lead paint).

Once a year, we hire Environmental Projects, Inc. to come out to the island to collect our household hazardous waste. Rockland Transfer Station can’t take it. For one day, EPI sets up tarps in front of the fire station powerhouse and people bring their lead paint, marine paint, garden chemicals, used motor oil, etc. They’ll take anything that isn’t explosive or radioactive. It costs up to $6,000 to do this once a year, but it’s worth it to not have lead paint seeping into our well water.

You mentioned that when you first started, there was a backlog of metal waste sitting on the island. How did you reduce that to a more manageable amount that could be sustained by the monthly recycling program?

Everything accumulates on an island. People had three, four, five water heaters sitting in their basements. In the beginning, we held scrap metal collection days. Once or twice a year, we hired a scrap metal dealer to come out, and hired an islander who had a Bobcat loader, to load scrap metal into a truck and take it back on the ferry. That service was paid for by the users, and we did that until we got rid of the backlog. Now we can take the small amount of scrap metal generated each month and pay the disposal fee at the transfer station. In 1999, we used tax money to hire Prock Marine to bring their barge and crane out here to haul about 75 junk cars off the island.

Why go through the hassle of renting a truck for each run? Wouldn’t it be more effective to buy one?

There’s no mechanic on the island. There’s no garage to keep it in. Paying to keep a truck in working, legal order would be much more expensive than renting one when we need it.

How do you manage seasonal population swings?

It’s easier on Matinicus because there are no hotels or restaurants. We don’t have to deal with all the food waste that some islands generate. We do have seasonal renters, though, and it’s up to the rental cottage owners to encourage people to pack out their trash. Renters are welcome to bring their recycling to us, we don’t turn anyone away, but we encourage them to take their non-recyclable trash away when they leave. These days, a lot of Matinicus residents are part-time locals. They have a house in Rockland or Thomaston for the winter, which means they have a dump sticker. So, they have the option of taking their trash with them when they leave the island, too.

How do you rally a group of committed volunteers?

Committees don’t make work happen; individuals make work happen. This program depends upon the 6-8 volunteers who really care enough to do the grunt work and show up every Saturday morning and to load the truck on ferry day. I do what I can to say thanks, but none of this would happen without them. Public services don’t just ‘happen.’ They don’t happen by executive fiat or by magic. One of your neighbors is doing that work.

The program has increased each summer in its number of users, community support, and the amount and diversity of waste it can take. Eva estimates that on average about 100 people use the program, a majority of island residents. Users range from “the diehards to the people who only bring me their beer bottles,” says Eva, but every bit counts. She estimates the program now hauls 25,000 pounds of solid waste off the island each year.