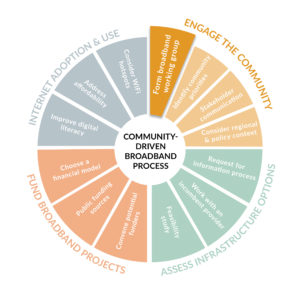 Broadband working groups can help distribute the hard work it takes to bring broadband to a community.

Like any community project, successfully improving internet connectivity takes the efforts of more than just one person. Forming a broadband working group, task force, or committee is a great way to pursue broadband improvements. Bringing together community members with diverse backgrounds can help with developing the community vision for its future, educating the broader community about broadband, and communicating the group’s efforts moving forward. In this way, working groups can help ensure that there’s community-wide support for resulting broadband projects.

Broadband solutions may require municipal involvement. This led the five dedicated residents who initiated a grassroots efforts on Long Island in Casco Bay to seek authorization from their local officials. While these residents intend to continue pursuit of broadband, they received municipal authorization as the Broadband Exploratory Committee to investigate broadband options and make a recommendation report to the select board. With more formality, the Town of Cranberry Isles select board authorized the Broadband Communications Working Group, which meets on set agendas to progress their broadband efforts.

Not all working groups are initiated or driven by local governments though. On Swan’s Island, residents initiated their broadband committee, by pulling together a diverse group that includes business owners, librarians, school officials, technical experts, health professionals, and also municipal officials. Cliff Island is part of the City of Portland, so residents there utilized an existing nonprofit, Sustainable Cliff Island. It was established to address the problems that threaten the sustainability of year-round residency on the island. Picking up the topic of broadband made sense in hopes of increasing employment options on the island, enabling and enriching educational opportunities, accessing government services, and facilitating the development of a telehealth facility.

Cliff and Long Islands, with Chebeague Island, joined forces to seek cost-efficiencies in a potential broadband solution, by appointing representatives from their individual working groups to a regional task force they call Down Bay Broadband. In addition to benefiting from each other’s skills, resources, and credibility, they are also able to leverage one another’s existing internet infrastructure for expansion of broadband to all three islands. Their aggregated voice (and potential customers!) can generate more attention from potential internet services providers.