Maine’s seafood economy, steeped in heritage, provides the lifeblood for our rural coastal communities and lives and dies at the complex intersection of environment, policy, community, and economy. To prosper in an increasingly warm and unpredictable world, the sector must innovate. This innovation can come in the form of economic diversification of the marine sector. However, generating successful innovators is most effective when those innovators are properly trained and prepared for the challenges that arise with marine entrepreneurship.

For a new grower, developing a good relationship with the surrounding community can be both important and difficult. There are many real and perceived conflicts that can arise with individuals including riparian/waterfront landowners, fishermen and recreational users, environmental advocates, and even other aquaculturists. If unaddressed, in the short-term, these conflicts can slow the process of acquiring a lease or even lead to a declined application. In the longer-term, poor community relations can worsen the overall reputation of aquaculture in Maine and hurt the business of other growers throughout the state.

Despite this, there are actions that both new and experienced growers can take to minimize conflict and ease concerns, and many examples of aquaculturists who have developed great relationships with their surrounding communities. In addition to shortening the leasing process, these relationships can often result in partnerships and assistance from the community that is invaluable for both parties.

While lobster fishing has long been the primary marine occupation on Chebeague Island, in 2013, Chebeague Island Oyster Company (CIO) became the first island business to use the surrounding waters for aquaculture. Over the past four years, CIO has thoughtfully navigated tensions in its growth and is now widely accepted and appreciated throughout the island. 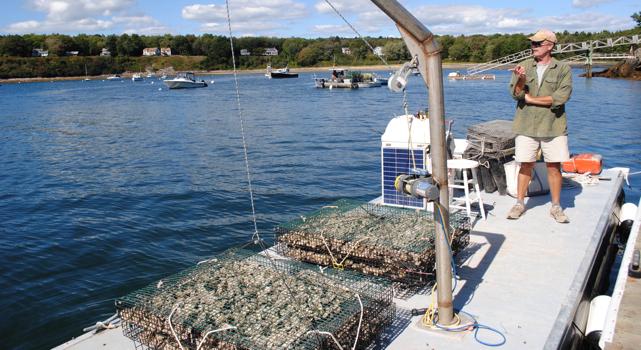 When getting started, founders Bob Earnest and David Whiston took a variety of steps to minimize conflict with their surrounding community. As island residents, they got the word out early and often to those individuals they thought would be most impacted by their plans, focusing primarily on the local fishermen. Rather than being received with outrage, they were met by interest and gained two partners in the process: lobsterman Hank Whetham and his wife Caitlin Gerber, a marine biologist. On their farm, they started small; first applying for two limited purpose aquaculture licenses with 50,000 oyster spat and working their way up to a 2-acre experimental lease stocked with 500,000 spat in 2016. In addition to this thoughtful approach, they have also worked to provide education to the local community, as well as fishermen and others interested in starting their own oyster farms, about the basics of aquaculture. 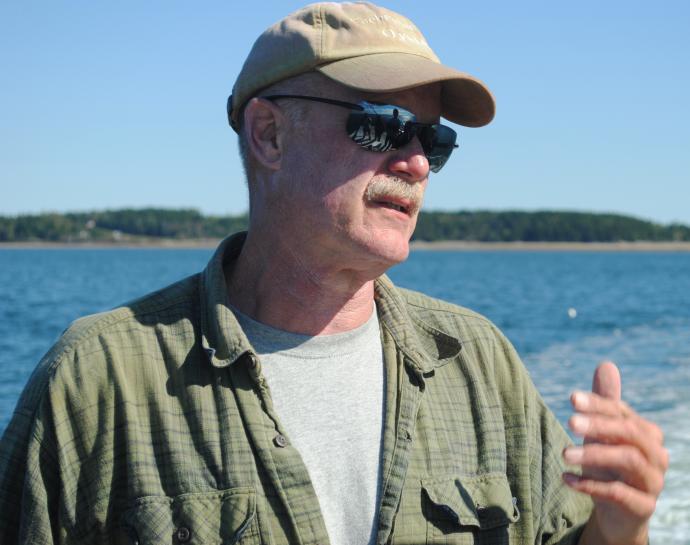 Could you give us a background of attitudes towards aquaculture on Chebeague Island?

There were lobstermen who were opposed to it being done, and their primary issue was the concept of leasing of the bottom. From their standpoint, nobody owns that bay, everybody gets to fish that bay, and there are unwritten rules about how that works – for example, where the boundary between Long Island and Chebeague exists. For the state to come in and say, “we are now going to take part of that ocean away from everybody and give it to a few,” was a major point of contention for several lobstermen. But, it’s happening all over the state, and a few of the lobstermen have begun to say, “if it’s going to happen anyway, how can we make it most beneficial to our community?”

Given that atmosphere, how did Chebeague Island Oysters approach siting and getting word out about starting an aquaculture business?

We’ve had nothing but support from the community, and in a lot of ways, this has been enhanced by the approach we took of trying to walk softly and not step on toes. We watched another aquaculture operation in this area be less conscious of the community, and saw them reap the rewards of offending some people. It led us to be really careful. The mistakes made by the original operation still affect community perceptions of aquaculture on Chebeague, but now it’s basically separated into, “that’s what people from away do, and this is what local guys are doing.”

What advice do you have for new aquaculturists, particularly in engaging with their community?

I talked to one woman who was interested in getting into aquaculture, and she was telling me about the farm she wanted to start in Penobscot Bay. I asked her how many oysters she intended to go for, and she said a million a year. I asked her the size of the lease she was going for, and she said 30 acres. To put it midly, it’s in a challenging place to come up with 30 acres, so I recommended that, at least to start, she should try to cut down on the number of acres that she applied for. To me, that is one way to avoid stepping on people’s toes. So, to new aquaculturists, I would say, see how you can minimize your impact on the community.

How do you predict that residents of Chebeague’s views will continue to change as Chebeague Island Oyster Company grows and other aquaculture businesses start up around the island?

So far our farm has gotten really positive reviews, and I think that support of aquaculture will continue to grow as we sell more oysters on the island. I think it will grow to a point and that positive reactions will grow as we and others provide some jobs on the island. That’s the next step for us and something that will take our business up a notch in the community. Everybody knows we need more jobs out here to maintain a sustainable year-round community. If we can provide a couple of part-time jobs and a couple of other people can provide some part-time jobs, and if some lobstermen are adding additional dollars into their cash-flow, then that’s the next step.