The Maine Technology Institute and FocusMaine have awarded the Rockland-based Island Institute a $300,000 contract for spearheading an industry-wide roadmap to grow the state’s marine economy.

Under the three-year contract, announced Tuesday in a news release, the nonprofit advocacy and policy organization will serve as program director for SEAMaine, Maine’s Marine Economy Roadmap/Workforce Development Project. The initiative is funded with $2 million previously awarded to MTI and FocusMaine by the U.S. Economic Development Administration.

SEAMaine will identify industry needs and opportunities, provide solutions to workforce skill gaps, and recommend investments that create a more resilient marine economy for Maine, according to the release.

With a history rooted in Maine’s fisheries and working waterfronts, the Island Institute has over 50 years of cumulative experience in project management and network-building and close to 20 years of experience in economic development.

The organization’s SEAMaine team will be led by Sam Belknap, a third-generation lobsterman trained as both an anthropologist and a climate scientist, with support from marine scientist Susie Arnold, small business expert Craig Olson, and Lisa Millette, project lead for the nonprofit’s aquaculture and marine economy work.

“We look forward to working with the Island Institute as they assume this leadership role in managing the myriad processes and partners involved,” said Brian Whitney, president of MTI. “Together, industry leaders will create an economic roadmap and workforce development plan for Maine’s marine economy.”

FocusMaine President Kim Hamilton said, “Looking to the future, we know Maine’s marine economy will continue to evolve. We need to plan for challenges ahead and take advantage of emerging opportunities to build resiliency.”

One of the world’s richest marine ecosystems, Maine’s 5,000 miles of coastline and islands have long been a mainstay of the state’s economy, particularly in rural areas. In 2016, the marine living resource sector in Maine employed 15,583 workers, according to the Island Institute. Most of the jobs were in fishing and related shoreside industries, followed by occupations within the supply chain such as processing and transportation. 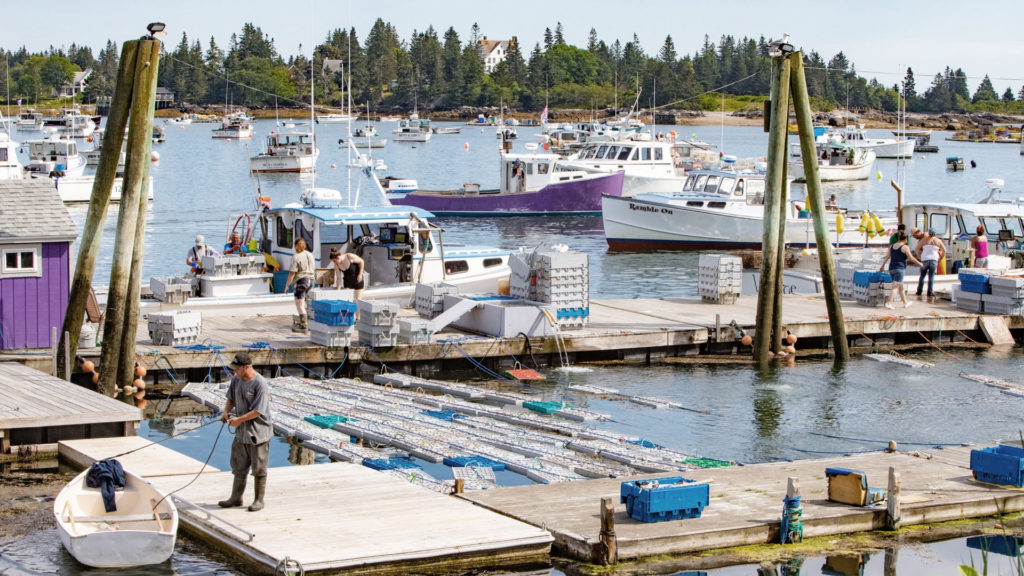 The working waterfront on Vinalhaven.