With an onslaught of hard news, I’m finding it important to pay attention to glimmers of hope. Yesterday, June 8th, was World Oceans Day and the official start of a full week of events and presentations recognizing the importance of our oceans and the major role they play in our everyday lives. As we find our way through the challenges ahead, I invite you to take a minute to appreciate Maine’s marine ecosystems and support our local seafood businesses. With this year’s theme being “Innovation for a Sustainable Ocean,” I’d also like to share an example of how one Maine marine business is leading the way in addressing the challenges posed by climate change.

Back in October 2019, at the kickoff meeting of the Maine Climate Council, Bill Mook, founder and owner of Mook Sea Farm on the Damariscotta River, said “problems are the raw material for innovation.” At the time, it was said in the context of his shellfish hatchery and oyster farm adapting to the challenges posed by climate change. A global pandemic was not on his list of potential problems.

Since the pandemic, the Climate Council is moving ahead with vigor, proposing strategies to meet Governor Mills’ ambitious mitigation and adaptation goals. Appointed members from private businesses, like the seafood industry, have stayed engaged as they are able, but have largely had to double down on changing business plans and keeping their businesses afloat amidst unprecedented changes to markets. These are key voices that are critical to finding solutions that work for industry.

I am a member of the Climate Council’s Science and Technical Committee (STS) and the Coastal and Marine Working Group, joining three other colleagues that represent the Island Institute on four out of the Council’s seven subgroups. One task the STS was assigned was to lay out the state of the science of ocean climate change on ecosystems and businesses in Maine. As an author on the STS’s chapter on ocean acidification, I highlighted the innovation demonstrated by Mook Sea Farm to illustrate the point that climate adaptation and mitigation can be good for business.

For 35 years, Mook Sea Farm has been supplying oyster seed to other East Coast growers and market sized oysters to the U.S. half shell market. Bill Mook estimates his business suffered thousands of dollars in losses annually due to ocean acidification for a period of several years starting in 2009. The oyster hatchery is the engine of the business. Along with the increasing frequency and intensity of rain storms, in 2009, Bill began noting a drop in pH—meaning the water became more acidic—during runoff events, along with longer larval phases (sometimes an additional week or more), and in some cases larval deformities and complete losses of cohorts. Just two such extended larval phases adds up to the loss of one entire spawn, resulting in over $100,000 in lost seed sales. After conferring with oyster growers in the Pacific Northwest who had experienced similar problems, he started taking precautionary steps, including storing water ahead of heavy rains and raising the pH of the water used for larval culture. Mook Sea Farm was back in business, with better larval production than ever before. Now, after partnering with the University of New Hampshire, Mook Sea Farm operates their own acidification monitoring equipment which allows them to track longer-term changes in seawater chemistry and assess its potential impact on the farm.

There are a suite of other ocean climate stressors impacting shellfish growers. Heavy precipitation events trigger closures to shellfish harvest. More frequent storms, combined with higher storm tides pull up moorings and entangle gear. Warmer water temperatures require immediate cooling of harvested oysters to prevent harmful bacteria from multiplying. To make the business more resilient to climate stressors, Mook Sea Farm constructed a new, land-based facility, completed in 2019, that can hold 500,000 oysters. It enables them to move oysters into a controlled environment prior to rainfall closure and shut off flow from the river. Being able to harvest during closures prevents tens of thousands of dollars in lost sales, enabling the business to maintain consistent distribution despite environmental stressors. Mook Sea Farm was the only oyster business in Maine in 2019 that was able to harvest oysters during the week before Christmas due to flood closures.

Mitigation is also part of Mook’s adaptation strategy. In 2018, he installed 282 solar panels (~90 kilowatt system) atop of the new facility. One of the company’s biggest costs is electricity, particularly for the walk-in cooler and cooling the water in the holding tanks. With solar electricity, he is able to lower costs, improve the bottom line, and protect the business from any future shocks in energy prices.

During a time when seafood markets have plummeted and businesses are searching for innovative ways to stay afloat, cost-saving innovations may be critical. For Mook Sea Farm, the changes have been a win-win: decreased electricity costs and a product that is buffered from numerous climate stressors. Can these strategies help insulate a business from unpredicted stressors? Bill Mook thinks so.

“The solar panels have continued to help us reduce our costs,” he says. “These changes that all of us in the seafood industry are making are not necessarily just a response to an emergency, but for longer term profitability and resiliency. But some things you do provide resiliency to unexpected occurrences.”

One thing he can count on—the sun still shines during a pandemic.

The Maine Climate Council is directed to build resiliency to climate change into every ecosystem and sector of Maine’s economy. The Island Institute strives to ensure that recommendations emerge that prioritize the needs of rural and vulnerable natural resource dependent communities and improve their durability during these trying times. Innovative and inclusive actions that make sense for the climate, local businesses, and the sustainability of communities are critical as we reshape our economy.

Maine’s marine businesses have a history of adapting to challenges and can lead as early adopters of innovative resiliency strategies.

Want to learn more?
A Maine climate mitigation strategy that is good for shellfish businesses will be highlighted on June 11 during the UN World Oceans Day 2020 event, “Advancing Knowledge into Action – Innovative Solutions to Address Impacts of Ocean Acidification.” The presentation, “Kelp Farming as Strategy for Remediating OA and Improving Shellfish Cultivation,” will feature work from a multi-year research project being done by Bigelow Laboratory for Ocean Sciences and the Island Institute.  Learn more here. 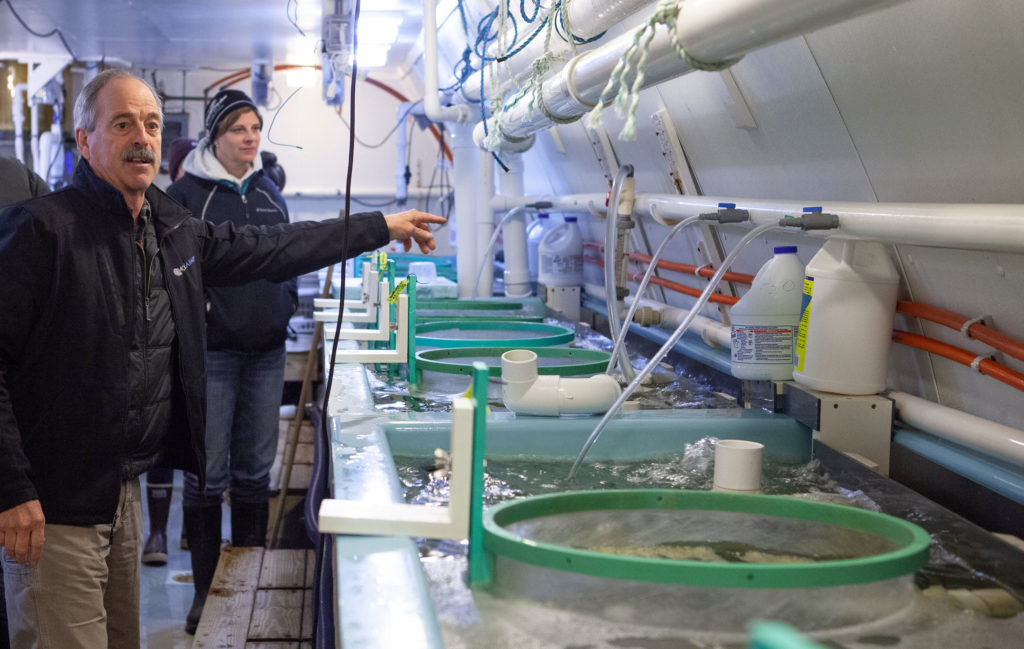