I am one of the lucky ones. I am one of the people in this vast world who has had the true privilege to be greeted by Ashley Bryan at his front door and invited into his home. Ten years ago this spring, Peter Ralston and I traveled by mail boat from Northeast Harbor to Islesford to see Ashley is his studio, hear his stories, and tour around the island. It was my dream to put together a show of his work for the Archipelago Fine Arts Gallery, and we were blessed to be able to do a studio visit. Teri, Peter’s wife, joined us as well as Leo, my seven-month-old son. This was his first island trip and what a trip!

I had known of Ashley through his award-winning children’s books like, Beautiful Blackbird, that we sold at the store and wanted to showcase anything he’d be willing to share in our Rockland gallery. Many of his award-winning, 50+ children’s books are illustrated with papercuts that he cuts by hand using his mother’s dressmaking scissors. I hadn’t truly appreciated the depth, breadth, and width of Ashley’s creative spirit until I walked around his home studio. Puppets, sea glass stained windows, drawings, collage, paper cuts, paintings—so many different media. Seeing Ashley share his art with us, it was so clear that his energy, life force, and spirit need to be expressed through whatever materials he could get his hands on. This was certainly true for Ashley during his early years, as he’s well known for carrying scraps of paper and crayons in his gas mask during World War II. There are many examples in Ashley’s life of how he transformed a traumatic experience into a creative one. For me, this is the most inspiring aspect of who he is.

Ashley shows us some of his paintings during our visit to his home in 2010.

That spring day, I was truly in awe of his energy at 87 years old—how he managed to accomplish so much, be so fully engaged with his life, and bring such joy to the lives of others. Art was all around in his home—his art, art of others, tapestries from special places around the world he visited, wooden toys he collects. In his studio, there were many paintings he had just painted, piles of notebooks of sketches, paintings from 30 years earlier, puppets made from shells and other discarded objects found on one of his favorite beaches, and several sea glass papier-mâché windows in process. He showed us how he works on them slowly and with an artist’s careful intention. And, he graciously shared the draft illustration pages for his upcoming book spread out on the table.

From one thing to the next, each project and each piece of art was more inspirational than the one before it. His endless energy, overflowing joy, and desire to make heartfelt connections with each person he meets are the qualities brought to mind when I hear the name Ashley Bryan. His new book, Infinite Hope: A Black Artist’s Journey from WWII to Peace, tells of his story of infinite hope. (see “A journey of infinite hope, faith, art—and prejudice,” The Working Waterfront, 1/22/20)

Infinite hope. These words struck me so deeply back in March during the early part of the quarantine, and I again remembered the spirit that is Ashley Bryan. The words cut through the stress and anxiety and pinged my brain right back to my visit with Ashley 10 years earlier. That tightness I’ve been feeling in my chest isn’t COVID-19, it’s grief. Individually we all surely have grief about the many losses we’re experiencing. If anyone has suffered numerous traumatic experiences, it’s Ashley Bryan. And, he has responded with love, with art, with wide, wide open arms, and with generosity.

The pandemic is hitting all of us, and we’re all grieving, collectively. We’re not used to this kind of collective grief from our collective trauma hanging in the air. How are we handling it?

It’s part of his way of connecting and sharing stories. I remember looking at him in amazement and thinking, “If this man who has been through so much has so much optimism, joy, energy, and creativity, then surely there is hope for me—for all of us.” You see, I was feeling exhausted with my second child and working full-time, and wondering how/when would I ever have time to be creative, artistic, and bring my gifts to the world.

You are probably familiar with the five stages of grief as modeled by Elisabeth Kubler-Ross. What you may not know is that she co-authored a book with David Kessler called Finding Meaning: The Sixth Stage of Grief. To move through the grief, there is the creation of meaning.

In society, artists are often key translators and communicators of meaning. They are the sensemakers and processors, giving voice to the hidden, unseen, and aspects of ourselves and society that have no words. An artist is capable of turning simple materials into objects with spiritual and aesthetic significance to create meaning. None I’ve met do that more clearly than Ashley. Taking sea glass found on Islesford beaches, placing in space with papier-mâché made from old newspapers to tell the stories of the life of Jesus Christ and his disciples. Making paper cutouts to illustrate and impart African proverbs to children. He has taken his own traumas and responded with endless creativity, passion and infinite hope.

How will we as a society respond to our collective grief and our collective trauma? As people, as creatives, as artists, or not? It is around us each day in the window decorations of people’s houses, the Easter egg pictures displayed for a hunt in my neighborhood, a potter turning to cartoons to put out important messages, clothing and wallet manufacturers pivoting to make PPE, children learning to cook, sew, and send handwritten notes to friends.

I think of Ashley often and think about the difference one person can make to another person at any time, and I am so grateful to not only know Ashley, but to know many, many creative people—artists and others—working to find and make meaning in my life every day, helping me move from the grief, little by little.

Ashley Bryan signs books for families and children at the show opening in 2010. 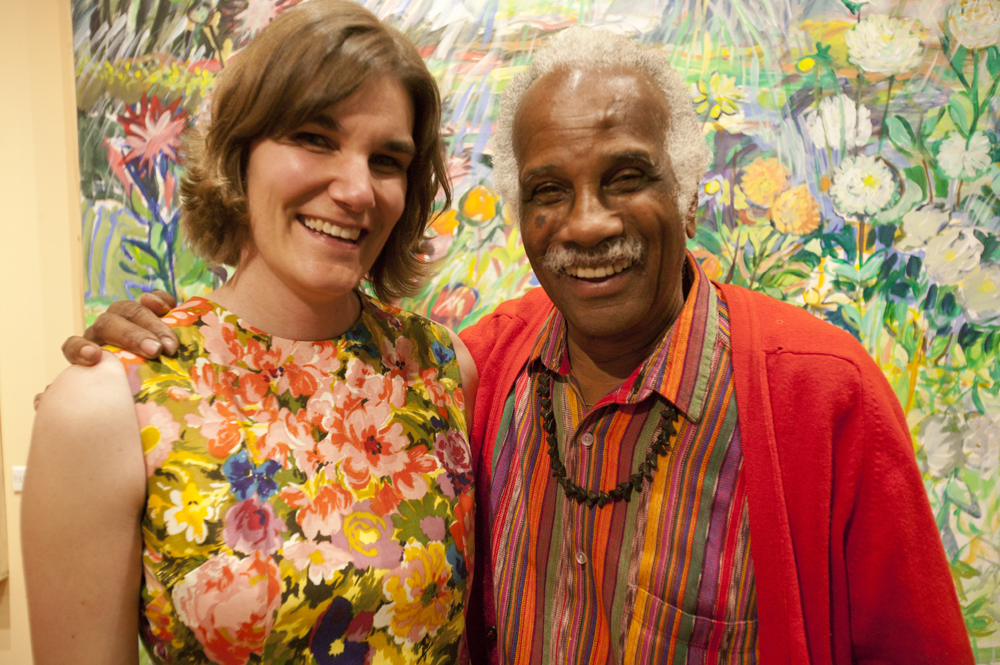 Archipelago Director Lisa Mossel Vietze with artist Ashley Bryan at the opening of his show in the Archipelago gallery in 2010.