Tony Matoin loaded his groceries into his company pickup truck outside Shaw’s. He had just finished a shift as a line supervisor for Central Maine Power and was headed home to Springvale.

Then a man pulled up in his own vehicle and yelled at Matoin.

“He said get the ‘blank’ out of here and go home.”

Matoin, who has worked for the Maine utility for nearly 33 years, was confused until the man shouted a derogatory name for people from Massachusetts and sped off. Then he remembered. CMP rented more than 100 extra vehicles so crews who usually drive together can get to job sites without carpooling during the coronavirus pandemic. The rental he was driving had license plates from the Bay State.

The 59-year-old Matoin said the experience was surprising, but he understands that people are afraid as the coronavirus spreads, especially people who might now be unemployed because of it.

As public health officials encourage people to keep their distance and stay home, many Mainers are worried that big city residents hoping to get away from virus hot spots will seek out the state’s secluded islands and small towns. Parts of the state with histories and economies tied to hosting out-of-state visitors are now fearing their arrival, in some cases by issuing official orders to try to keep them away and in others by confronting suspected outsiders directly.

Available data does not suggest that tourists or summer residents are flocking to rural havens in large numbers, but anecdotal examples and the quick spread of the virus have fueled those fears nonetheless.

It’s a growing concern as summer approaches in a state that has branded itself as Vacationland. Maine’s population is just 1.3 million, but it had 37 million visitors in 2018.

Local officials are trying to send messages that are kind but firm to seasonal residents, knowing those people may have longtime ties to their communities. Some towns and cities have banned short-term rentals or closed hotels and campgrounds.  This week, more than 23,000 people signed an online petition titled “Keep Tourists out of Maine until May 2020,” calling on Gov. Janet Mills to close the state’s borders to most travelers.

“If the people of Maine are restricted to the people they come in contact with, are told to close their businesses, cannot go to work, cannot go to school and cannot get the supplies they need, we should not be allowing non-Maine residents to flood our state to ‘get away’ from COVID-19,” the petition states.

Mills said said she has no authority to close the border.

Late Friday, however, Mills issued an executive order mandating that anyone who comes to Maine, regardless of where they live, must self-quarantine for 14 days to help slow the spread of the new coronavirus infection. The order also mandates the suspension of all lodging operations, including hotels, motels, bed and breakfasts, inns and short-term rentals, as well as RV park and campgrounds.

The concern about people coming to the state from coronavirus hot spots highlights the tension between Mainers and people “from away” that has persisted for centuries even as the state is dependent on its tourism economy, said Kreg Ettenger, director of the Maine Studies program and an associate professor of anthropology at the University of Maine.

“There’s always been that tension and a little fear. Now it feels more real with people coming from areas that are hard-hit by the virus,” Ettenger said. “Not knowing how that’s going to impact the rapid spread in our state has added to what is already sometimes a tense situation. It’s been magnified by the fear of the unknown.”

But, Ettenger said, it’s important to remember that the pandemic will not last forever.

“When it’s over, how do we want to be remembered – as the state that tried to close its door on those seeking shelter, or the one that pulled them into the lifeboat?” he said. “The long-term future of Maine depends on being seen as a welcoming place for visitors, not a place that fears and rejects them. We’re going to have to find a way to all deal with this crisis together, Mainers and visitors alike.”

Steve McCausland, spokesman for the Maine Department of Public Safety, said the fear of outsiders reminds him of the days after the 2001 terrorist attacks when state police were inundated with calls from Mainers suspicious of people who looked like they weren’t from here. And he warned about jumping to conclusions. There are a number of reasons people have cars without Maine plates, including health care workers coming to help respond to the coronavirus crisis.

McCausland is blunt in his assessment of the harassment: “It’s unacceptable and it needs to stop.”

March is already a stressful month for many islands, as the winter lingers on and the earnings from last summer run low.

“This has always been a difficult time of year on the coast, regardless of the pandemic.” said Rob Snyder, president of the Island Institute.

Then, add that pandemic. 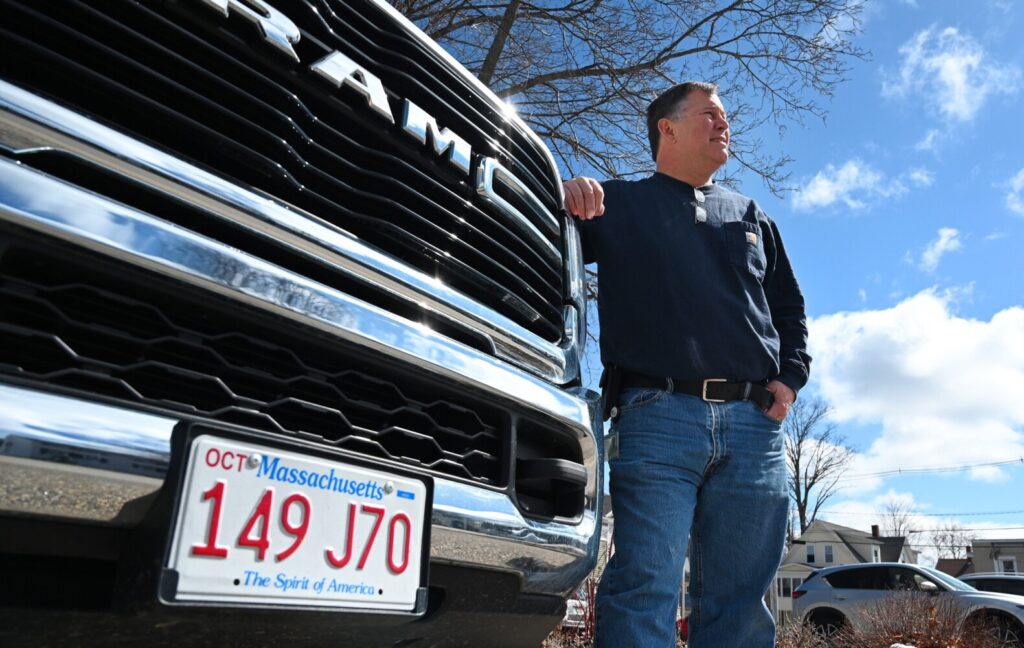 Tony Matoin, a CMP line supervisor who lives in Springvale, drives a company rental with out-of-state plates. He says he recently got an earful from a fellow driver who told him to “get the (blank) out of here and go home.” Shawn Patrick Ouellette/Staff Photographer