Anyone who has collaborated with others on a project knows that it usually takes a lot more time than simply going it alone does. And if the collaboration involves multiple schools and nonprofit organizations, you’re going to need a healthy dose of patience, persistence, and probably some money. These can be formidable barriers for most adults in schools and organizations, which is one of the many reasons why the staying power of the Kelp4Kids after-school program on Peaks Island, run by high school students from Baxter Academy for Technology and Science, is so remarkable.

Now in its third year, Kelp4Kids was started by Baxter alum Emma Christman (currently a sophomore at Bates College) as part of her Flex Friday project, a program in which each pupil works on a student-led yearlong project every Friday. This allows students’ creativity to flourish, while still educating themselves in hands-on, self-motivated ways.

Emma was inspired by an after school kelp collaboration between the school on Long Island and the Island Institute and contacted the Institute about doing something similar on Peaks. A flurry of activity ensued, including connecting with the After School Academy on Peaks, finding a suitable site to grow kelp and apply for an LPA permit, developing the curriculum, partnering with the scientific community at The University of New England, and fundraising, among many other things. While Emma was busy creating this program from scratch, she was also thinking ahead to how it could be more than a one-year, one-time project and had the foresight to recruit a younger Baxter student, Darcy Ross, to help and eventually lead the project after Emma graduated. Darcy, now a senior, co-runs the project with a younger schoolmate, Aurora Guecia, who plans to continue the trend.

Kelp4Kids kelp line is short (about 50 feet) and multi-layered due to its located under a dock for easy access.

There are many reasons that these students have been drawn to the Kelp4Kids project, including environmental, economic, and educational concerns. Maine’s particularly vulnerable position regarding the changing climate is that marine resources are a vital part of our economy and they are threatened by warming waters and pollution. Kelp improves local water quality by reducing ocean acidification, and kelp farming through aquaculture offers an opportunity to combat climate change, while providing sustainable jobs for local residents. Programs like Kelp4Kids help educate and recruit the kelp farmers and consumers of tomorrow.

The program is divided into two sessions, each several weeks long—one in the fall and one in the spring. At the beginning of the fall program, the kids learn about kelp and the marine environment. Then, by the end of the fall session, the kelp lines, ropes covered with sugar kelp sporophytes, are deployed into the ocean. This year, the kelp lines were put in on a dark, cold, and snowy afternoon in mid-December.

Maine is a perfect place to experiment with kelp farming, because kelp flourishes in cold waters. This kelp will grow throughout the winter and into the spring. In the spring, teaching will resume on Peaks Island—covering topics such as climate change, ocean acidification, and the marine environment at large. During the spring session, the kelp is harvested and used in the classroom to study its anatomy and make delicious kelp treats for the students. The students are hungry to learn as much as possible about their world, get their hands dirty, and then eat at much raw kelp as possible—even if there are little snails on it!

Aurora recently interviewed Tyler DeAngelis, a science teacher at Baxter Academy and an advisor of Kelp4Kids, for a research paper on this project, who said that having children and students work with their local environment, “cultivates a sense of responsibility.” DeAngelis emphasized, “There is a way to utilize [our] natural resources while also preserving [them].”

The importance of Maine’s aquaculture communities as a key component of Maine’s economy and environmental sustainability is a driving force behind these students’ commitment to sustaining the Kelp4Kids project. In an interview with Sam Feldman, an additional educator and advisor of Kelp4Kids said, “There are a lot of people that live on Peaks Island, or live in coastal Maine, who are not connected to the ocean. They live there, and may like to walk on the beach, but they do not really know what is there or what is going on. They are not directly dependent on that habitat and the health of that habitat, so to create more awareness and more of a realization of how directly we all rely on the health of the ocean is the primary success of what Kelp4Kids does.”

According to Aurora, Kelp4Kids is a simple program designed to engage and educate young children so that they will be part of the answer to climate change, in Maine and beyond. In other words, large-scale, global efforts can be supported by a multitude of stakeholders who are able to nurture direct, local resource-minded economies and communities.

Kelp aquaculture is a promising part of Maine’s answer to climate change and economic sustainability, as are Emma, Darcy, Aurora and the elementary students on Peaks Island. You can visit their website here: https://kelp4kids.wixsite.com/website

Liz, Aurora and Darcy heading back to Portland on the ferry after braving some Challenging conditions to get the Kelp4Kids kelp line in. 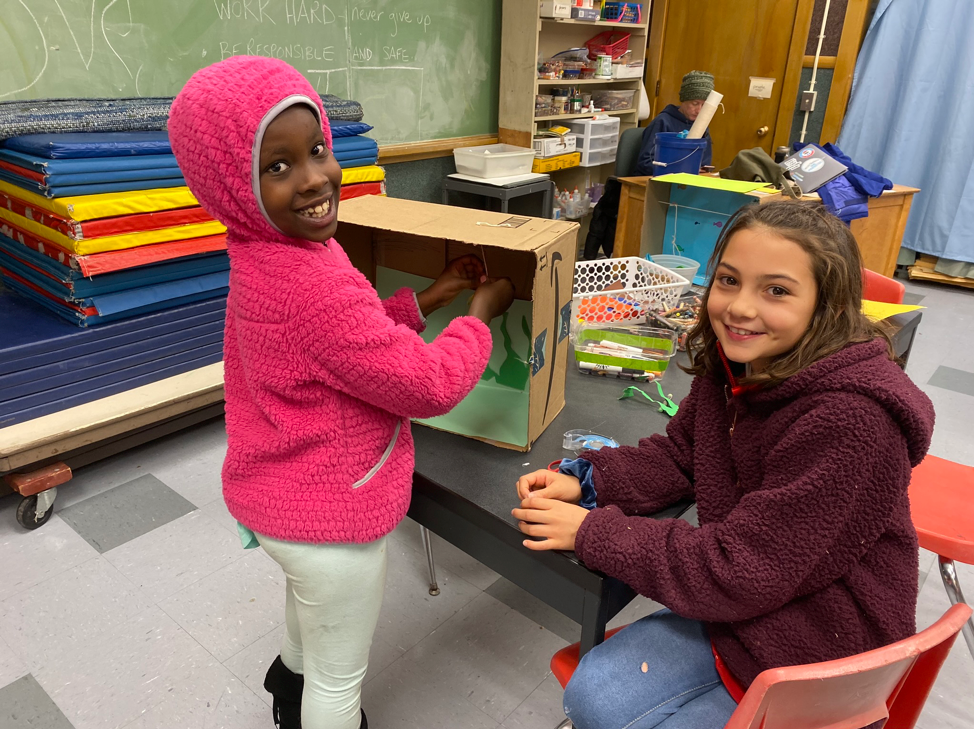