“More than 30,000 Mainers rely on marine-related industries for their livelihoods. Yet out of five thousand miles of coastline, just 20 miles of workable waterfront remains in the state,” said Pingree. “Coastal communities across the country are feeling the same squeeze. Further reducing our usable coastline will adversely impact everything from aquaculture and boatbuilding, to coastal tourism and commercial fishing.”

Pingree’s bill seeks to preserve the character of coastal communities by protecting jobs, commercial activities, and public access to America’s coast. H.R. 3596 would:

Pingree’s bill passed as a part of H.R. 729, a package of ten bipartisan bills aimed at protecting vulnerable coastal and Great Lakes communities impacted by the climate crisis.

Pingree has long advocated for federal resources to help Maine communities preserve and expand shoreline access and infrastructure for water-dependent industries, such as fishing, boat building, and aquaculture. Her bill to study and combat ocean acidification, H.R. 1716, the Coastal Communities Ocean Acidification Act, unanimously passed the House of Representatives on June 5, 2019.

“Fishermen are a crucial part of our food system and supply our nation with high quality sustainable seafood from wild harvest and aquaculture sources. Much like we invest in local agriculture and infrastructure, we must to find ways to invest in our working waterfront to ensure access and opportunity for fishermen, families, and the next generation. This is a step in the right direction towards that end.” –Ben Martens, Executive Director, Maine Coast Fisherman’s Association

“The Keep America’s Waterfronts Working Act will help Maine’s coastal communities preserve, improve, and protect waterfront infrastructure vital to the state and the nation’s coastal economy. Working waterfronts are critical, around that nation, for access to coastal and marine resources, from fish and shellfish to offshore wind. The Working Waterfront Grant Program would provide essential support for coastal communities, including recreational and commercial businesses throughout Maine and the US, to plan for and adapt to changing economic and environmental conditions.” –Gayle Zydlewski, Director of Maine Sea Grant 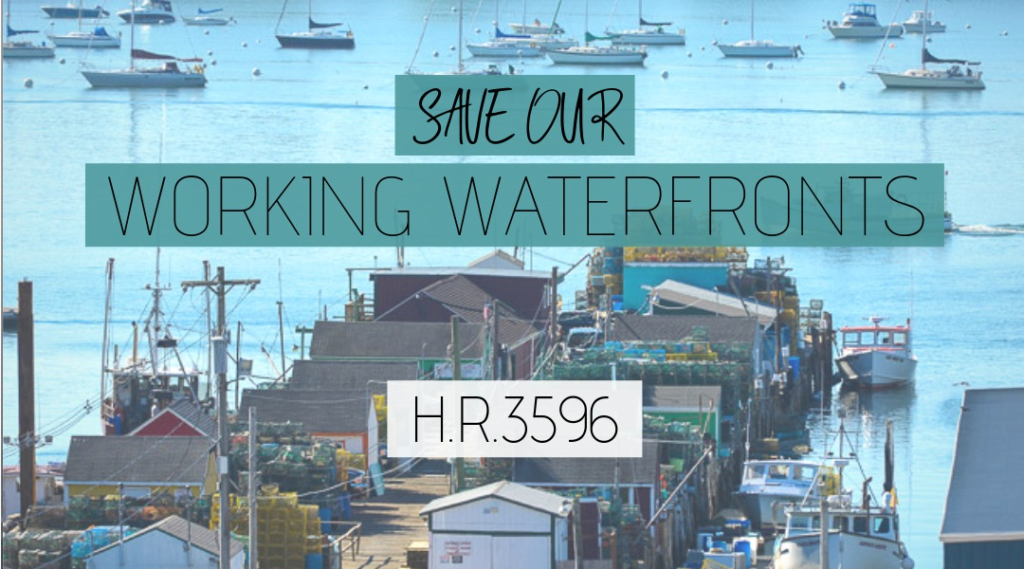