Teaching in island schools is so unlike teaching in larger mainland districts. That’s why the Island Institute’s Island Teachers Conference is so valuable—it offers a unique opportunity for island teachers to access relevant professional development and network with other island teachers. An impressive hallmark of this conference is the way in which its organizers are so responsive to feedback. There is a real eagerness on the part of the Island Institute to meet the changing needs of island teachers, and each year they tweak the conference in both large and small ways to provide the most meaningful and worthwhile event.

One way this fall’s conference was different from previous years was location, location, location! The streets and local businesses of Rockland, Maine, during the peak of the fall foliage, became the venue for this year’s conference. Thursday’s scheduled workshops began as a gathering on the fourth floor of the Island Institute before we all scattered here and there around Rockland, exploring our own backyard so to speak. That evening everyone met back up again on Main Street at Ada’s Kitchen for an evening of great food and drinks, visiting with fellow island teachers we rarely get to see, and making new connections. On Friday, we were lucky enough to spend the entire day attending workshops hosted at the newly completed Mid-Coast School of Technology building. Between the small-town feel of the streets of Rockland and the impressive new facility of Region 8, this year’s conference had an even more cozy and connected feel than year’s past. Nearly every teacher I chatted with over the course of the two days was in complete agreement.

Island teachers Heather White of Vinalhaven and Jan Keiper of the Cranberry Isles connect during one of the Rockland workshops on day one of the conference.

I’ve been attending this conference for as long as I can remember, and each year is unlike the one before. Some years there’s a focus on English Language Arts, while others the topic is more driven by the sciences or place-based learning. As for this year, there was a significant focus on the arts, as well as a priority on self-care for teachers.  Full disclosure: I teach K-12 visual arts at the Vinalhaven School, and when I was reading through the listed workshops, it was impossible for me to choose which ones I planned to attend! Nearly every session offered something I could apply directly to my classroom. Not only were there offerings such as visits to local art museums such as the Farnsworth and the Center for Maine Contemporary Art, but there were also literacy workshops, sessions addressing climate change, as well as a tour of Bixby & Co. Chocolates, and many more! As for teacher self-care, we could sign up for anything ranging from a dance and yoga to rowing in the harbor in a pilot gig (not to mention the chair massages and body work sessions). Needless to say, it was an impressive list of offerings and anyone would’ve had a hard time making their selection.

In addition to the workshops, teachers could also sign up to spend a session with teachers from their same discipline to share “One Cool Thing” from their teaching that they felt was a success and that other teachers may want to learn about. I met with other arts/specialists and was impressed by what everyone had to contribute. So many ideas & resources were swapped in that one little session, that we all walked away with a handful of ideas we could try out in our classrooms right away.

Teachers take part in one of the arts sessions during the conference workshops.

Island communities are nestled in the most beautiful areas of the state with lots to offer. Taking the time to slow down and be reminded of the opportunities all around us is so valuable. The Island Teachers Conference is a special event, that each year dedicates itself to highlighting those beneficial resources we have available to us right here in the Midcoast and just beyond. People who don’t live and work on islands might mistakenly think it’s limiting to teach out in these island schools. However, island teachers aren’t limited at all—in fact, far from it—and this conference serves as a yearly reminder as to all of those local resources we can tap into!

Heather White is a teacher at Vinalhaven School on Vinalhaven Island in midcoast Maine. She teachers visual arts to K-12 students in the school. 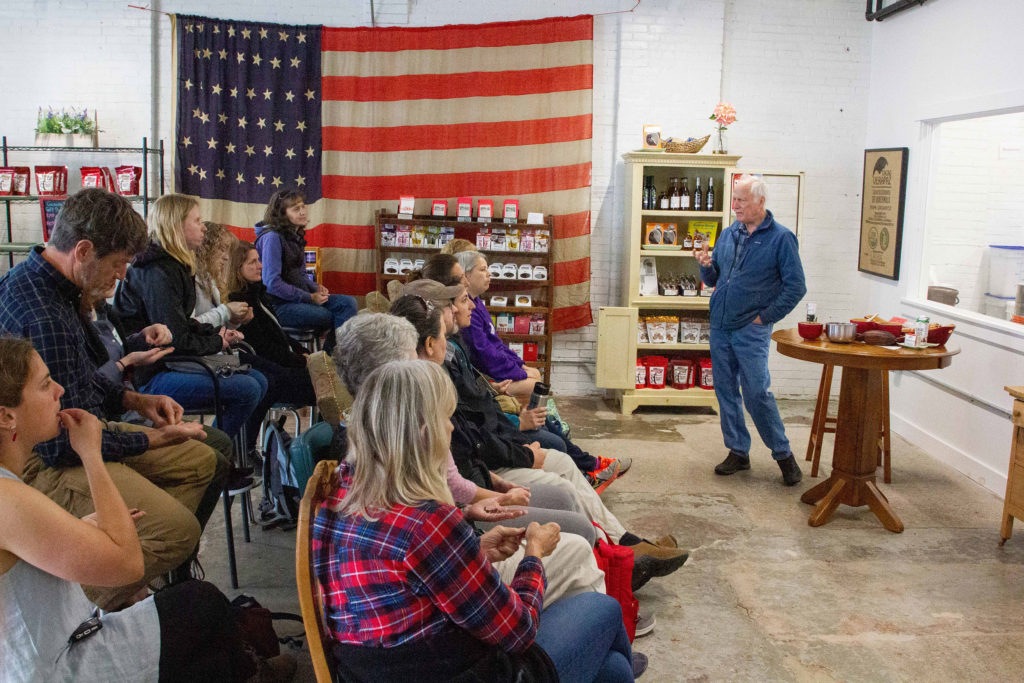 Participants get a tour of the Bixby & Co. chocolate factory during the first day of the 2019 Island Teachers Conference.