Through my summer internship at the Island Institute, I recently had the chance to join other staff members on a visit to Isle au Haut earlier this month. For anyone unfamiliar with this area of Maine, Isle au Haut is an island within Knox County, and a portion of the island is part of Acadia National Park. The island is small, with a year-round population of around 71 inhabitants, and the landscape is made up of blooming trees and oceanfront views. The houses are surrounded by beautiful gardens and vintage trucks and home to the very warm and welcoming people of Isle au Haut.

When we first docked on the island, we were introduced to Molly Seigel, an Island Institute Island Fellow and a recent graduate of Dartmouth College, who is currently providing the island community with support for a telemedicine facility and affordable, sustainable year-round housing. Molly greeted us with a warm welcome, and we walked to her newly purchased truck, which a friend recently sold to her for just one dollar! As she drove us to lunch, hosted by Nancy Calvert, a local of the island, we passed children playing catch on their front yards, visitors of Acadia, and locals taking an afternoon walk.

Before entering Nancy’s charming yellow house, we admired her garden which had a vast amount of flowers and vegetables growing in it. As we passed through the vine-covered archway and entered the home, we were greeted by Michael Delchamp, manager of The Island Store (the only market on the island), and the store’s board members Doug Evans, Grady Watts, and Nick Filler.

Nancy made a delicious Maine island lunch for all of us that included homemade haddock chowder, egg and chicken salad sandwiches, and even homemade strawberry rhubarb pie. During lunch we spoke about the hopes and plans for Isle au Haut. The store’s board members explained how they wanted to build a food truck to help create more jobs and draw visitors to the island. They also explained some of the issues with The Island Store. It is the main contributor to the local economy but lacks major key elements like packaged food or a bathroom. The employees of the co-op are hoping to open a second food truck on the island that will sell sandwiches, drinks, and other packaged food for day visitors on the island. The Island Institute will help provide the resources needed to begin the process of creating the food truck and other possible revenue ideas for the town.

After lunch we visited The Island Store, where visitors and locals can shop for canned goods, produce, toiletries, and snacks. The store is the only place on the island where people can shop for their groceries or pick up things they need for around the house. Next to the store is the only food truck and alternate food source on the island, owned by a woman who is simply known around Isle au Haut as the “Lobster Lady.”

In addition to the food truck and store, we visited Shore Shop Gifts, which sells sweaters, trinkets, and postcards for the visitors to the island. As we made our way to the entrance, we noticed the unique artwork that detailed the path—maps that marked where visitors lived, a poster of a lobster, old lobster traps, and chairs to sit. Inside, small and large sculptures of lobsters decorated the walls of the shop. Kendra Chubbuck, the owner of the shop, stated that almost all the revenue earned is contributed by visitors during the tourist season. After a brief look around, we said goodbye and made our way back to the boat.

Having never been to the island before, my visit to Isle au Haut was truly an unforgettable experience, and one that I would have never been able to be a part of without the Island Institute. The people of the island are some of the most welcoming people I have ever met and are hugely invested in their community. I left the island feeling hopeful and excited for the future of Isle au Haut.

Editor’s note: Anastasia Sapirstein is a summer Events Intern for the Island Institute and is assisting the Events and PR/Communications teams with events and projects for the Institute. A student at Eckerd College in St. Petersburg, Florida, Anastasia is a Communications major with a double minor in Marketing and French.

A wheelbarrow of supplies overlooks the water on Isle au Haut. 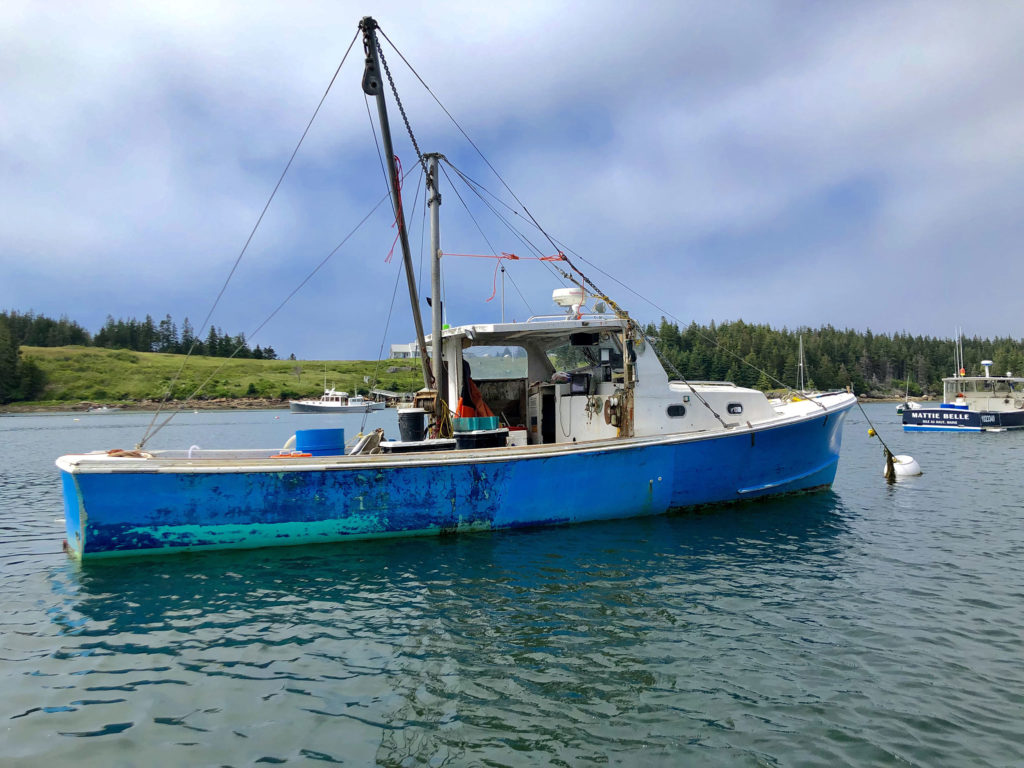