If you spend enough time in Rockland, Maine, you may have seen a woman of medium stature walking up and down Main Street, tending the pollinator garden by the harbor, or sipping a cappuccino at Rock City Coffee. She is artist, gardener, educator, and Rockland resident, Susan Beebe.

This past winter, I asked Susan if I could interview her at her “studio” space. There was a hint of reluctance. You see, her true studio space is outdoors, and she knew I wouldn’t get an authentic view into her working space during one of Maine’s coldest months. Thankfully, she acquiesced and on a cold day in February, I sat with Susan Beebe in the studio and gallery that she and her husband share, the Jonathan Frost Gallery. Huddled around a couple of space heaters we talked art, midcoast Maine, and even a spattering of politics.

Susan’s arrival in Maine seems very much played by the hand of fate. She came to Friendship Long Island via Connecticut for a summer as a babysitter. Ten years later, her mother Barbara bought the vacant house Susan had grown to love during that first summer. Upon purchase, Susan and her mother, also an artist, moved into the house full time. For over thirty years, they lived without electricity, observing the changes throughout the season and the way the light ebbed and flowed.

“I really became an artist when I moved to the island, because being out there forced me to create and also taught me a lot about light.” – Susan Beebe

Living this way, not to mention the beauty of the island, helped both of their art blossom.

Susan Beebe, now a working artist who lives in Rockland, still finds inspiration and beauty on that small island off the tip of Friendship, Maine. Her mother lives there at least half of the year, while Susan’s time and attention spent there, year after year, allows foresight to different events in nature. A strong interest in biology has developed Susan’s keen eye for subjects in nature as she keeps up with her studies of plants, birds, and insects, an area of particular interest for her. As a young adult, there was much thought on whether to study biology or art. Thanks to some great art teachers (and not so stellar biology teachers), Susan decided upon art. There was also the allure of greater freedom in art than in science.

Today, all of Susan’s outdoor landscapes are painted from life. Being outdoors is a part of her process—even when she has to endure conditions that aren’t always pleasant, such as mosquitos. Thankfully, she hasn’t had a problem with ticks, but is aware of them. Her vast and continuing knowledge of local flora and fauna allows her to identify her subjects along with their relationship to one another.

“Lupines by the Woodshed” by Susan Beebe

“It’s a visual pattern, but I am also very aware of what animals are living there and what plants are living in that habitat,” said Susan. “The two things, the beauty and the science, are intertwined and equally important to me.”

This certainly comes through in her paintings. Whether a wooded landscape, flowers near the back of her house, or a study of an owl, there is this marriage of expression and respect of the subject.

Like many artists, Susan makes her living through a combination of art sales and other work. For her, the “other work” is teaching which she is doing more and more. Susan is a stalwart believer in fostering creativity and empowerment in kids. She is a mentor artist with LEAPS of IMAGINATION, a midcoast nonprofit organization with the mission “to ignite the imaginative spirit and inspire new ways on thinking so that young people can realize that their ideas have purpose and that they have the courage to act on them.”

Thinking through LEAPS projects for the school classes invites the freedom to explore different materials and perspectives. Imagination flies even higher into the wind of creativity as the kids take their own perspective and execution to the project. It should be said that Susan and LEAPS are not teaching art for the sake of art. There is a keen sense to empower youth through creation and expression. Susan delights in hearing what the children have to say and relates to them. She shares her gift of art and listening, while they in turn delve into burgeoning creative spirit and offer up fresh perspective. She finds inspiration there, often shifting artistic direction based on what is coming in from the experience. When I asked Susan what she would like to see more of in Rockland, she responded that more should be done for kids but understands that there are resource restrictions.

Susan sees the power that art lends to activism and has even been arrested for standing up for the local environment. In 1999, the Maine Department of Transportation chose to widen Route 1 in Warren in a manner that included the removal of numerous large trees. Susan painted one of the endangered trees, a horse chestnut known as “the elephant tree” and was arrested after refusing to come down out of its branches. By the end of the project, seventeen people had been arrested both in protest of the project or for threatening the protesters. Later in court, Susan was able to use her painting as evidence, since the “elephant tree” was cut down during the project.

More recently, Susan joined a substantial number of artists who protested Governor Paul LePage’s removal of Frances Perkins’s name from a conference room and Judy Taylor’s mural depicting images of the labor movement at the Maine State House in 2011.

“[Frances Perkins] is a Maine woman we should all know about—and I mean, that’s the thing, I had never heard of her until this happened,” said Susan. “She was the first US woman ever in the cabinet, she was appointed under President Franklin Roosevelt as the Secretary of Labor, and she is somebody that, especially as Maine women, we should know about. Somebody we should be proud of.”

Noting that “this is exactly how women get erased from history,” Susan discussed how she painted a large banner of Frances Perkins and joined a rally in Augusta to protest the removal.

As a Rockland resident, I was interested to hear Susan’s take of city’s identity as the “Arts Capital of Maine.” The garnering of this title has a lot to do with the fact that the city is home to both the Center for Maine Contemporary Art (CMCA) and the Farnsworth Museum, which celebrate Maine’s role in American art and feature collections of work by local artists and some of America’s most recognized artists. In addition, there are a healthy number of galleries, including a cooperatively run gallery and the Jonathan Frost Gallery. However, Rockland still maintains its roots in the working-class community. Currently, artists like Susan Beebe can afford to live and work in the Rockland area but recognize the shift as Rockland becomes trendier, especially for second homeowners.

There is the danger of Rockland’s working-class identity being uprooted, much like Warren’s trees 20 years ago, and Susan hopes that the area doesn’t become gentrified and push artists and lower income families and individuals to the outskirts where there are less resources. At this point, Susan comes back to her belief that there needs to be a greater investment in the area’s youth. When she worked with the Farnsworth’s program “The Stories of the Land and its People,” she saw that some of the kids from some of the rural schools were suffering from lack of resources.

“You never know where talent is going to be,” said Susan. “You need to nurture it and find it everywhere, and all kids should have programs and opportunities to support this. We just need to do more.”

She and other local artists are doing more. Susan lets us know that LEAPS of IMAGINATION has completed its first program in South School, right in downtown Rockland. Thanks to a new principal, they are working in a school where they have hoped to work for a long time, and there is still room for more participation in fostering our area’s youth.

While Susan doesn’t turn away from challenging subjects such as the removal of Maine’s mural of the labor movement or the trees on Route 1, she understands the importance of investing in our youth and giving them the tools and resources to find their passion and purpose. Through her art projects and studies, she strives to engage and empower others and share her love and knowledge of nature. Living a life of light with a drive to empower, Susan is a community member that we can look to for both inspiration and hope. She is—sometimes literally—carrying the banner, and she believes that by discovering our own purpose and passion, we can all find ours too.

Susan Beebe’s work is currently on display in the Archipelago gallery. For more information on Susan and her work, you can also visit her website.

Writer’s note: Thank you so much to Susan Beebe for taking the time to sit and chat with me and share her story. And thank you to Lisa Mossel-Vietze and Kim Ratner for encouraging me to go out into our community to start collecting artist stories. 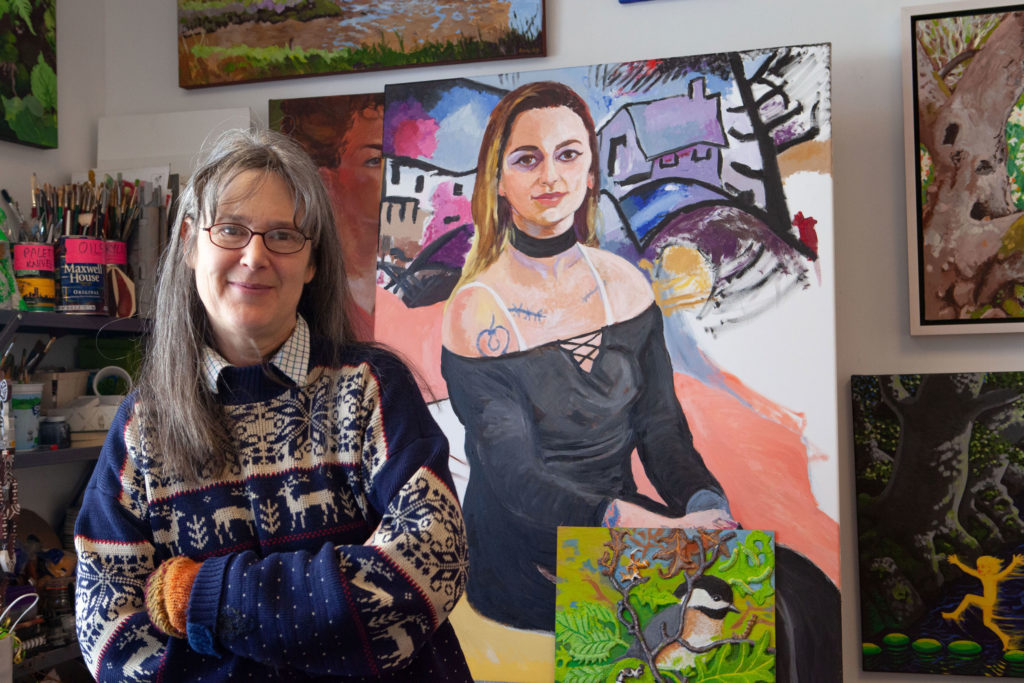