Downtown Vinalhaven sits on a mix of quarried rocks subject to erosion and vulnerable to inundation. When a selectman raised concerns in 2015 about “the inevitability of sea-level rise,” the board acknowledged, “We have to start talking about this; we have to form a committee,” recalls Vinalhaven Town Manager Andrew Dorr.

Dorr turned for help to the school, where students working on a climate curriculum began preliminary research and modeled inundation using a gingerbread town. After they presented findings to the board of selectmen, the town sought a grant to obtain an engineering assessment of its harbor area. That report confirmed the potential for more frequent and destructive flooding in coming decades — a plight Vinalhaven shares with many of the 144 communities in Maine’s coastal zone.

Global sea levels are rising at an accelerating rate, driven primarily by increased melting of ice in Greenland and Antarctica and the thermal expansion that occurs as ocean waters warm.

Just how much waters in the Gulf of Maine will rise — and how quickly — depends in part on global greenhouse gas emissions. Those reached a record high last year (with U.S. emissions up more than 3 percent), and scientists keep revising upward the sea-level rise projected in coming decades. “It seems like every time you turn around, it’s going up more quickly,” says Bob Faunce, a planner with Lincoln County Regional Planning Commission (until his retirement last week).

Five years ago, the highest sea-level scenario possible by 2100 was around 6 feet. Now, based on updated scenarios from the National Oceanic and Atmospheric Administration, it exceeds 10 feet. Marine geologist Peter Slovinsky, with Maine Geological Survey, typically suggests that communities plan on a minimum increase of 2 feet by 2100 and consider preparing for 4 to 6 feet, noting that those figures include no added storm surge. 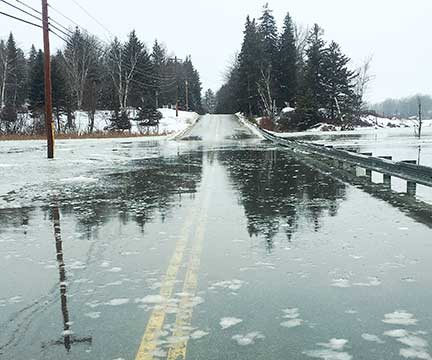 This road on Vinalhaven floods more than a dozen times a year (shown here during a high tide on Feb. 21