Success in our Island Fellows program comes from many different areas. One such area is our intentional integration of Fellows as full members of the communities in which they live and work. We all understand that this process takes time, requires patience, and that it looks and feels different for each fellow in each community. We support the fellows in this community integration by helping them focus on it as a goal in the first quarter of their fellowship. Fellows reflect, in writing, about that experience at the end of their first three months on their island.

The following entries are reflections from two first-year Fellows—Dan and Molly—who reflect on their first experiences living and working in an island community in Maine, and a second-year Fellow—Stevie—who reflects on her experiences after a year has passed.

For the first three months of my life here on Monhegan, most days have ended roughly the same way: a walk through town, loop around one of the backside trails, and then back through town again on my way home. These walks aren’t long, usually an hour at the most. But then again, Monhegan isn’t a very big island. Walking quickly, an hour or two will give you about enough time to cover it all. At any rate, these walks have served so many critical purposes that I couldn’t imagine my life here without them.

To begin with, there are the obvious mental, physical, and emotional benefits of these daily sunset walks on Monhegan. They keep me active regularly, put me in prime position for some spectacular sunset views, and allow me the much-needed opportunity to ponder all of the existential questions a twenty-two-year old naturally faces following their most adventurous life change to date. I expected all of these and certainly have not been disappointed by their profound, positive impact on my life thus far. However, two benefits of these daily walks that I didn’t foresee have been the degree to which these walks have contributed to my integration into the Monhegan community, and the way they have marked my time here, allowing me to reflect on the changes between my first walks and my most recent ones.

During my first few walks around the island, I began trying to ‘learn the ropes’ of Monhegan life:

“If you finish your hike at Lobster Cove, then the brewery is just around the corner.”

“That one, unsurprisingly, is called the Red House.”

“Have you been to check out the museum yet? It’s fantastic, and Jenn, the curator, is a good person for you to know out here.”

“We’re crazy busy right now, but we can’t wait to get to know you better once the tourist season wraps up!”

“This is actually our last week on island for the season, but it’ll be great to get to know you better next May!”

“Oh, and don’t forget to set up a grocery account at the store!”

I quote loosely, but you get the idea. These walks were a whirlwind of meeting new people, saying goodbye almost immediately to some, and trying to absorb as much precious knowledge as possible. Then on October 9th, the day after the last summer tourist boats of the season ran, my walks changed completely. On that day, three or four people stopped me in the road saying some variation of “Oh, we had seen you around the island, but didn’t know you would still be here after a couple weeks. You must be the new Island Fellow!”

Since this seasonal change, the walks have been less about observing everything I can in the community, and more about finding ways to make myself a part of it. Now on my walks, I stop to pet all of the island dogs and chat with their owners, wave and talk to Andrew if he’s reading on Zimmie’s porch, and run in to the store on my way home as much to see who’s there as to grab a dozen eggs. I’ve been surprised to see how critical the simple act of making myself present around town regularly has been to my community integration process so far. In truth, I think there are 10-20 people out here I would not have gotten to know nearly as well, or perhaps even met yet, without these walks. Even more encouraging, many others seem to be going on daily walks as well, likely for all of the same reasons I do. In the beginning, I went on these walks as a way to stand out in the community. Ironically, it’s now how I do my best to blend in.

Something I believe very strongly is that when we feel uncomfortable, these are the times when we are learning and growing the most. Yesterday, I spent at least fifteen minutes deciding whether or not to pick up the phone and call an older couple that are sometimes known as “the grandparents of the island.” I wanted to reach out to Bernadine about getting together to play music—she plays the accordion and I play the banjo, and we’ve talked about practicing together before—but I was nervous because I wasn’t exactly sure what I would say.

My generation is not used to actual phone conversations—we are so accustomed to texting, email, and video chats that talking on the phone gives us intense anxiety. Would they think I was being weird for calling? Would they even remember me? Would I be bothering them? I almost didn’t do it, but then I thought, “what’s the worst that can happen? They won’t want to talk to me, and I’ll hang up in 30 seconds.” What happened was that Bernie answered the phone and after a brief reminder that I was Molly with the banjo, and we talked for at least 10 minutes about various things: Christmas plans, the upcoming holiday concert, how I was staying warm in my house (not very), and the merits of woodstoves. Stories like these are teaching me to value small talk and the simple gesture of reaching out to others.

I used to think about “community integration” as differences between myself and the residents of this community that I needed to overcome. I came to the island with that mindset but soon realized that I would be much more successful in finding friendship and connection if I didn’t look at it that way. As someone who grew up in a small, rural community, I am used to being around people who work hard and take a DIY approach to many things. There is something pragmatic about the way people live here that feels familiar to me. I can extol the virtues of woodstoves like anyone else. I am comfortable driving my truck around town and backing into small spaces (although I have been made fun of for not parking in the town parking lot because I was afraid of the ice and not knowing how to operate the town’s ancient gas pump). I have found a few niches in the community that I am able to fill—although I am not a great musician, my limited command of multiple instruments has catapulted me to the forefront of the school’s Christmas pageant. I have connected with several people over the idea of improving the less-maintained trails on the island, and next week, I’m getting together with two other women to cut an old trail that has become overgrown. What I am saying here is that my most important “milestones” and successes as a community member have come from sharing my interests with the community. I don’t need to pretend to be an entirely different person in order to be a part of this community.

I think that sometimes I lose sight of the fact that people on the island still notice me. I’m not that crazy person anymore who walks everywhere and constantly looks confused, taking pictures and talking to herself. Instead I’m Stevie: going for a walk, only slightly confused, sometimes taking pictures, and not talking to herself, but singing to herself! So, it was kind of surprising when earlier this winter I got a really bad head cold and people noticed. I had been secluded in my house for the weekend and even took a sick day, so nobody saw me out walking, or running, or, although it’s a much rarer sighting, saw “Clementine,” my car. I had three different people drive all the way down the mile-long dirt road I live on to check on me. They later returned with soup after they saw my face (I remain optimistic that instead of looking completely disgusting, my face was just so enchanting that people decided to bring me offerings) and helped spread the word that no, I had not jumped into an unmarked white van to help a nice man find his kitten on the mainland, but was instead in bed, wearing cat pajamas, surrounded by tissues. It was a pleasant reminder that people do notice me; not as a novelty or an obvious outsider anymore, but as somebody they are used to encountering with a certain degree of regularity and that they cared enough to find out where I was when that regularity was interrupted.

This sense of community on the island comes with some drawbacks—everyone knows where everyone is at all times (which is an intimidating fact for a new, single person trying to make friends)—but it has many more positives. Kids run around with abandon, because the neighbors are busily “watching but not watching,” people will pick up your mail from TIMS (the island market) or the post office if they know you are working or off-island and leave it on your porch or kitchen table, and they will even be able to tell something is amiss if, for a few days, there is one less nutter dancing along the road as she heads to the museum and will check-in to make sure she hasn’t been kidnapped.

Applications for our 2019 Island Fellows program are being accepted through March 22, 2019—learn more and apply today! 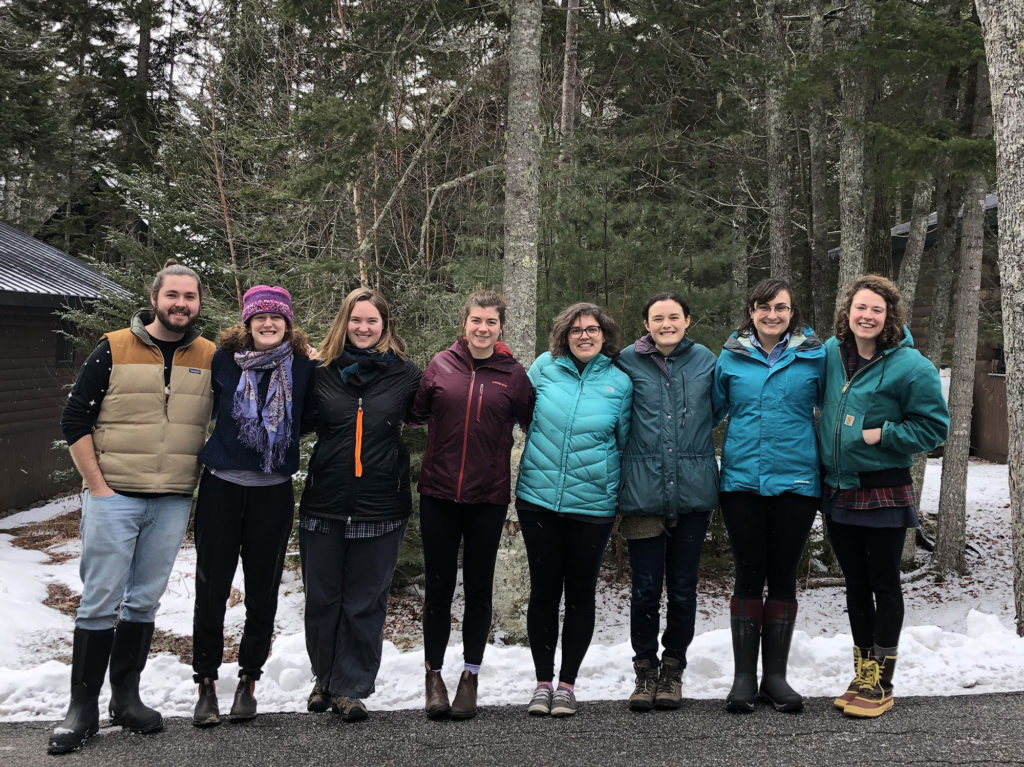 The 2018 Island Institute Fellows at their Spring Retreat earlier this year.