For many in rural America, it’s a struggle to find the cash and resources needed to button up a home against the winter cold. Labor and materials cost more – that is, if you can find them at all.

But in Maine and other rural states a variety of partners — church groups, non-government organizations and government groups — are ramping up efforts to close what some call the “rural efficiency gap.”

Leaky windows are a big heat loser in rural Maine. At a drop-in center in the town of Moose River, near the Canadian border, a half dozen volunteers are working to address the problem. They are assembling customized inserts that are easy to place in old window casements, adding much-needed insulation.

“This is one of the larger windows. It gets a little tricky,” says Bill Trahan, a local retiree from the neighboring town, Jackman.

“Figured I’d have a few windows made for myself,” he says. “And since they needed volunteers to help assemble these, I said ‘sign me up.”

Maine’s residents are more dependent on oil heat than in any other state, which helps explain the growing popularity of this low-tech, communal effort to reduce heating costs and greenhouse gas emissions.

“The production went from a few hundred a year at the beginning, up to a few thousand a year very quickly, and then it just kept on going,” says Richard Cadwgan.

Cadwgan and volunteers at a Universalist Church started what’s known as the “Window Dressers” program eight years ago in Rockland. Since then, he says, a growing cadre of volunteers has installed some 30,000 inserts, averting the emission of about 15,000 tons of carbon dioxide. And, perhaps more compellingly to customers, Cadwgan says that just ten of these simple assemblies will on average save a tankful of oil each year — about $300 worth.

“The customer will just say ‘you’re kidding,’ and I say ‘no we’re not,’” Cadwgan.  Many pay less than the $40-or-so the inserts cost. Sometimes low-income households may even pay nothing at all, with help from public and private grants and donations.

Window Dressers emphasizes working with local partners – in Moose River, Americorps and Unity College (part of a broader coalition called the Maine Campus Compact) were a big part of the effort.

For those who balk at a handout, Cadwgan says volunteers have a response: “Mrs. Jones, this bill is going to be $175.14,” he says. “We can waive that, if you would be glad to provide a crock pot of soup once during the season.”

The barriers that prevent rural households from accessing energy efficiency measures can seem particularly unfair. It’s older homes and mobile homes occupied by poorer residents that need help the most.

“People are having to ask the question of whether to heat, or eat. It’s really an unfortunately all-too-common predicament,” says Suzanne MacDonald, an analyst at the Island Institute.

The Island Institute recently studied the heating cost challenge in four rural states, including Maine, New Hampshire, Vermont and Alaska. MacDonald says that community-based organizations and governments are responding by convening workshops, providing temporary housing and travel help for insulation contractors, bundling several jobs or purchases to achieve economies of scale. The key, she says, is to make “the barrier entry low.”

“Supporting do it yourself or DIY opportunities is a great way to get people to take a first step and start thinking about how they might prioritize energy efficiency in the coming years,” she says.

The strategy is working for Catherine Reed, a 74-year-old widow who put in some sweat equity building inserts at the workshop in Moose River. She picked up ten inserts for her drafty farmhouse.

“Living on the hill, it’s an old house, 1842, the wind blows right through the walls,” Reed says. “So this should help me, and I am just so pleased and blessed to have them.”

The effort has got Reed thinking about other ways to improve her home’s efficiency. Next month she’s attending another workshop — this one on how to get help with a “home energy audit” and maybe with installing some new insulation.

listen to the full story here 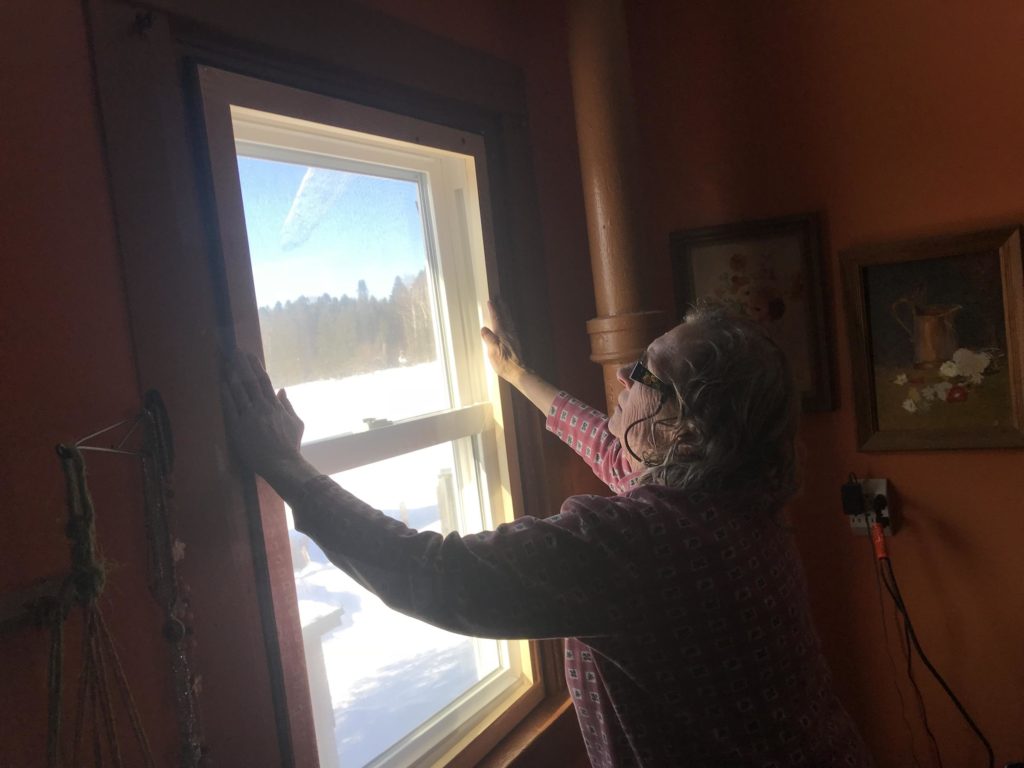