Greenhouses consume a vast amount of energy: to keep the temperature steady, to keep fans going, and to keep grow lights running in the shoulder seasons. It was the energy use of greenhouses that originally lead Bill Bailey of Bailey’s Greenhouses to learn about available renewable energy resources. Each year, he hosted open houses to demonstrate the economic benefits of alternative energy on the bottom line of his business. This lead him to a position on the board of Cheq Bay Renewables, where he organized the single largest solar photovoltaic group buy in Wisconsin and in one of the state’s most rural regions, and he continues with the open sharing of his knowledge.

At the latest Great Lakes Islands Summit, held October 1-2, 2018 in Madeline Island, Wisconsin, Bailey explained that buying and installing solar collectively makes it more cost-effective for the contractor and those savings get passed along to participants. This year, there were 75 participants buying a total of 445kW of solar capacity.

Bill Bailey was one of two energy experts that presented during the summit. Larry Bean, a seasonal resident of Madeline Island, served as the director of energy efficiency and renewable energy programs for Iowa and before that for an investor-owned electrical utility. Bean shared his passion for energy and micro-grids with the group of other Great Lakes islanders around the table and talked about the municipal solar project he has spearheaded as chairman of the La Pointe Energy Committee on Madeline Island.

The committee started by conducting wind and solar energy assessments for the island in order to provide information for homeowners interested in pursuing alternative energy and wondering if it was even feasible. In 2015, the Town of La Pointe passed a resolution supporting the Energy Committee’s work to make the municipal buildings energy independent. Since that time they have built arrays to support the energy use of the library, clinic, town office, and transfer station with plans to also install an array for the EMS building.

The cost and creation of energy is reflected in so many of the challenges islanders brought to the summit, but they also came to share solutions. As the conversation about energy continued into the afternoon, the group learned that both Michigan and Ohio have tax laws allowing schools to put aside a portion of the mill rate each year to go toward capital improvements which can include energy upgrades. One principal talked about asking his town for a slight increase in the mill rate so that when the school needed the roof replaced, they would also have the money set aside to install solar panels. Another participant mentioned DSIRE, a website run by the state of North Carolina that provides free information on thousands of policies and incentives for renewable energy and energy efficiency, including state and federal incentives, loans, and grants that local committee could use as a resource. Knowing what funding might be available helped the community prioritize which projects to pursue first.

Many of the resources people brought to the workshop were gained from their own experiences working to find solutions to a community need—be it reduced greenhouse gas emissions, decreased energy costs, or increased energy independence.

Earlier this year, Larry Bean spoke as a panelist for the 2018 Island Energy Conference in Portland, Maine, to share the La Pointe municipal solar energy project as a model.  It is a model inspired by Larry’s long history with energy generation but also by his esteem of Maine’s two micro-gridded islands—Monhegan and Matinicus—which are also implementing solar projects to complement their diesel generation systems.

There are no easy answers to energy challenges, but it became apparent around the table that there is no shortage of innovative ideas and projects. Everyone who attended the energy-focused breakout that day came away with some new ideas—even the experts. The Island Institute will continue to connect the innovative ideas being developed on the Great Lakes islands with those being developed on Maine islands—because the more we can inspire and support each other by sharing ideas, successes, and even failures across geographic boundaries, the more resilient we all become. 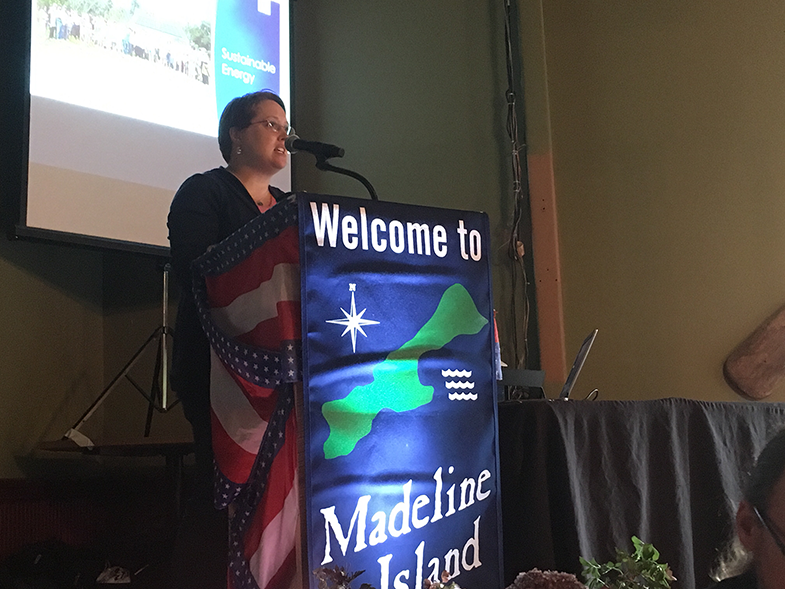