Dr. Ross Greene, internationally recognized child psychologist and bestselling author, spoke to a packed house of nearly 300 educators, parents, and adults in early April. The audience at this event was a passionate and grateful group, most of whom know and practice Dr. Greene’s Collaborative Problem Solving (CPS) model with their students or with their own children. They know that CPS is empirically-supported and evidence-based, they know that it works, and they want others to know about it too. A recurring theme during the Q&A part of the evening was how to get more adults – at school, at home, and in our community institutions – to understand and embrace the CPS model. This was my first time seeing Dr. Greene speak, and although I have attend countless conferences and speaking events, I have rarely seen such an attentive and engaged audience.

Lives in the Balance, Dr. Greene’s organization, and the Island Institute collaborated on this event which, as part of Dr. Greene’s presentation, included a first-time public viewing of the extended film trailer for the documentary titled, The Kids We Lose, which is currently in production with Lives in the Balance and Lone Wolf Media. The film trailer was hard to watch at times, because it starkly shows the ineffective and even inhumane ways that children with behavioral challenges are sometimes treated at schools and institutions. I did not know that students are still being paddled in American schools – in fact, there are 180,000 paddlings a year. Or that 267,000 students are restrained or secluded each year, 100,000 students are expelled from school annually, and 3,000,000 are suspended. These numbers are horrifying, and yet, almost every educator in the room including myself has had direct experience with the difficult and sometimes dangerous student behaviors and the subsequent ineffective and often harmful responses that so many schools resort to.

Through storytelling and sharing data, Dr. Greene took us along on his transformation from a traditional behavior management way of handling difficult behavior in children to his (and thousands of his followers’) approach now, which is based on the understanding that “kids do well if they can.”  Simply put, children with challenging behaviors lack the skills needed to not be challenging. He described an incident, many years ago, that was the last time he ever restrained a child. And he told us how he came to understand that rather than being punitive, the role of adults should be to help identify the lagging skills or unsolved problems of children and solve them – collaboratively and proactively.

Sue Dempster, the Pre-K teacher from Vinalhaven attended the event and wrote this about it in her newsletter to parents: ‘Dr. Greene stated that children with behavior challenges “look bad when expectations outstrip skills.” In fact, we all look bad when expectations outstrip our skills! No one wants to look bad and act out, but when children are “delayed in the development of crucial cognitive skills, such as flexibility, frustration tolerance and problem solving” they will act out – either with concerning behaviors (temper tantrums) or more subtle behaviors (whining, sulking, crying or withdrawal). Our job, as the caring adults in their lives, is to help them figure out what the problem is and then work collaboratively with them to help solve it.’

In addition to sharing his philosophy, experiences, and the film trailer with us, Dr. Greene also told us about two new areas of his work. i-Mark (Invest in Maine’s At-Risk Kids) is a one million dollar investment from the state of Maine that aims to identify our most at-risk kids and prevent adverse outcomes (including preventing incarceration) by deploying several proven strategies, including careful tracking of students and seamless collaboration and communication among caregivers. Compassionate Communities is a voluntary commitment that classroom teachers and schools can make stating that they subscribe to certain values in their interactions with kids. A focus group that includes several island educators has been established to help inform a curriculum for Compassionate Communities that is currently in development. Check out the Lives in the Balance website where you’ll find more information on both these projects as well as a tremendous amount of practical print and video resources readily available and free.

Dr. Greene’s work is transformational, and the schools that have embraced CPS and use his resources have seen marked improvement in student behavior and learning. His wry and even humorous delivery of this critically important, and often very serious content, made his presentation incredibly informative and memorable. His message resonates – not just with those in the room on April 10, but with thousands of children, educators, and parents – in Maine, across the country, and around the world. 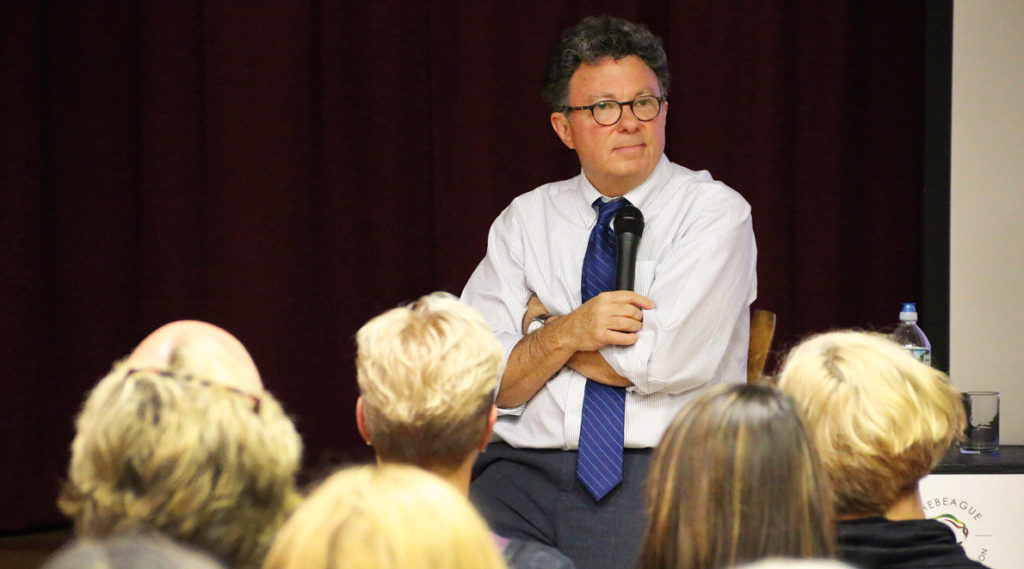