On April 17th, the Maine State Ferry Service released a new fare schedule for service to the six island communities they serve. The new fare schedule is the first fare increase since 2009 and comes after the state ferry service backed away from a proposal to give Maine residents a discounted rate compared to non-Maine residents. In a series of three public hearings, as well as in written comments and in conversations with the Maine State Ferry Service Advisory Board, there was little to no support from those who use the ferries for distinguishing between residents and non-residents.

Instead of charging fares based on the residency of the rider, the new fares create one rate for ferry riders, regardless of where they are going. The new fares also end the practice started in the 1990s of being able to purchase discounted tickets at island ticket offices. Different communities will feel the impact of the fare changes in different ways – but anybody who purchases tickets on the mainland to travel to these communities will see a substantial decrease in the fares.

Vinalhaven, North Haven, and Swan’s Island will all see a small rate increase that amounts to an additional $3 for passengers and $5 for standard vehicles from the tickets that are available to purchase on island. Frenchboro and Matinicus, two islands without daily service or ferry service offices on them, will see a substantial decrease in fares.

Unfortunately, Islesboro will see a substantial fare increase. Adult passenger tickets purchased on the island will jump from $5 to $11. Of greater concern to the community is the jump in passenger vehicle fares, which will go from $13.25 to $30. Islesboro is only a 20-minute ride from Lincolnville Beach, and as such, a fair number of people go back and forth on a regular basis.

On Thursday April 19th, Islesboro residents organized a gathering to highlight the concerns the community has with the new fares. From young babies napping on their mothers’ chests to residents of the elder care facility on the island, about 60 people showed up and represented a good cross section of the year-round community. Gabe Pendleton, a member of the island’s Select Board, Paul Hatch, a local contractor, and others were interviewed by local news stations and expressed their concerns about the impacts the fare increase will have on the community.

Although Islesboro may be associated with expensive homes or celebrity visitors, the residents themselves aren’t particularly wealthy. According to the Island Institute’s 2017 Waypoints publication, the 650 people who live on the island year-round have an average income of $53,250. This places Islesboro just under the average income for the country and slightly more than the average for both Maine and coastal communities. The average income on Islesboro is less than 55% of the annual income in Cumberland, Falmouth, and Cape Elizabeth. For a sense of the other communities who have a similar average income (+/- $2,500), Islesboro is just a little bit higher than Nobleboro and Orland and in line with Surry, East Machias, and Trenton. Communities like Newcastle, Brunswick, Bristol, Sorrento, and Whiting have annual incomes that are just a little bit higher than Islesboro.

An Islesboro resident holds a sign at Thursday’s gathering.

The steep fare increase for Islesboro residents has the power to change the character of the community by making it too expensive for families to continue living on the island. Families with two kids are looking at spending over $60 each time they need to go to the mainland – whether to get groceries, stop at the bank, or visit the doctors. Gabe Pendleton fears that the young families on the island are going to feel the biggest impact.

The current fare for two adults, two children, and a vehicle is $28, but under the proposed fare, it would be $63 – or $35 more each trip. This difference adds up quickly, and he estimates that the fare increase is going to cost a family of four an additional $2,500 each year (one trip each week and two additional trips a month).

“A lot of people just can’t afford that,” said Pendleton. “Families will have to dramatically change their behavior or, more likely, move off island. I have heard from many families since this came out, and people have said ‘I can’t do this.’ What do you do if you are on the edge anyway?”

Islesboro residents express concern over how the new fares will impact families and the elderly on the island.

The idea that this change will cause families to move ashore is troublesome, because Islesboro, like many island communities, sees young families as very important to their future sustainability. Up to this point, the island has capitalized on its proximity to the mainland to attract young families.

“We have done a lot of work to start a preschool out here, so people can continue to work before their kids are in elementary school,” explained Pendleton, noting that the community has come together to attract and retain young families by developing a magnet high school, starting a preschool, building fiber for home broadband networks, and constructing an affordable housing unit on the island.

Given the impact this increase will have on families, Gabe’s fear is that this will ultimately lead to major changes in the structure of Islesboro’s community.

“If those families start leaving, you start having a trickle-down effect,” he stated. “The preschool shuts down, the people who work at the preschool leave, there are less people buying things in the store. It becomes really hard to see the viability of the island going forward five to ten years, and what does the island turn into but a summer community?”  – Gabe Pendleton, Islesboro Selectman and resident

The impact of the new fares is not limited to just families. Paul Hatch is the owner of Paul Hatch Construction. He has been in the construction business his entire life. The new ferry rates are going to have a significant impact on his business. His dump trucks are regular users of the ferry, hauling gravel and other material out to the island for building and landscaping. He employees a couple of people full time. For trucks, he is going to see his fares increase from $1.75 per foot to $2.50 per foot. This is less of an increase than what the Maine State Ferry Service originally proposed. An increase of $0.75 per foot doesn’t sound like a lot, but Hatch estimates that it will end up costing him tens of thousands of dollars each year.

He explained that it will be tough to pass the increased costs on to his customers, noting that “the price of gravel is just going to be astronomical.” He sees a reduction in demand due to higher prices, and that will lead to the loss of business. He worries that he, or some of his competitors, will likely go out of business.

Local businessman Paul Hatch being interviewed about the impacts of the fare increase on his construction business.

Island residents aren’t the only ones concerned about the fare increase. One attendee explained that he lives on the mainland but does some landscaping on the island. He noted that, in the peak season, the first two boats to the island are always busy and bring a lot of people to the community to work.

Gabe said that the select board is currently examining their options, but they have had some difficulty getting financial or budget related information from the Maine Department of Transportation that would help them evaluate potential alternatives or provide helpful suggestions for addressing the very real concerns from the community.

Some other facts about Islesboro

This is a developing story and will be updated. 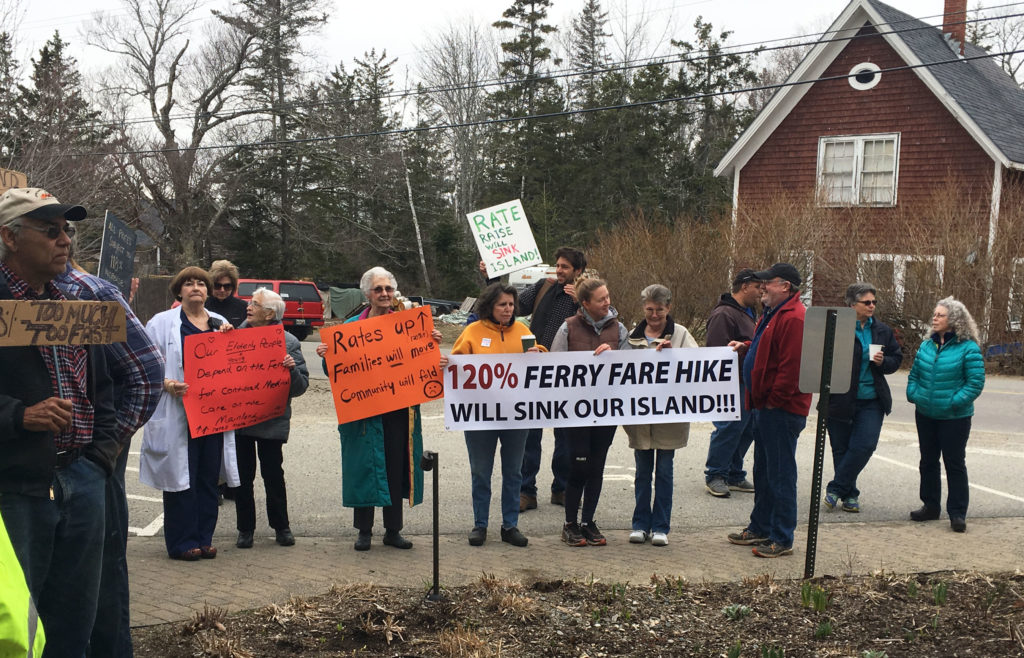 Islesboro residents gathered at the island's community center on April 19th to highlight the concerns the community has with the new Maine State Ferry Service fares.