CRANBERRY ISLES – After a multi-year process to bring broadband access to three of its islands, the Town of Cranberry Isles is now seeing the results of its recent $1.2 million investment in broadband infrastructure to connect the community with internet speeds that exceed 100/100 mpbs (download/upload megabits per second speeds).

“The Cranberry Isles will now have the same quality internet as New York City. That’s the kind of internet we’re talking about; that’s how to move communities forward,” said Mark Ouellette, COO of Axiom Technologies, a partner in the broadband project.

In February, the first resident on the Downeast island of Little Cranberry Island (Islesford) was connected with broadband. Today, Islesford is 100 percent connected through its new fiber-wireless network, allowing any resident that signs up for the service to access internet speeds on par with major metropolitan cities. Phase One of the project to connect Islesford is now complete, and the second phase will connect Sutton and Great Cranberry Islands by the end of the summer.

A COMMUNITY-DRIVEN SOLUTION – NOT JUST FOR ISLANDS

For the past few years, island and coastal community members all along Maine’s coastline have been sharing stories of struggling with inadequate internet service. Lacking reliable and fast internet access, many of these islands have identified access to broadband as an essential tool for encouraging economic growth and attracting year-round residents.

In rural and coastal communities that have invested in broadband, studies1 have shown that common themes have emerged. In healthcare, high-speed access allows hospitals and medical facilities to support online portals for patient information, e-visits, remote care (telehealth), and helps recruit doctors and families to the area. In education, schools are able to provide online classes that allow flexibility, customization, and access from home, as well as the ability to remotely help kids with homework. Economically, benefits include an increase in housing prices and sales, higher median incomes, the ability to attract new businesses and residents, and higher revenue from tourism since high-speed connections inspire visitors to stay longer.

The Island Institute is currently supporting 38 communities to help bring better broadband to the coast of Maine through a community-based model that includes feasibility studies, island broadband working groups, negotiations with providers, and conferences.

“Closing the digital divide by connecting all of Maine with broadband infrastructure is one of the few economic development challenges facing Maine that we both know how to, and can actually, solve in the next ten years,” said Stephenie MacLagan of the Island Institute.
“Success means ensuring that Maine communities have internet speeds at or above the national average by 2025.”

THE FUTURE OF BROADBAND IN MAINE

Reliable broadband is essential for economic stability and growth. Internet speeds in most of Maine are too slow to conduct business. To focus solely on connecting the “unserved” regions distracts from the very real challenges of communities that have insufficient internet access instead of reliable broadband. In some cases, even the most basic activities such as running credit card machines or uploading product pictures to a website is impossible.

Public money regularly subsidizes businesses that are installing technology that was out
of date at the turn of the last century. Programs that help connect people and communities to broadband infrastructure at a minimum need to be effective at tackling today’s challenges.

A better use of public funds would be to make investments in technologies and infrastructure that will provide service well into the future with minimal upgrade costs. These funds should support public/private partnerships that invest in infrastructure with the capacity for increasing speeds by requiring only software upgrades or relatively inexpensive electronics, hence minimizing the long-term costs of these networks and allowing the infrastructure to serve communities for 35 to 50 years.

“The next two to three years is the critical timeframe for Maine to make significant investments in broadband infrastructure,” said Nick Battista, policy officer at the Island Institute. “Communities are working with businesses to take the lead on making investments in their future, and government programs need to be supporting these efforts not hindering them. Maine gives seventh graders laptops or iPads, not typewriters. Maine communities need broadband to keep up.”

THE CRANBERRIES AS A MODEL FOR THE STATE

The Cranberry Islands should be seen as a model for communities looking to sustain themselves for the future, and broadband as an essential step in this process.

When the Town of Cranberry Isles Broadband Communications Working Group first began to gather information about bringing broadband access to the islands, residents lamented how lack of access contributed to the inability to sustain their lives on the islands, whether in regard to jobs, education, health, or community service. As one year-round Islesford resident noted in the working group’s community survey, “I had to stop work, my telecommuting job, because my internet speed was too slow.”

Internet on the Cranberries was slow; slow enough to make basic business functions difficult. With the national average internet speed in 2014 being 30/10mbps, many residents felt their future viability was contingent on improving their internet connectivity. “How do we keep a population without access to something that has become so essential?” questioned another Islesford resident.

On Great Cranberry Island, the community recently reopened their school in 2016 to help attract new families to the area. However, the homework gap created by lack of reliable internet access has created ongoing challenges for the school and its students. As one student living on Great Cranberry reflected, “I can’t access the Google Docs homework system from home because it uses too much data, so I go to the library, but it isn’t open at night.”

These sentiments were echoed by many and captured in the working group’s report for a town meeting last spring. At that meeting, the Town overwhelmingly approved, with a vote of 54 to 2, to fund up to $1.2 million for a high-speed fiber-wireless network to bring broadband to three of its islands. Based on per-premise costs of similar networks, and the high cost of telecommunication services customers currently bear, it is very likely that most property owners will actually save money as a result of this project, despite any increase in taxes.

Throughout the process to connect its communities, the Cranberry Isles broadband working group researched a number of technology options and chose to partner with Axiom Technologies, which is contributing about 15 percent of the total cost of construction. Once a broadband solution was identified, the working group also investigated funding from a variety of sources and received $10,000 from the Island Institute for consulting services on the infrastructure design and financial model, as well as a $70,000 grant from the ConnectME Authority to help with the infrastructure build out.

The installation work on the Cranberry Isles isn’t quite over yet. Learning about the possibilities that fiber-to-the-premise speeds could bring residents, the Sutton Island community is now striving to bring the same level of service to their island. Originally, a wireless broadcast of the internet service was expected on this island, to avoid the construction of a fiber network.
While the speeds of the newly designed project would now be above the national average,
the construction could cost $150,000 more. This additional cost will be up for a Town vote
this month.

Access to broadband is just part of the equation for improving internet connectivity – affordability and adoption are other aspects to consider. The working group continues to support Axiom’s service packages and other programs that make internet service affordable. This spring and summer, Axiom’s nonprofit arm will also conduct workshop opportunities to improve digital literacy. These workshops will instruct residents on how they can benefit from the improved internet speeds – from social enrichment like video calling family or coworkers to business efficiencies like building a website and bringing lobster business bookkeeping online. 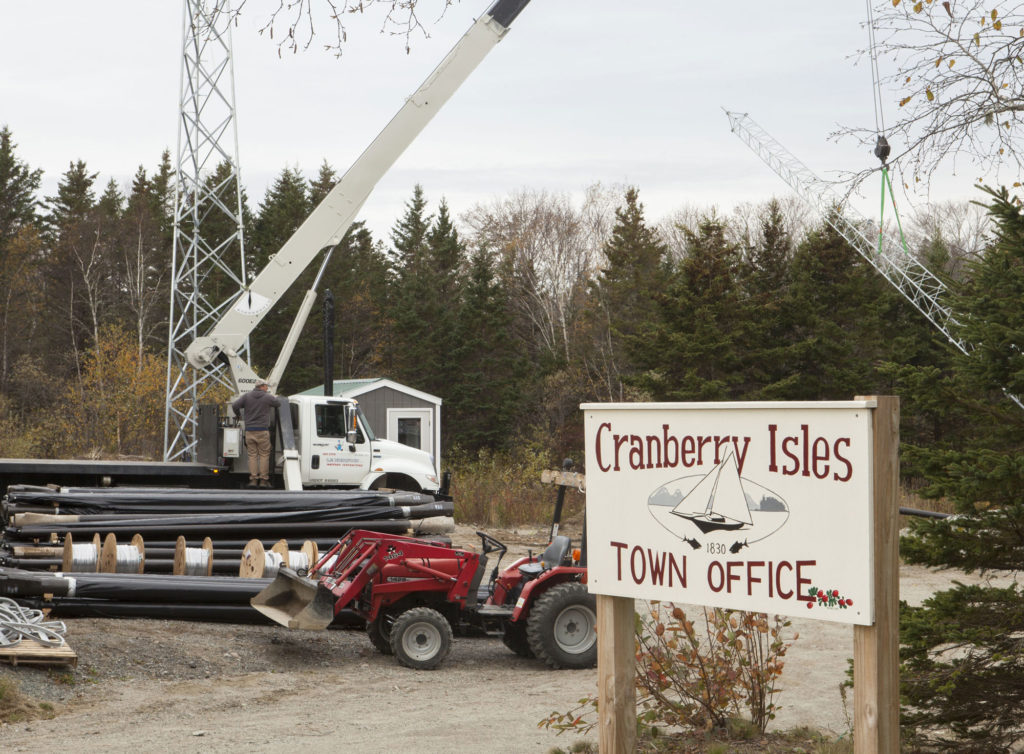