The Island Institute is now accepting applications for its 2018 Aquaculture Business Development program. In its third year, the program helps fishermen gain the tools they need to diversify and launch their small-scale aquaculture businesses.

The nonprofit wants to work with coastal and island residents who are highly motivated to start their shellfish or seaweed aquaculture businesses within the next two years. Applications are being accepted through March 23.

Aquaculture is a natural business expansion for those already working on the water. Lobstering and other marine trades already involve operating a business. In addition, starting a complementary business can absorb the impacts of potential changes in the lobster industry. Economists, scientists and industry experts predict that Maine’s growth potential in aquaculture is enormous, according to a Feb. 22 press release from the institute. In 2016, the Gulf of Maine Research Institute found that the Maine oyster industry would triple in size, and the mussel industry would grow six-fold, between 2015 and 2030.

“I have three boys, and I’ll be able to show them that another fishery is possible other than lobstering. Aquaculture will be something really important to the future of Maine’s coastal community,” said Jeff Putnam, a fisherman and former ABD participant now growing oysters with his family.

Through the ABD program, participants will gain the following:

The ABD program provides a focus on business planning, prolonged one-on-one support services, and networking to help cohort members get in the water. This year’s cohort will kick off with all-group and individual meetings in April, followed by a two- to three-day aquaculture boot camp where they will receive hands-on training at sea farms in early May. Throughout the summer, participants will receive one-on-one assistance from Island Institute staff as they start their businesses, and the year will round out with several more in-person meetings in the late fall and winter in order to cover the topics listed above.

In its first two years, the ABD program has supported a total of 45 individuals, with 15 participants starting new oyster farms, 13 growing seaweed and two starting a mussel farm. The Island Institute estimates that the farms begun through this program will have an economic impact of more than $44 million on Maine’s economy by 2025. 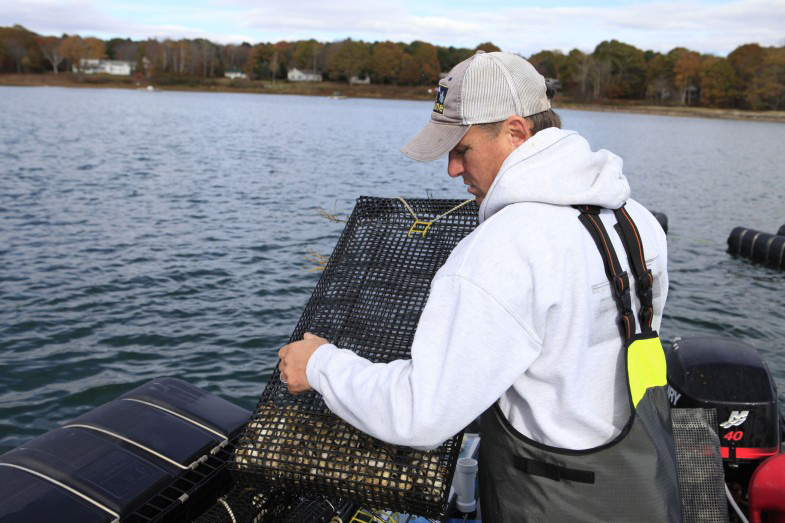 Chebeague fisherman and former ABD participant Jeff Putnam works on oyster cages. After going through the program in 2016