Edible seaweed is nothing new. Along Ireland’s rocky coast, seaweed has been harvested for food for centuries, even, legend has it, brought along as a provision by St. Brendan on his fifth-century voyage to find paradise.

It’s a staple of Asian food and no sushi bar is without it.

But Maine edible seaweed? Definitely not the stuff of legends, or even of most dinner tables.

The Island Institute in Rockland is hoping to change that, foreseeing a future where edible seaweed is not only a Maine brand but also a sustainable addition to the economy island and coastal communities that depend so heavily on fishing and lobstering.

On Friday the Island Institute will release a study that shows the possibilities for Maine’s edible seaweed industry — from processing to packaging and selling locally.

“There’s the potential for Maine to be the leader” in processing and selling edible seaweed, Briana Warner, Island Institute’s economic development director, told Mainebiz on Tuesday.

The growth of the state’s edible seaweed industry would not only put more local food into the marketplace, it also would give needed diversification for the state’s fishing and lobster industries.

So far, 48 people have taken part in the institute’s training program, which also focuses on oyster- and mussel-growing. The training, which is in its second year, is more of a business support program than actual training, Warner said, explaining that it connects those who want to become seafood growers with the technical resources and information they need.

Warner said those who have participated in the institute’s program are new to seaweed growing, but familiar with working on the water.

Seaweed is perfect for those who already harvest the ocean: it’s a cold-weather crop and is not labor-intensive.

“They understand the water so well, and the technical side is fairly easy to learn,” Warner said, adding that it also doesn’t require a huge investment in capital to get started.

Of course, a product needs a consumer, or it’s not a product.

According to the institute, “Despite potential growth opportunities, the domestic market for edible seaweed and seaweed products remains underdeveloped, with minimal focus on value-added products.”

That’s where the study comes in. The institute commissioned the study to determine the market for edible seaweed and how it will work.

The event, to be held at the University of Southern Maine, is for industry leaders, entrepreneurs and potential seaweed processors, who will hear about “new and innovative ways to process, package and sell edible seaweed products,” a news release about the event says. Speakers will include Sebastian Belle, of the Maine Aquaculture Association and Des Fitzgerald of the Maine Venture Fund.

There will even be recipes.

For instance, pork and beans with sugar kelp. “It actually softens the beans faster, and adds a lot of flavor,” Warner said.

Or French onion soup, with sugar kelp instead of onion. “It tastes a lot like French onion soup, but is packed with vitamins,” she said, noting that the kelp is flavorful and a little salty and once cooked has a crunchy noodle texture.

The institute worked with a chef to come up with recipes that are familiar to people, as well as make the best use of other Maine products.

The plant is also nutritious. Low in calories and considered a superfood, it’s loaded with antioxidants and nutrients, with one of the most essential being iodine, an essential mineral that many people don’t get enough of in their diets.

Warner said most of the seaweed sold commercially in the U.S. comes from Asia, harvested from water less clean than Maine’s, and is dyed or processed in other ways.

One of the reasons the product is custom-made for Maine is the clean, cold northern Atlantic water, which adds flavor and value, Warner said.

The seaweed also complements other locally produced seafoods and vegetables.

The University of Maine’s seaweed guide says that while many of the 250 types of seaweed are edible, only 11 are commercially harvested. It lists eight companies that harvest or market locally grown seaweed in the state.

Warner said there is anecdotal proof that edible seaweed is a desired product.

“It would be a great brand for our seafood industry,” she said. “Nobody else in the country is really doing it.” 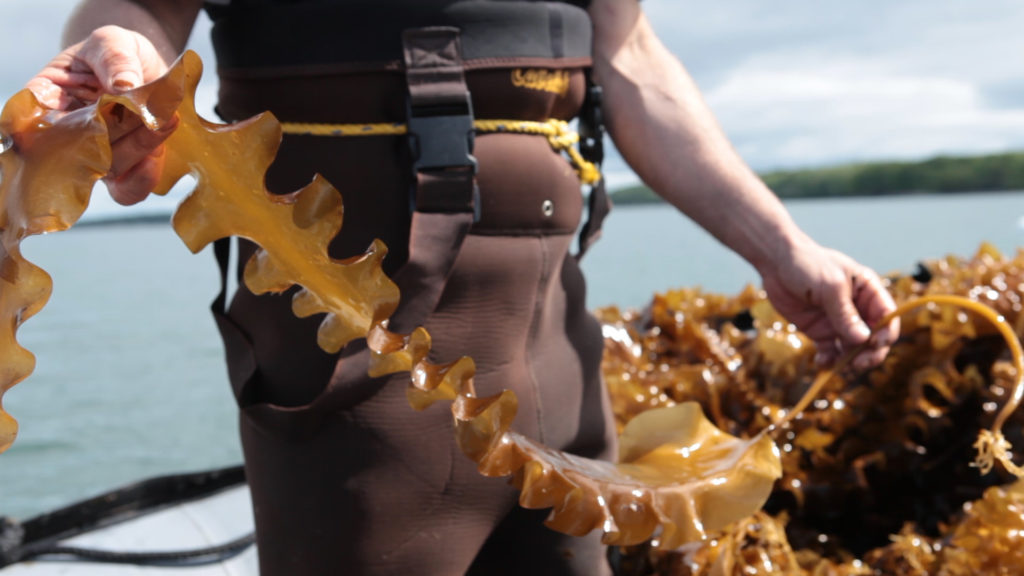 The Island Institute in Rockland will release a study Friday that shows the possibilities for Maine's edible seaweed industry — from processing to packaging and selling locally.