Earlier this spring, I got a chance to catch up with Brendan Parsons, the founder of BP’s Shuck Shack and overall oyster entrepreneur. We first got to know Brendan while helping him start his own oyster farm in the Damariscotta River through the first round of our Aquaculture Business Development program in 2015. We knew Brendan was going places in the oyster world, and less than a year after getting his first seed in the water, he has started a wholesale business, Damariscotta River Distribution. And he is not stopping there! Read below as Brendan fills us in on his upcoming plans.

Growing up here in the Great Salt Bay, I was exposed to oysters from a young age. Whether it is walking past the shell middens in Newcastle, going to the Pemaquid Oyster Festival, or seeing the farms out on the water, oysters are central to this region. In high school, I spent one summer on a small oyster farm, and also worked with a company around here, Seacoast Catering, manning their raw bar.

How did that transition into starting your own business, the Shuck Shack?

After graduating from college, I went out west, did that ski bum thing, came back, and decided it was time to do something of my own. So, I started scheming. You know I’m always scheming! One winter night, I was talking with one of my friends about food carts, and she said, “you know what would be great idea for a food cart? A raw bar!”

Thinking about it further, we realized it makes a lot of sense. It’s one thing, it’s simple, and it doesn’t take up a lot of space. You just have to make sure everything is cold, and have good condiments. So, with a little more thought, I started BP’s Shuck Shack in 2015. June 20th was the official first day out in the streets.

Where has the oyster business taken you since then?

The Shuck Shack business has been great, and we’ve since expanded to two carts in Portland. We do a lot of catering at events through the business. One of the greatest relationships I built was with the microbreweries in town, as I catered for companies such as Bissel Brothers, Foundation, Austin Street, and Allagash. That was super important and pivotal in the development of the business, and there’s just a great culture there, too.

About a year ago, I started growing oysters right here in the Damariscotta River. It’s been a dream of mine for a while now. I love being out on the water, and I’m excited to shuck my own oysters soon!

At the same time I was doing this, I had also hired an employee for the second Shuck Shack, and was losing a lot of time driving back and forth from Damariscotta to Portland to supply oysters for our two carts. I realized I needed a larger distribution operation to make these trips worth it, so I decided to open Damariscotta River Distribution.

I started looking for spaces to run this new business, and at first I didn’t even think of this place (referring to his new location in downtown Newcastle, just across the Damariscotta bridge). I don’t know how many times I’ve driven by it, and just thought “that would be perfect for a restaurant, a brewery, a Mexican restaurant, or a barbecue spot,” but for some reason I had never thought of it as a place for oysters.

But something finally clicked, and I realized that it would be the perfect space, not just for distribution, but for an oyster retail store, as well as a raw bar. I found out who owned it, contacted him, told him what I was trying to do, and he was really on board with it. We structured out a lease agreement, and lo and behold, here I am! I started in January, and now the wholesale space is up and running. We are working to get the retail and raw bar sides ready to open this summer.

On what keeps him motivated:

My mission statement is building oyster education. I want people to know how these oysters are grown, how they interact with the environment, and what makes Maine ones taste so good. Just in the Damariscotta, the size and shape of oysters vary dramatically between growers. Factors such as salinity, which is high near the bay but lower near the lake, or growing technique (top, or tidal, or bottom culture), can all influence the oyster’s flavor profile.

I also want to shine a spotlight on the hard-working growers here in the Damariscotta River. When people come here, they think there are only one or two different growers, say, Pemaquid and Glidden. But in reality, you’ve got Mook, you’ve got Norumbega, you have John’s River, you have Otter Cove, you have Muscongus Bay, and there are a couple of other new guys popping up too. And you’ve got the wild oysters as well! One thing I plan on doing is having pictures of each farmer in the raw bar room, and maps of where they’re growing to really give a name and a face to each oyster.

On his involvement with the Island Institute’s Aquaculture Business Development program:

The Island Institute really did provide a special environment for us to learn about aquaculture. You guys did a great job pulling together a capable and motivated cohort of prospective growers, and you put in the time and the research to give us all the information we needed to start a career in aquaculture and strengthen the local community.

One of the best things that the program gave me is that it allowed me to meet a lot of young, up-and-coming growers that I’ve kept in contact with. The relationships I built there have allowed me to know growers from other rivers, like the New Meadows, Casco Bay, or even Downeast towards the Stonington area, and Pen Bay. The business is called Damariscotta distribution, but with that said, I’m not going to buy and sell oysters just from the Damariscotta, and I really hope to continue working with this group to get their names out there.

You are now a grower, a distributor, and a chef. Which parts do you like best?

I wouldn’t call myself a chef! But I love waking up early in the morning and going out on the water. I think that’s a great way to start your day. I also love being in Portland, with the food carts, and having people tell me, “Oh, wow, that’s the best oyster I’ve ever had!” It’s also really rewarding when I get that kind of reaction from someone who has never had an oyster before. During the summer, I usually get one of those a day.

Last question: do you have any plans for the future that you could share with us?

I heard about this cool new raw bar opening up at 68 Main Street in Newcastle! So, I’m excited for oysters and summer, and what the future holds.*

*Update to story: Brendan’s raw bar, River Bottom Raw Bar, held its grand opening celebration at 68 Main Street in Newcastle on August 19th. More information on the raw bar is available on its Facebook or Instagram pages. In addition, you can follow BP’s Shuck Shack on Facebook or Instagram to learn more about the mobile oyster cart and its location on Portland’s Waterfront or at local breweries and festivals around the state. 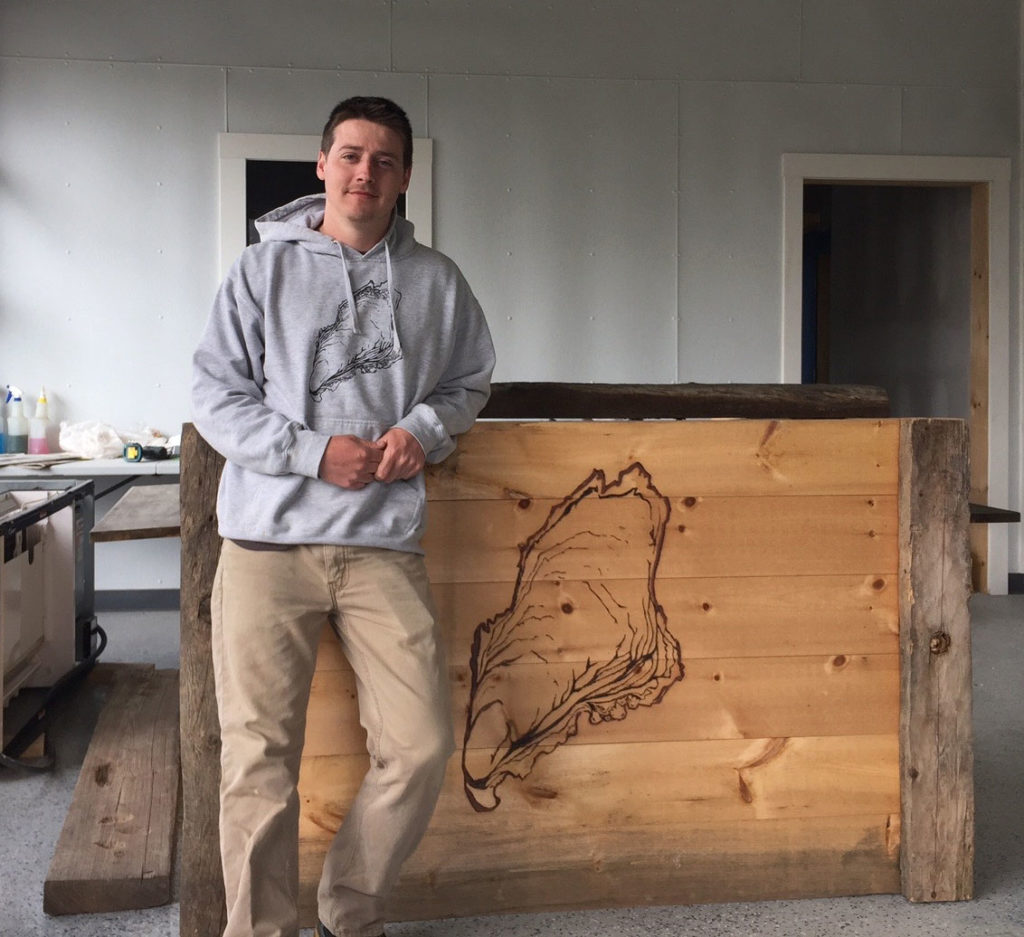