Maine is known around the world for the iconic lobster boats that dot the coast and are the primary vehicle for the state’s renowned fishing industry. Portland-based photographer Mark Fleming has developed a new perspective on these boats by using a drone to capture them in an innovative, yet classic fashion.

The Island Institute is celebrating Fleming’s extraordinary visual record of these working vessels by featuring his work on the covers of the new edition of the Island Journal, the Institute’s annual magazine. The covers not only offer striking images, but also a new look at the boats that are so economically, culturally and historically important to the coast of Maine.

Fleming grew up in the Waldo County town of Palermo, with a fascination for working harbors and lobster boats and a deep appreciation of the men and women who make their living on the sea. When he got his first drone, he took it to Friendship to fly it over some boats in the harbor.

While lobster is synonymous with Maine, Fleming notes that the people and processes that form this crucial industry are often overlooked. The piers, the boats, the men and women who make their living on the sea have always captured his attention and been among his favorite subjects. In the last year, using a drone, he started capturing local lobster boats from a low altitude, a perspective that allows viewers to see familiar things in an unexpected way. From the air, the unique traits of each boat are accentuated — the shape of the bow, the design of the stern, even the arrangement of the fishing gear.

“Fishermen take pride in their boats,” said Fleming. “Not only do they often put their life savings into these vessels, but they put their personalities into them as well. It’s these details that become really important when you isolate the boat.”

When he first got the drone in the air, he flew it very high. Then he lowered it to about 20 feet above the boat “and got this really unique image in real-time — one with the shape of the boat and all of the details inside.”

However, Fleming soon found out that consistently capturing these images is not easy. It requires just the right combination of cloud-filtered sunlight, tide and wind, and it’s rare to get all these prime conditions at the same time. On that first trip with the drone, it was a cloudy day at mid-to-high tide. He realized that under these specific conditions, the water looks black, making it the backdrop and not the focal point of the photo.

To date, Fleming says he has shot about 100 lobster boats and has refined that number to the 60 images that compose his evolving Gull’s Eye View series. Since most of these are from Penobscot Bay, he’d like to capture more boats further up and down the Maine coast and work with the fishermen in the various harbors to create a visual catalog of Maine’s lobstering culture.

“My ultimate goal is to represent as many harbors as possible, and capture active, licensed, lobster boats in the state, or other boats that have some connection to the lobster industry,” he said.

The Island Journal has long celebrated and featured iconic photography of Maine, having been launched in 1984 with a cover photograph by Island Institute co-founder Peter Ralston that recently was recognized by Down East magazine as the Most Iconic Maine Photo of All Time.

“Mark Fleming’s photography builds on Peter Ralston’s legacy of stunning images that capture the coast of Maine in ways we haven’t previously experienced,” said Tom Groening, Island Journal editor. “It creates visual storytelling so compelling that it requires no explanation.”

Images from Mark Fleming’s Gull’s Eye View series can be seen in the 2017 Island Journal, available for purchase at select bookstores in Maine; at the Island Institute’s store, Archipelago, in Rockland; or online at thearchipelago.net. In addition, large prints of selected photos will be available for purchase at Archipelago. To see more of Fleming’s work, visit markflemingphoto.com. 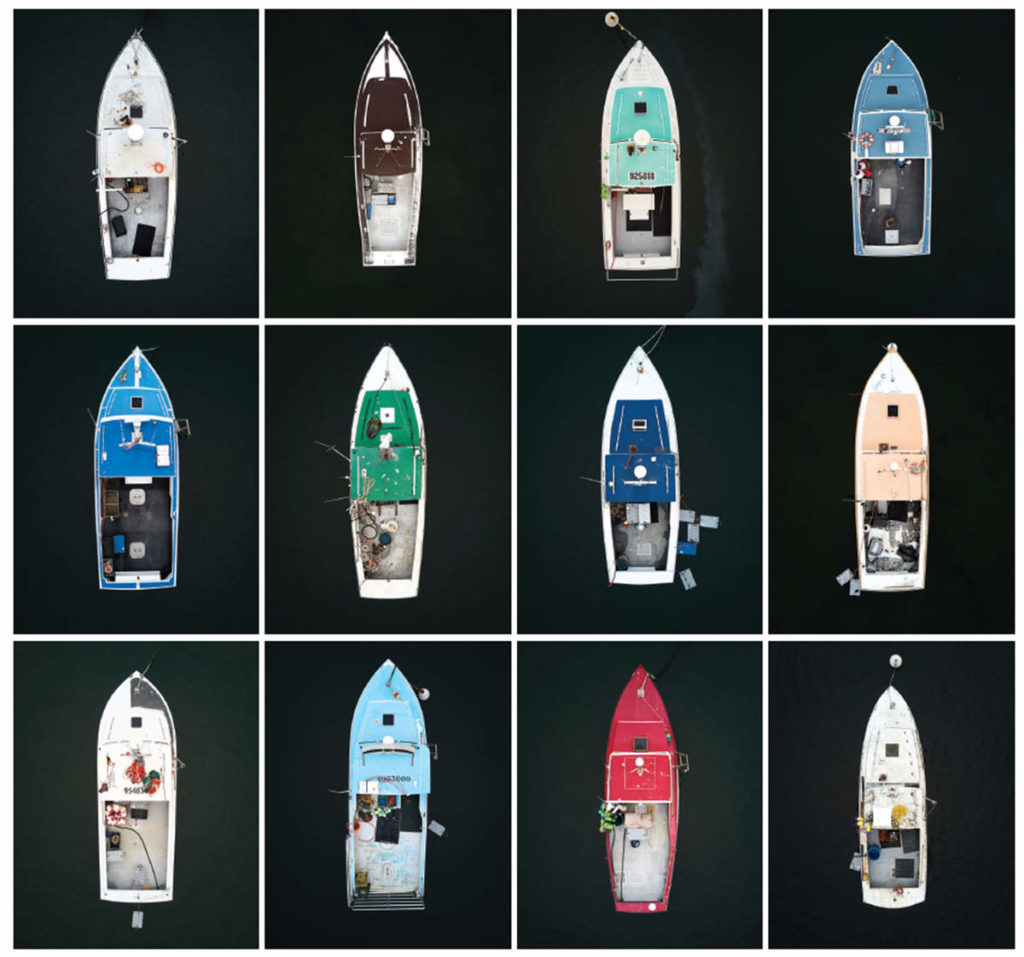 The back cover of the 2017 Island Journal