Maine is the most rural state in the nation and, also, one with some of the poorest internet access. Out on the coastal islands, internet service ranges from lousy to nonexistent.

Residents of the Cranberry Isles, from lobstermen to telecommuters, are banding together to pay for costly new infrastructure they hope will help preserve a threatened way of life.

“It’s incredibly slow and it’s weather dependent. So if there’s fog or rain or, you know, it’s dark out or whatever it doesn’t work as well,” says Samuel Donald, who manages a local boatyard.

Donald and store owner Barbara Stainton are mulling a municipal plan to radically upgrade internet service for the Cranberries, taking internet speeds from a rate that hovers around 1 megabit per second — glacial, feels like dial-up — to more useful rates as high as 100 mbps. The setup will include beaming data from a boatyard microwave antenna over to the island next door.

Samuel’s looking forward to speedier dispatch of tasks that are so much easier for mainland businesses — processing payments, posting boatyard videos, uploading marketing content. Fast and reliable internet access, he says, is as indispensable today as electric or phone service.

Machias-based internet company Axiom Technologies plans to get new internet service for Islesford online before this winter, with service to the rest of the Cranberries following next year.

So far residents of 33 Maine islands and remote coastal communities have joined an effort spearheaded by the Island Institute to get robust internet service to participants within ten years. 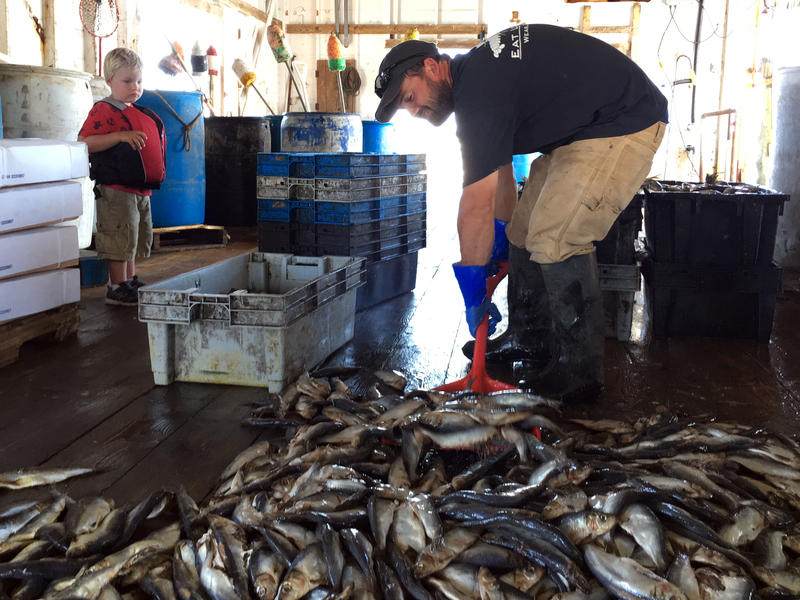 Eighth-generation Islesford lobsterman Nick Hadlock shovels herring as son Elliott looks on. The island will lose its abysmal internet services this year – to be replaced by a high-tech system islanders voted to back with a $1.2 million bond.