The scholarships, made possible by the Island Education Fund, totaled $55,300. Students from 12 of the 15 year-round, unbridged islands received awards, which are renewable for up to four years of post-secondary education. Of these students, eight island students received special named awards:

Imogen Moxhay (Smith College) of Peaks Island and Taylor Littlefield (University of New England) of Vinalhaven received renewal awards for the Louis W. Cabot Academic and Community Leadership Scholarship, given to a student who exemplifies academic excellence and who is recognized by peers, teachers and the community as personifying the true spirit of leadership in service to others.

Lance Bishop (Maine Maritime Academy) of Frenchboro received the renewal S. Parkman Shaw Scholarship, given to a college upperclassman who demonstrates not only successful academic growth and achievement during his or her college career, but also the capacity to overcome unique challenges and/or difficult circumstances.

The Island Institute also accepted 16 high school juniors (rising seniors who will graduate in 2018) into its newly launched Mentoring, Access, and Persistence Program. Based upon national research, MAP combines post-secondary scholarships with wraparound support services in an effort to support students to persist through post-secondary graduation.

In addition to scholarship support, students will have access to a summer leadership intensive, monthly webinars, a peer mentor and individualized support from Island Institute staff. MAP programming for the MAP18 Scholars kicked off in March with a training for students and their families and will continue in July with a three-day leadership intensive.

For more information on the MAP Program and other scholarship and transition support offered by the Island Institute, visit islandinstitute.org/program/community-development/scholarships. 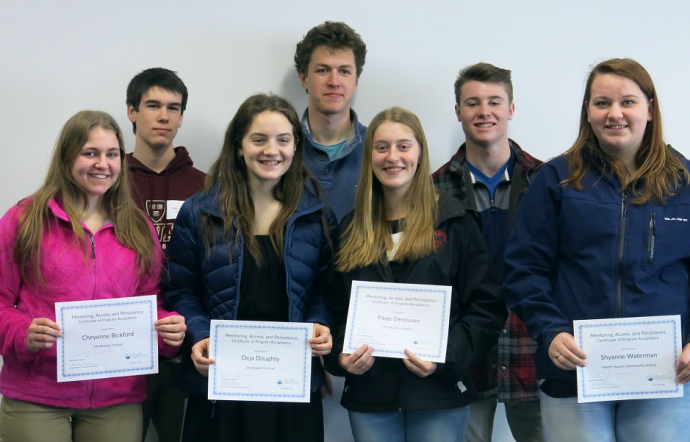 Some of the new MAP18 scholars at the MAP Induction and Training in March. Pictured L-R: Cheyenne Bickford