Rockland-based Island Institute kicked off its seventh annual Island Energy Conference in South Portland on April 28 by recognizing two groups for their work as energy leaders and champions for Maine’s island communities. The Island Energy Innovation Award was presented to the Monhegan Plantation Power District for recent upgrades made to the island’s power station which will create cleaner emissions and incorporate renewable energy into the island grid, and the board and staff of the Swan’s Island Electric Cooperative received the Island Institute Community Champion Award for their work in securing a pathway for affordable electric power for the people of Swan’s Island and Frenchboro.

The awards were presented by the Island Institute’s Community Energy Director Suzanne MacDonald, who explained that both groups worked hard to make sure local voices were a part of their processes and are a great example of how small communities can still have a big impact and play an important role in the larger conversation about sustainability everywhere.

“The recipients of this year’s awards have worked tirelessly to help their communities navigate difficult change,” said MacDonald. “In between hauling lobster traps and running a local inn, these island leaders have facilitated inclusive processes to create new energy landscapes for their communities and received the attention of others working on energy from around the U.S. and the world. The Island Institute is honored to support them in this critical work.”

In her welcome message, U.S. Senator Susan Collins echoed MacDonald’s remarks, stating that Maine island communities have made great strides in facing their energy challenges over the past decade and have established themselves as leaders when it comes to the need to transition to more sustainable, affordable energy use.

Keynote speaker Tetsunari Iida, executive director of Institute for Sustainable Energy Policies (ISEP), a nonprofit and independent research institute based in Japan, also talked about the importance of community-based renewable energy projects in both the local and global picture. A leading authority on renewable energy and advocate for community-led efforts as the Secretary-General of the Japan Community Power Association, Iida discussed how renewable energy and the improvement of energy efficiency in communities play a primary role in the sustainability of coastal and island communities in New England and around the world, and how the sharing of information and solutions creates an opportunity for us to learn from each other.

Community input and involvement were credited with playing a significant role in both the Monhegan and Swan’s Island projects.

“Years of hard work and conversation in this small community have brought us to where we are today,” said Marian Chioffi, who accepted the award on behalf of Monhegan Plantation Power District. “Community input is what moved us to find a way to produce power while decreasing our carbon footprint. Through the installation of diesel micro-turbine generators this past year, we have greatly reduced emissions, both exhaust and noise, from the plant, and by adding a solar array to the plant roof, we are now incorporating renewable energy into the mix as well. Overall, we feel very proud of what we have been able to accomplish for our community, and are grateful to the Island Institute for this recognition and their support throughout the process.”

Upon receiving the Community Champion Award for the Swan’s Island Electric Cooperative, President Ed Schwabe noted, “This award could only have come about through the hard work of many people and organizations over the past several years. Our thanks goes to Tim Schneider, the Maine Public Advocate, was the first proposed the idea of teaming up with a larger mainland utility, and to the Emera board for seriously considering the merger of our two utilities and then applying the elbow grease to make it a reality.”

Schwabe continued, “Throughout it all, the Island Institute has been a steadfast ally in helping us gauge the opinions of our residents on both islands and achieve the outcome that our communities desired.”

In its seventh year, the Island Institute’s Island Energy Conference is the region’s premier forum on community-based energy solutions, bringing together island leaders and energy experts from around the world and creating a forum for sharing ideas, exchanging information, and celebrating successes. The event attracted 150 people, hailing from three countries (U.S., Japan and Denmark) and six states (Maine, Alaska, Hawaii, Massachusetts, New Hampshire and Rhode Island), who learned about common energy challenges and the resources available to address them. 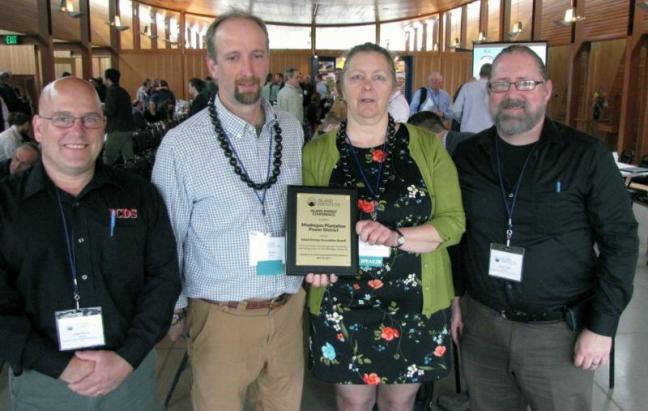