Reaction in Maine to President Donald Trump’s proposed $1.15 trillion budget has been swift – and critical.

Democrat Chellie Pingree, Maine’s 1st District representative who serves on the House Appropriations Committee, says the plan to slash many domestic programs to finance a significant increase in the military and make a down payment on construction of a U.S.-Mexico border wall is “foolish, shortsighted…and will make America less healthy, safe, and economically secure. “

And independent Sen. Angus King says he has a hard time seeing how eliminating heating assistance, cutting medical research, and ending economic development funding would do little more than harm people, families, and businesses across Maine.

President Trump’s budget also proposes to cut the State Department by nearly a third, which King says “only jeopardizes our security and makes us less safe from global threats – not more.”

Republican Sen. Susan Collins, a senior member of the Senate Appropriations Committee, says every president’s budget is revised by Congress and this one will be no exception. She says she’s encouraged that the budget tries to avoid indiscriminate, across-the-board spending cuts and the threat of sequestration for the military. At the same time, she finds serious problems with the budget proposal.

Environmental groups are also raising alarms about the budget. Lisa Pohlmann of the Natural Resources Council of Maine says it “declares war on clean air, clean water and public health” because it cuts funding to the Environmental Protection Agency by 31 percent, cuts 3,200 personnel and eliminates more than 50 programs. Kate Dempsey of the Nature Conservancy’s Maine chapter says when she looks at the president’s proposal, she sees the potential for Draconian impacts on natural resource users and anyone who values the outdoors in the state.

The National Oceanic and Atmospheric Administration is facing some $250 million in cuts. The single biggest cut would be made to a 50-year-old program designed to support the nation’s coastal communities, called Sea Grant.

“It was initiated back in the mid ’60s at a time when our nation recognized that our coasts were vulnerable to a lot of challenges and issues,” says University of Maine Sea Grant director Paul Anderson.

The program, not unlike the land-based Cooperative Extension, looks at a broad swath of issues, from fisheries and aquaculture development to ocean health and beach erosion. The complete elimination of Sea Grant funding from the president’s budget, he says, is hard to comprehend.

“The really important thing from our perspective is that you don’t throw the baby out with the bath water,” says Heather Deese with the Island Institute.

Deese says it’s understandable that the administration wants to save money, but she says important programs that contribute to the health of coastal areas should be left alone.

The sea grant funding is absolutely one of those critical funding programs,”
said Dr. Heather Deese, VP of research and strategy, Island Institute

The University of Maine was expecting to receive $1.2 million to fund the Sea Grant program. The allocation was also used to leverage money from the State of Maine and other funding sources.

It’s the first time since the Regan Administration that the Sea Grant funds, nationwide, have been completely zeroed out. 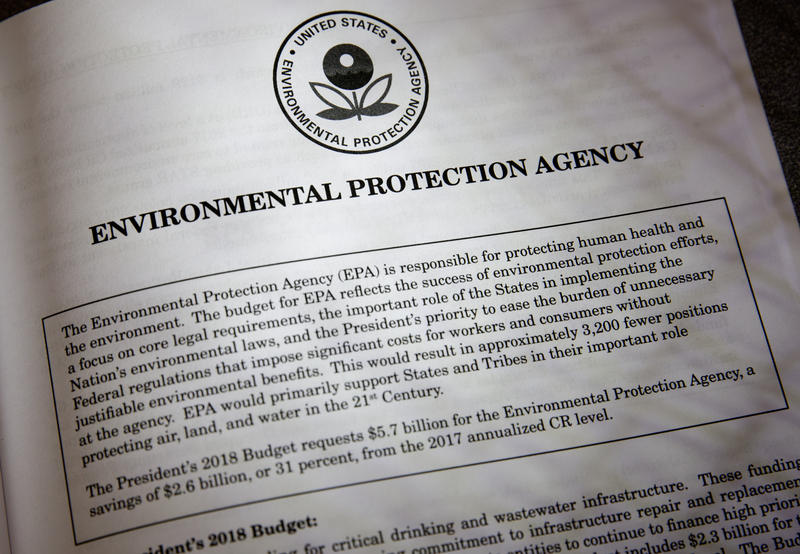 Proposals for the Environmental Protection Agency in President Donald Trump's first budget are displayed at the Government Printing Office in Washington on Thursday.