By Staff / The Free Press

The Island Institute, based in Rockland, just released the first edition of “Waypoints: Community Indicators for Maine’s Coast and Islands.” The publication presents economic, community and environmental indicators for Maine’s coastal and island communities as they compare to the rest of the state and the nation. Detailed data on each of the 120 island and coastal communities is available online in the supplementary data tables. “Waypoints” is available online at www.islandinstitute.org/waypoints.

Highlights of the findings include:

• Maine lobster landings are more than 3 times larger than they were 20 years ago, and are 8 times larger in Washington County (as lobster catches shift north and east), providing an estimated $1.5 billion economic impact for Maine.

• Maine is now much more dependent on a single species — as diversity of harvested seafood has declined by 70%. In 1995 landings of urchins, scallops, shrimp and groundfish added together to more than twice the amount of lobster landed that year. By 2015, fishermen landed more than 7 times as much lobster as all of those other species added together.

• The coast is further challenged by very low access to broadband service, where only 4% of the Downeast coast and 0% of islands have workable access speeds, compared to 62% of the U.S., which enjoys 10 mbps upload and download speeds.

• Given that sea levels are projected to rise up to 2 feet by 2050 in Portland, and up to 6.6 feet by 2100, and rapid ocean warming is projected to continue, broad economic impacts are likely for the Maine coast.

Dave Cousens, president of the Maine Lobstermen’s Association and an Island Institute board member, said the data shown in Waypoints describe the impacts that climate change has already had and how these factors threaten the future economy of Maine.

“In 40 years will we have a commercial lobster fishery in Maine? The temperature of the ocean is warming fast and has shifted all dependability,” said Cousens. “In Penobscot Bay, we are now in the sweet spot of water temperature where lobster thrives. We have the number one fishery in the U.S. now, but there is no lobster fishery south of Boston because the water is too warm. I’m concerned for my sons’ future in this industry and for the resilience of the Maine economy. This publication makes these challenges crystal clear.” 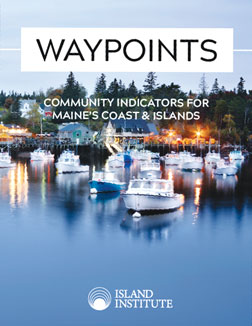