ROCKLAND, ME – The Island Institute released today the first edition of Waypoints: Community Indicators for Maine’s Coast and Islands. The publication presents economic, community and environmental indicators for Maine’s coastal and island communities as they compare to the rest of the state and the nation. It provides a resource for local community members, state and federal representatives, agency staff, and research partners whose work relates to and impacts coastal communities.

Highlights of the findings include the following:

The featured indicators in this infographic-rich publication include: population and age; income and self-employment; the economic impact of fisheries and aquaculture; coastal tourism; broadband accessibility; energy and home heating; housing availability and affordability; education; fisheries; environmental change; conserved land; sea level rise; and ocean warming. Detailed data on each of the 120 island and coastal communities is available online in the supplementary data tables.

“We produced this publication to put a new lens on the relationship between coastal and island communities. We hope it gives our partners a valuable way to start conversations about local challenges and opportunities, and serves as a resource for them in planning projects, attracting funding, and getting work done,” said Dr. Heather Deese, vice president of research and strategy at the Island Institute.

Data in this publication has been aggregated and analyzed by the research team at the Island Institute and articulated through maps and charts illustrating the unique qualities of Maine’s coastal and island communities. Examples show how the lobster fishery has shifted over time, and that Maine island residents experience some of the highest energy costs in the nation.

Dave Cousens, president of the Maine Lobster Association and an Island Institute board member, said the data shown in Waypoints describes the impacts that climate change has already had and how these factors threaten the future economy of Maine.

“In 40 years will we have a commercial lobster fishery in Maine? The temperature of the ocean is warming fast and has shifted all dependability,” said Cousens. “In Penobscot Bay, we are now in the sweet spot of water temperature where lobster thrives. We have the number one fishery in the U.S. now, but there is no lobster fishery south of Boston because the water is too warm. I’m concerned for my sons’ future in this industry and for the resilience of the Maine economy. This publication makes these challenges crystal clear.”

As the future of the Maine economy is shaped, the Island Institute aims to highlight the significance of the Maine coast through objective reliable information and has committed to tracking these data over time to show trends through 2025.

Author of The Lobster Coast, Colin Woodard commented, “Taking an historian’s perspective and looking at the important issues that Waypoints brings forth, we need to protect the legacy we have inherited in terms of landscape, resources and environment that will be increasingly rare, and thus increasingly valuable. We also need to build an economy that serves both those born here and those who move here to telecommute.”

The Waypoints publication is available online with supporting data at: www.islandinstitute.org/waypoints. 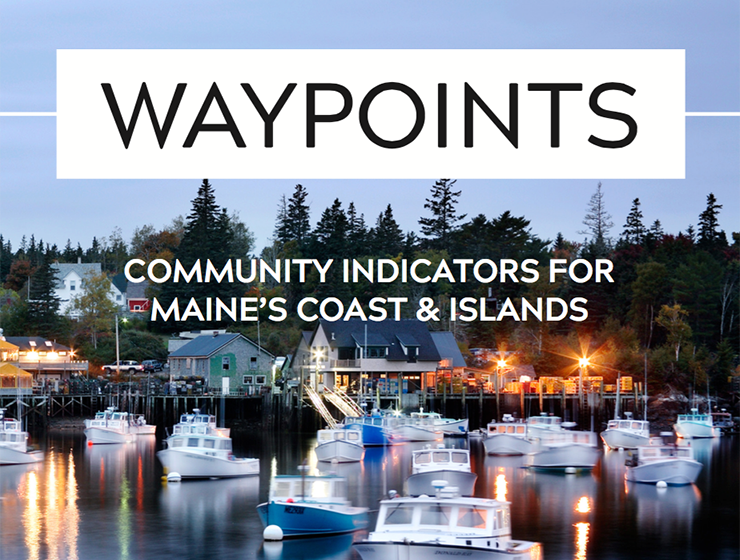