Kate Tagai is a community development associate at the Island Institute.

I went to Wisconsin to learn about island communities in the Great Lakes.  I didn’t expect to find so many reminders of Maine, but the connections sprang up in every conversation.

Madeline Island is the only inhabited island among the 22 Apostle Islands nestled at the southern end of Lake Superior.  The other 21 Apostle Islands make up the Apostle Island National Lakeshore, an area renown for historic lighthouses, sandstone caves and sweeping lakeshore vistas.  Though a freshwater lake is very different from the Atlantic Ocean, and they are separated by a large geographical distance, these rural coastal communities share quite a lot.

How Madeline Island reminds me of Islesboro: Geography

As I stepped off the Madeline Island Ferry, I turned around to gaze back at the mainland. The low rolling hills rising above the town of Bayfield bore such a resemblance to the Camden Hills as they rise above Lincolnville that I was transported to Maine for a moment. The ferry crossing from Bayfield to Madeline takes 20 minutes, just as the ferry crossing between Lincolnville beach and Gindel Point on Islesboro.

As our hosts drove us around the island, I was brought back to my first tour of Islesboro in the back of a school bus.  The roads stretching 14 miles down one side before looping back to come 14 miles back to town with glimpses of Lake Superior shining through the trees reminded me of the glimpses I got of the Atlantic Ocean through the conifers as we worked our way around Islesboro’s 14 mile length.

How Madeline Island reminds me of Isle au Haut: Parks

Madeline Island acts as the gateway to the Apostle Islands National Lakeshore forming a parallel in my mind to how Isle au Haut is both a part of, yet set apart from a much larger and widely known Acadia National Park.

We walked down to the sandy beach at Big Bay Town park, crossing a boardwalk over the lagoon they use for skating in the winter. As we explored, our hosts talked about the history, the recent infrastructure renovations, and the town commitment to their park.

Adjacent to the town park is a large state park which puts more than 2,000 acres into conserved land.  Together the parks attract tourists, provide recreation opportunities, and conserve the lakeshore from development, just as Acadia does on Isle au Haut, and there are similar considerations in both places about infrastructure maintenance and development, taxes, and the town budget that come into every conversation.

How Madeline Island reminds me of Monhegan: Energy

Madeline Island built a large, town run solar array to provide energy for the clinic and the library.  They have further plans add solar panels to support the town office and other municipal buildings. Though they have a cable that connects them to the mainland power grid, they have dreams of being as energy independent as possible.  I had heard all about microgrids and energy issues from our Island Fellow working with Maine’s two diesel powered islands- Monhegan and Matinicus so I felt I could follow along with the conversation.  But I wasn’t the only one who made the connection.  The chairman of the La Pointe Town energy committee pulled me aside the first chance he could to ask me everything I knew about how Monhegan approached their isolated energy system.

How Madeline Island reminds me of Peaks Island: Visitors.

During the 4th of July, more than 6000 people cross the lake to enjoy the festivities. This influx more than triples the summer population of 1500 and puts enormous stress on limited public infrastructure.  This year the town finally put in strategically placed and nicely landscaped port-a-potty’s to address the most urgent need. But there are huge impacts that come along with hosting that many people in one place, as Peak’s Island can attest.   During the last Maine Island’s Coalition meeting, the representative from Peak’s island talked about the pressures of having more summer visitors than existing infrastructure can handle.  Peak’s island welcomes as many as 1000 visitors a day through July and August, a more sustained influx than Madeline Island, but leading to strikingly similar conversations.

Both Eastport and Madeline had a thriving fishing economy which dwindled.  Both places have had to reinvent themselves in order to reinvigorate their economy, and both places have done it using art.  Eastport has the Tides Institute, the Eastport Arts Center, Passamaquoddy Bay Symphony orchestra, and many more small galleries and artisan shops. It is a place where when you walk down the street folks are as likely to ask you what art you practice as they are to ask about your job.  Madeline Island has the Madeline Island School of the Arts, the Woods Hall Craft Collective, the Madeline Island Chamber Music Camp and a handful of studios, galleries and artisan shops.  As we walked around we heard stories of the different art being practiced- from the more traditional chamber musicians and potters, to the sculptors and bohemian Tom’s Burned Down Café which is as much a modern art installation as it is a cafe. 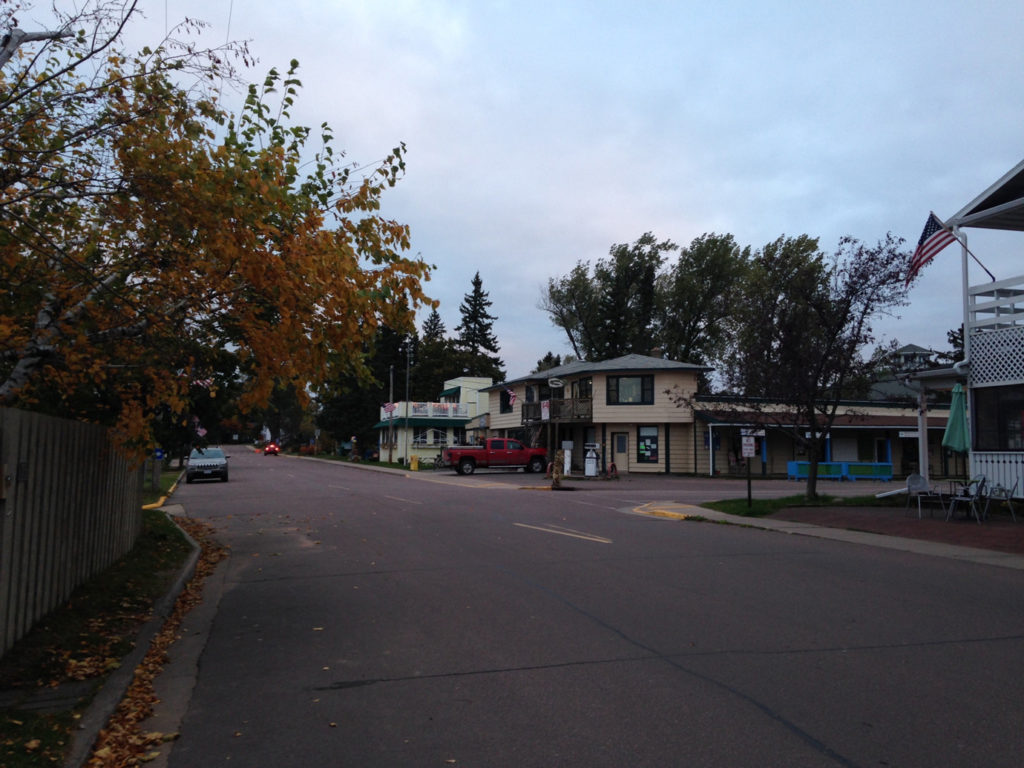