When I first got on the phone with Matt Luck, owner and founder of Pride of Bristol Bay, I asked him about his business model. Matt is first and foremost a commercial fisherman, and each summer he navigates his 32-foot gillnetter across Bristol Bay until he has a boat full of red salmon, which he puts into slush ice to ensure their quality.  He then delivers his salmon to a processor who fillets, vacuum packs, and freezes his and other fishermen’s product, then ships it down to the lower 48.  There, Matt picks the salmon up and starts his second job as a marketer, delivering salmon to 13 locations in five different states.  Sounds complicated, right?

Actually, as Matt rolled into Rockland last Sunday for his salmon drop-off and the first ever Good Tern Seafood Celebration, I couldn’t help but think what a simple and elegant way he had found to get incredibly high-quality salmon into the freezers of people half-way around the world, while creating a personal connection with the fisherman who helped catch it.

How did the Island Institute end up a part of this?  We had heard about Matt’s first trip to Maine in 2015, when he worked with Maine Coast Fishermen’s Association to organize a drop-off in Brunswick. This year, MCFA’s seafood program director Monique Coombs, as well Matt’s friend and Vinalhaven fisherman Mike Mesko recommended that he get in touch with us to help spread word about his newly added drop-off location in Rockland

After talking with Matt and hearing that 10% of all of Pride of Bristol Bay’s profits are donated to salmon habitat preservation, we said we’d love to help out.  Continuing with this generous spirit, Matt offered to donate enough salmon to feed 100 people if we wanted to turn the drop-off into a bigger event benefitting the Island Institute. The Good Tern, a local purveyor of delicious and sustainable food, agreed to host, and the Seafood Celebration was born!

Matt’s salmon on the grill

People driving down Route 1 on Sunday smelled wild salmon from the northern reaches of the Pacific hitting the grill a stone’s throw from the Atlantic.  Those smart enough to follow their noses were greeted by not just salmon, but a seaweed salad generously donated to us by Maine Coast Sea Vegetables.

Matt, after providing expert grill advice to the staff of the Good Tern and the Island Institute, fulfilled local’s orders of 20lb boxes of frozen fillets while providing all kinds of information about the Alaska salmon fishery, including how it’s managed, why it’s sustainable, and how he and other fishermen are fighting to preserve salmon habitat in the face of potentially destructive mining interests.

Thinking back on the day, I was particularly excited by three things:

First, as Matt broke down his pop-up tent, threw it in the back of his refrigerated truck, and was on his way, I was again impressed by the ease of the operation. If a business model this simple had worked for salmon, I wondered if it could be replicated by those in the Maine lobster fishery. Maine has many similarities to the Bristol Bay salmon fishery, including the high volume of product landed and the desire to keep it that way through sustainable fishing and conservation.  Throughout the day, several young fishermen stopped by the Good Tern to talk with Matt, and he now he is on his way to North Haven and Vinalhaven where he will meet with more and continue to share his inspiration and ideas about how to make a living in the off-season.

Second, people loved the seaweed!  While our mission at the Island Institute isn’t as centered around local seafood as much as some of our awesome partner organizations (see localcatch.org or mainefoodstrategy.org), we are always happy to see Mainers enjoying food from our coast, much of it produced by the community members we work with.

Lastly, I’m excited that my own freezer and those of many of my co-workers are now stocked with these hunks of red gold. This stuff is some serious food for thought.

For more information on Pride of Bristol Bay, or to get on their mailing list to learn about ordering salmon for pickup next fall, go to www.prideofbristolbay.com

Psst… Editor’s note here: Try grilling salmon with compound butter, and make this delicious cucumber-seaweed salad on the side. As you can see below, it’s quite the feast. Bonus points for oysters! 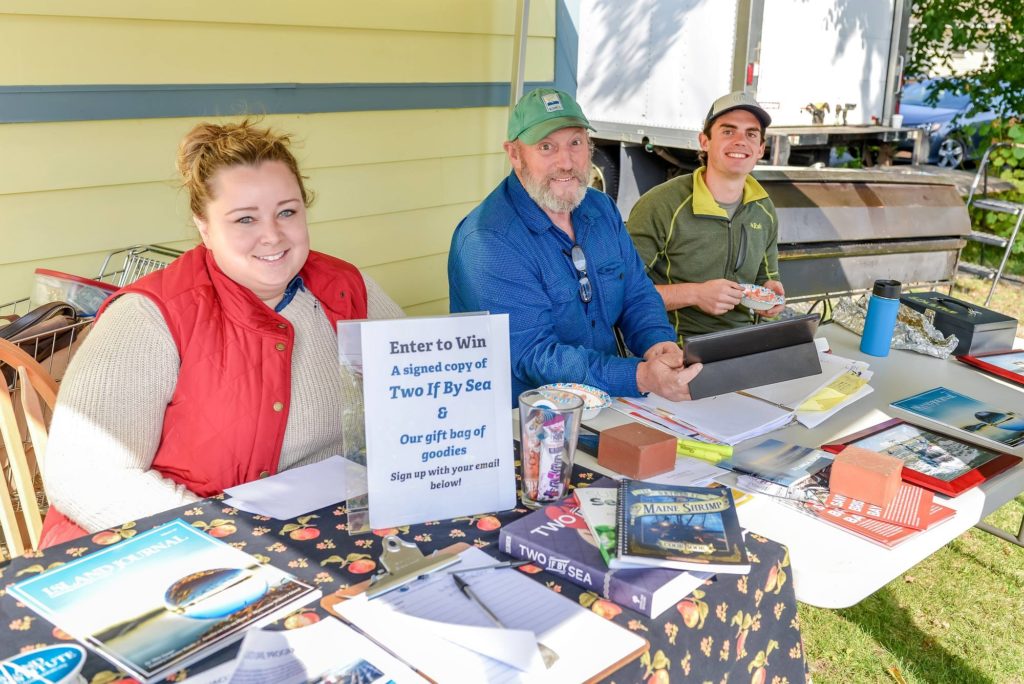