Editor’s Note: At the end of August, Jessi will conclude her Fellowship with the Island Institute. Jessi told this story at an end-of-year celebration for the Island Fellows.

The coolest thing about being a Fellow was indisputably living in the crazy, caring community of the Cranberry Isles. I could talk for hours about the cast of characters of these islands—how I came to know them, what I learned from them—but when I think back on my Fellowship, my favorite moments were undeniably those spent alone in quiet reflection. Despite what people had told me, the pace of life was not slower on island, particularly in the summer months. So in the past two years, the moments that stand out to me were the times I could step back and appreciate the wondrous, albeit somewhat insane, life I was living.

One of these moments has to be the day I spent hunting apples on Great Cranberry last October. I tell you–if there is anything more luxurious than a warm October afternoon on Great Cranberry Island, I have yet to encounter it. Fleecy cumulonimbus clouds drifted languorously across the crystalline blue sky, and the golden light that hit the changing foliage of the trees made the leaves shimmer in reds and oranges and yellows.  A soft breeze with just a hint of winter’s bite meandered in from the ocean, carrying with it that particularly putrid seaweed smell that I had not only come to accept as part of island living, but I had come to crave as the perfume of low tide. On this glorious day I was cruising about in my trusty island car, the ’94 Plymouth that never stops chugging despite what snowbanks I might run into or which part periodically falls out of it. I had with me some old boxes, a notebook, and a camera, and I was about to commence some very serious research. As the Cranberry Isles Agricultural Heritage fellow, I had spent the past year and a quarter pulling together as much information about the islands’ agricultural past as possible. I had spent hours in the archives poring over census records and documents, I had gone through photograph after photograph searching for fence posts or livestock in landscape scenes, I had created an exhibit of my research for the Cranberry House—heck, I had even broken out my audio recorder and got up my courage to ask several islanders for an interview. And now after months and months of careful research I was on a new mission—to track down some of the oldest apple trees on Great Cranberry and capture their essence.

Since the beginning, apple trees had served as the one of the inspirations of my project. Unlike the sheep, the cows, and the hay fields that once dominated the Cranberry landscape but have since disappeared, you can still find apple trees everywhere on Cranberry once you know where to look. Many of the trees are wild seedlings, but apple trees can live to be several hundred years old, so I knew that some of the trees could have been planted by the hands of Cranberry’s early settlers. It was these old, cultivated trees that I was looking for, and I had spent the spring and summer spying on neighbors yards, searching dooryards and treelines for apple blossoms and gnarled branches. I was on the hunt for these old trees for two reasons: 1) to determine which types of apples were cultivated on the Cranberry Isles in the past and 2) to try and figure out where historic orchards may have been planted. My process was to be relatively simple—identify old trees, record their location, collect several apple specimens, taste the specimens, record their flavors, and photograph the tree. Later I would photograph the apples individually from three angles to capture their full shape and size, and then I would take and dry the leftover apples to share with the school kids at one of our Garden Club meetings. I was determined the make this research process as clinical and thorough as possible. I wanted some piece of hard evidence to take back to the islanders to highlight the genetic diversity of their apple trees, which I hoped would serve as a bridge to thinking about the agricultural diversity of these islands in years past.

Unfortunately, I think the clouds got to me, or maybe it was that cloying sea breeze, but I ended up spending much of the day lying in the grass flat on my back, gazing up at the sky and munching on apple after apple after apple. The apples from each tree were stunningly distinct—some mouth-puckeringly bitter, some deeply acidic, some as sweet as candy, and one had a distinct bubble gum flavor.  Their skins ranged from paper-thin covers to thick, chewy hides. The colors, when closely observed in the afternoon sun, were pale greens, sunny yellows, delicate pinks, autumn-leaf russets, heart-rending reds, and deep purples. My day quickly went from being one of a serious, well-planned field trial, to one of sensuous exploration. I recorded my locations, scribbled in my notebook, and photographed the trees, but my observations had become more rhapsodic than scientific. But even though I felt that some of my academic rigor had gone out the window, as I tasted those apples I felt connected to island history in a way I never had before, even after all these months of study. With each taste I felt connected to the islanders of old who had planted and cultivated those trees along with kitchen gardens. I felt connected to the islanders who had told me stories stealing apples off these trees after school. And more than ever I felt deeply connected to this place where generations of islanders have planted seeds and trees, tended to their crops and to their families, and created a community on this little rock in the ocean. 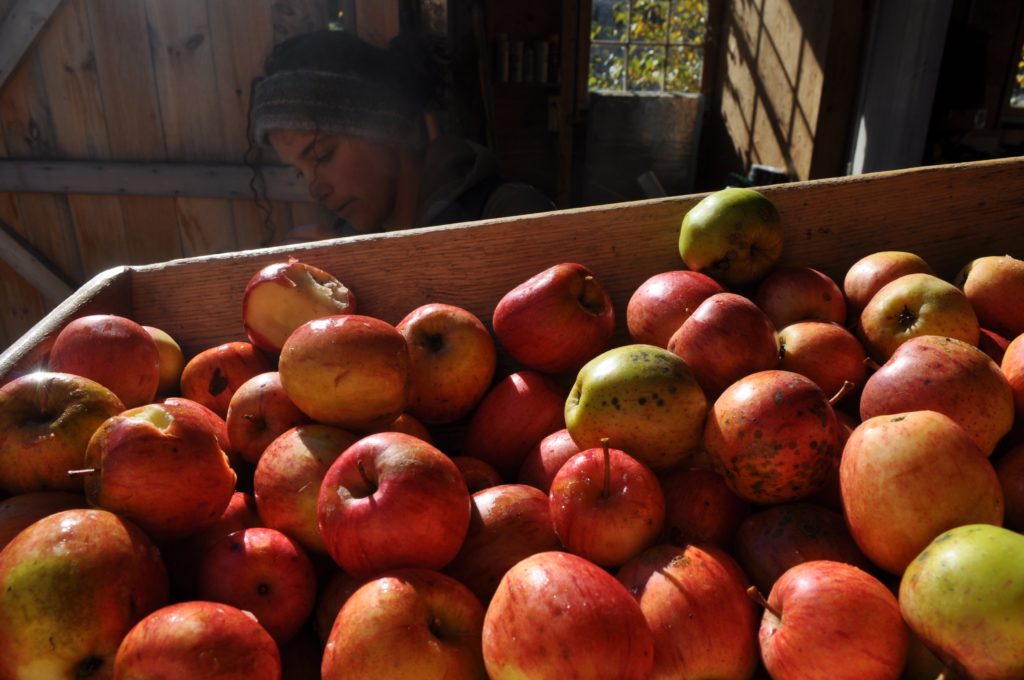