Harry Podolsky, Community Energy Associate at the Island Institute, has been working with Islesboro Central School students for the past few months to help them track and reduce electricity use.

“Climate change is the biggest worldwide issue since the comet came and killed all the dinosaurs.  Projects like the one we’re doing are the future that will save the planet.” Finn Gibson, 9th grade, Islesboro

A student-led group at Islesboro Central School (ICS) is working to implement an inspiring energy project. In partnership with the Islesboro Energy Team (IET) and supported by a grant from the Island Institute’s Community Energy Action Team (CEAT) program, the students have been investigating the school’s electricity use since March 2016. As you can see in Finn’s quote above, they are motivated by concerns over the climate, a desire to find improved solutions for their school, and to reduce waste. The students calculated that the school spends an average of $3,425 each year on lighting alone.

The students began investigating and improving lighting use in math teacher Jon Bolduc’s classroom as a pilot project. First, they estimated the number of hours that the classroom lights are used each year, a trickier proposition than one might think. (Some days have more classes than others! What about holidays? Are the lights on during weekends? How many snow days do we have?) The students realized how use of a ubiquitous resource like lighting can actually change markedly throughout the day, season, and year. And, they learned that the fluorescent lightbulb tubes installed throughout the school were inefficient compared to LEDs.

The students then calculated the annual cost of the lights in Jon’s room. They checked their findings using a SiteSage energy monitoring device, which measures and records energy use in the room and uploads the data onto an online portal, and had previously been used by Islesboro students and teachers through the Island Institute’s Energy4ME program. The SiteSage monitor serves another important purpose – accurately recording reductions in energy use with changing habits or appliances.

With support from the Islesboro Energy Team and a grant from the Island Institute, the students decided to replace the classroom’s fluorescent tube lights with efficient LED lighting. The following graphs show one day of lighting use before and after the LED installation. The LEDs used just a quarter of the electricity. (Fluorescent at left, LED at right. Please note that the scales are different):

Put another way, the LED savings for June 2016 compared to June 2015 are projected at 54% (we don’t have a full month’s data to compare just yet). Projecting this 54% reduction into the coming year, the single classroom will be avoiding approximately 942 kWh of electricity usage. This equates to 727 lbs of CO2 that stay in the ground. That’s more than 350 pounds of coal.

The group shared their findings during the first annual ICS Sustainability Night on May 5, which featured projects from every class and student. (As a side note, the school’s efforts to promote and protect a clean future have received widespread attention. They earned a Source Award presented by the Portland Press Herald for teacher Ryan Martin’s work supporting students to grow food for the school’s cafeteria, and the development of new sustainability curricula. The lighting group added a pivotal component to the sustainability picture at ICS with their energy efficiency investigation – further reinforcing a culture of self-examination and reverence for the finite natural resources of the island.)

Emily Lau, a 9th grade student involved in the project, explained why she and her classmates have taken this so far. “It’s so inspiring to see and learn about how we can save energy—and save the planet. Not only is it fun to learn about the science behind energy-efficient projects, but it’s one step towards preserving the Earth.”

More than a classroom experiment?

On Tuesday, June 14, the students presented their findings to the Islesboro school board.  They argued for upgrading the entire school to LED lighting – a move that would save the school $1,820 annually, or 53% of its lighting electricity costs. While the school board did not vote on the proposition that night, it seems likely that these tangible, student-driven numbers will spark further conversation, and conservation, in the school. “It’s exciting to see what students can do when given the opportunity, and makes me feel great about the future,” said Paula Mirk, Islesboro Energy Team Coordinator. “Those involved in this project seem eager now to make more projects happen at the school, and our Energy Team is committed to working with them and supporting their efforts.”

This project was made possible by a grant from the Environmental Protection Agency, administered through the Island Institute Community Energy Action Team program. For more information on this program, please contact Harry Podolsky at hpodolsky@islandinstitute.org. 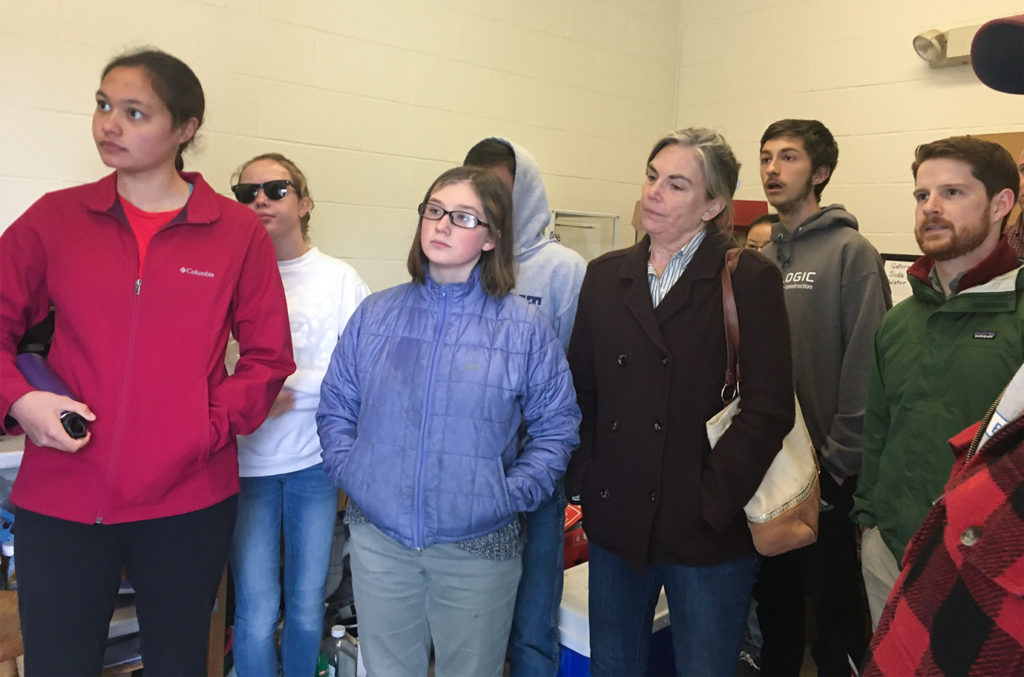 The Islesboro Energy Team visited Camden Hills Regional High School this spring to learn about energy initiatives in other schools.