The lobster: one of the most iconic creatures in Maine. Mainers and tourists alike enjoy this tasty crustacean, but many are unaware of the changing conditions and pressures that face lobstermen out on the water every day. With new ocean development, increased shipping and recreational traffic, and changing ecosystems, there are many things lobstermen have to consider nowadays.

The Marine team at the Island Institute recently completed a characterization study of the lobster industry in Maine, and conducted interviews in each of the seven lobster management zones from southern Maine to Downeast Maine. We documented lobstermen’s observations about how the fishery is changing, and their concerns for what would happen in the future if lobstering isn’t considered in the ocean planning process.

“Fifteen years ago if I thought I’d be doing what I’m doing now and fishing where I’m fishing I would think, no way…. Right now if you’re going to be a fisherman you got to be ready to change and don’t sit back and say, no, I’m not going to.”

Before going further, let’s take a look at the Maine lobster fishery. In 2014, the American lobster was the single most valuable species landed in the U.S. and currently has a dockside value of $566.6 million. In Maine, there are over 6,000 lobster license holders, and the industry is particularly important in the rural coastal and island regions.

The Maine lobster fishery is open year-round and there is not a set lobster fishing season (with the exception of Monhegan Island). The peak landings of lobster come between July and November, 80% of which are “shedders” with soft shells and sweeter tasting meat, and 20% are larger hard-shell lobsters. The management area is broken down into 7 Lobster Management Zones (see above). Within each Zone, trap limits, v-notch protection, minimum size and other management measures can vary to best suit the localized fishery conditions.

Above: Dave Thomas, fisherman on Islesford, talking with Chris Petersen, faculty member at College of the Atlantic, about the Little Cranberry Lobster Coop. A class from COA visited the island with us to understand the value that fishing brings to a community, both economically and culturally. Check out the student blog post for a behind-the-scenes look at the trip.

Lobsters on the move: What we learned from Maine’s lobstermen

Landings in the lobster fishery have increased significantly in the past several decades in the Gulf of Maine and Georges Bank stock areas. In 2011, the industry broke the 100-million-pound mark for the first time, and statewide landings averaged over 121 million pounds for the last five years. This is due mostly to the favorable ecological and environmental conditions which increase the size and number of lobsters available. But it’s not the same everywhere—Southern Maine has seen a decrease in their percentage of total state landings while Downeast Maine has seen the most dramatic increase. (In Southern New England, meanwhile, lobster landings continue to decline).

There has also been increased fishing in federal waters (more than 3 miles offshore). Fishermen have larger boats and are going out for longer trips offshore, sometimes for several days at a time. Because of this shift in fishing practices, there is a potential for interacting with large scale, non-fishing-related ocean uses. Offshore wind, aquaculture, and sand and gravel mining projects have the potential to impact, and be impacted by, the expanding offshore lobster fishery.

Finally, lobstermen have observed that lobsters are now being caught on bottom habitat that has not been historically productive. As one lobsterman we spoke with explained, “Back in the early ‘90s, there was a lot of bottom that we didn’t bother to fish. Mud bottom was too soft and there just wasn’t anything on it. Now some of that bottom is some of our best producing bottom.”

So, how are fishermen coping with these changes and what is the interaction between the lobster fishery and different ocean uses? Enter the Northeast Regional Ocean Plan.

Ocean planning is an important and powerful tool for bringing different ocean users together and figuring out how they can best share the water and bottom in the future. The Northeast Regional Ocean Plan, released last month in draft form, is the first regional plan in the nation. (Nick Battista, Island Institute marine programs director, wrote about the plan here.) It’s a big step in the right direction, but currently doesn’t include much about the lobster fishery. This lobster characterization study will be helpful in getting lobster, with all of its variability, into the draft Ocean Plan in the next couple of months.

Based on our conversations with lobstermen, here are the biggest concerns:

So what can we do about it? The Northeast Regional Ocean Plan is open for public comment until the end of July, and we at Island Institute will explain why it’s so important to include Maine lobstermen’s considerations. Here are a few recommendations for how to include the lobster fishery in future projects:

This information will help fill an identified data gap in the Regional Ocean Planning process and help give Maine fishing communities a stronger voice in the decision making process for changing ocean uses and the environment. The more voices we can include, the more comprehensive, and successful, the Northeast Regional Plan will be. 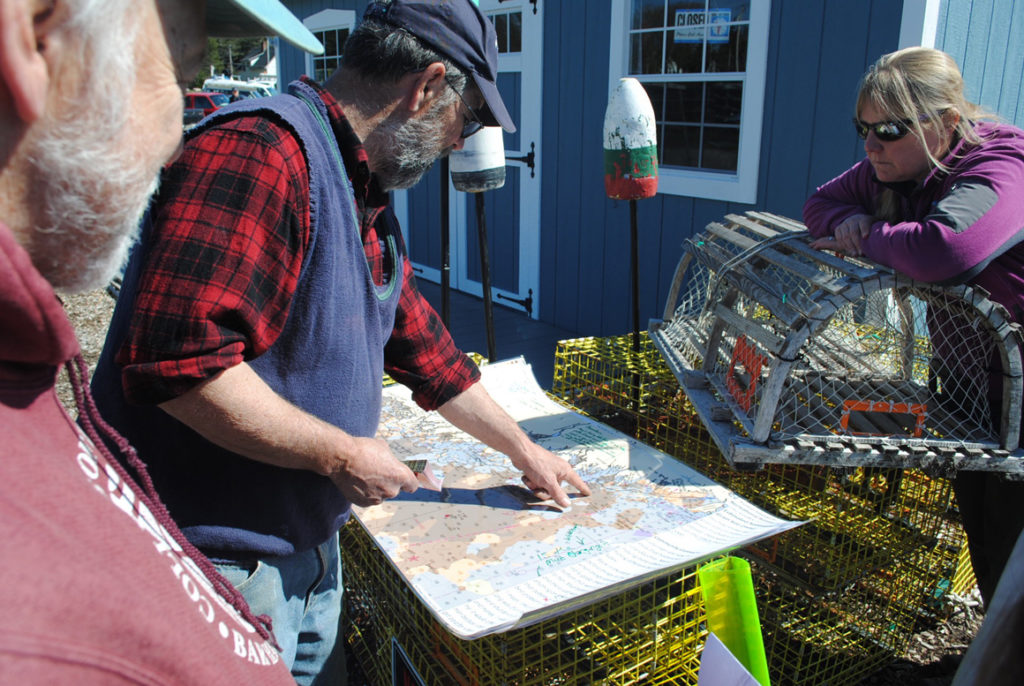 Dave Thomas looks at a map we created with data from the Northeast Ocean Data Portal. He explained that lobster are now found on bottom types that used to be unproductive.