Kate Tagai is the Island Institute’s community development associate. She spent two years in Vanuatu in the Peace Corps, and returned to visit this winter.

I casually tell people I’m going to spend time with my in-laws, as if it isn’t a big deal, as if I do it all the time. Unlike most people, it takes three days to get to my in-laws.

The first day of travel is spent crossing the United States and part of the Pacific Ocean. We lose the second day in a whoosh over the international dateline just before Fiji and land in Vanuatu, a nation of many small islands, where my husband Mansosoi grew up. On the third day we climb on smaller and smaller planes, jumping between progressively smaller islands, until we reach Mota Lava, a 3-mile-long speck in the middle of the vast Pacific Ocean. Home.

Mota Lava is shown by the yellow star

Technology is in its infancy around Vanuatu, and though cell phones were introduced about 5 years ago as an antidote to a costly landline system, my cell doesn’t work. Luckily, I was planning to be off the grid: no internet, no pinging email inbox, no cell phone, no electricity, no work for three whole weeks. I couldn’t wait.

I wasn’t there for more than two days when I realized that I had picked up conversations with islanders on Mota Lava in almost the same places I had left them with islanders in Maine.  I hadn’t left work behind, I’d just added palm trees.

“The village can’t agree on which project should get priority, so none of them get done.”

“We need more volunteers, but everyone is already volunteering for so much already.”

“Our youth are moving off island for better job opportunities.”

“Our clinic doesn’t have access to the supplies it needs, and when the nurse goes on vacation, there is no one else to take his place.”

“We can start a business, but we don’t have access to markets to sell our product and my brother stole half the profits the last time we used him as our go between.”

And from me: “You want me to give a workshop on meeting facilitation for the Chiefs?”

Our conversations keep circling back to familiar themes, even if they are in an unfamiliar language. I start thinking about all the ways that islands are islands no matter where in the world they are. In fact, if you look at the broader themes, there are more similarities between Mota Lava and Maine islands than there are differences.  Just as in Maine, each island has a very distinct personality, but they share many of the same challenges, such as:

Sitting in the community kitchen, watching a group of women roasting breadfruit over the fire, they ask me questions about my life in Maine, our house, our car, the weather, and all the things that are hard to translate because they are so different.  But at the heart of it, I realize, those are all superficial things.  The things that matter are identical (family, community) as are many of the essential struggles.

This afternoon, kids will start to wander in when they get hungry, and husbands will follow, carrying other dishes prepared over the home fire.  A soccer game will probably break out in the open space in front of the kitchen, while the women set out plates and start dishing out food.  Everyone will get a plate piled high, even if they didn’t bring their own plate or contribute to the meal.  They will be fed because they are there and no one goes hungry at a community dinner.

Sitting on a mat under a thatched roof in an open air kitchen in the South Pacific, watching the chaos of mealtime, I’m reminded of the last potluck I attended on Isle au Haut. Everyone had a plate piled high with food, no one asked who brought what, because it didn’t matter unless you wanted the recipe. It turns out, when it is islands, 8,600 miles isn’t so far after all.

Mansosoi at the highest point on the island 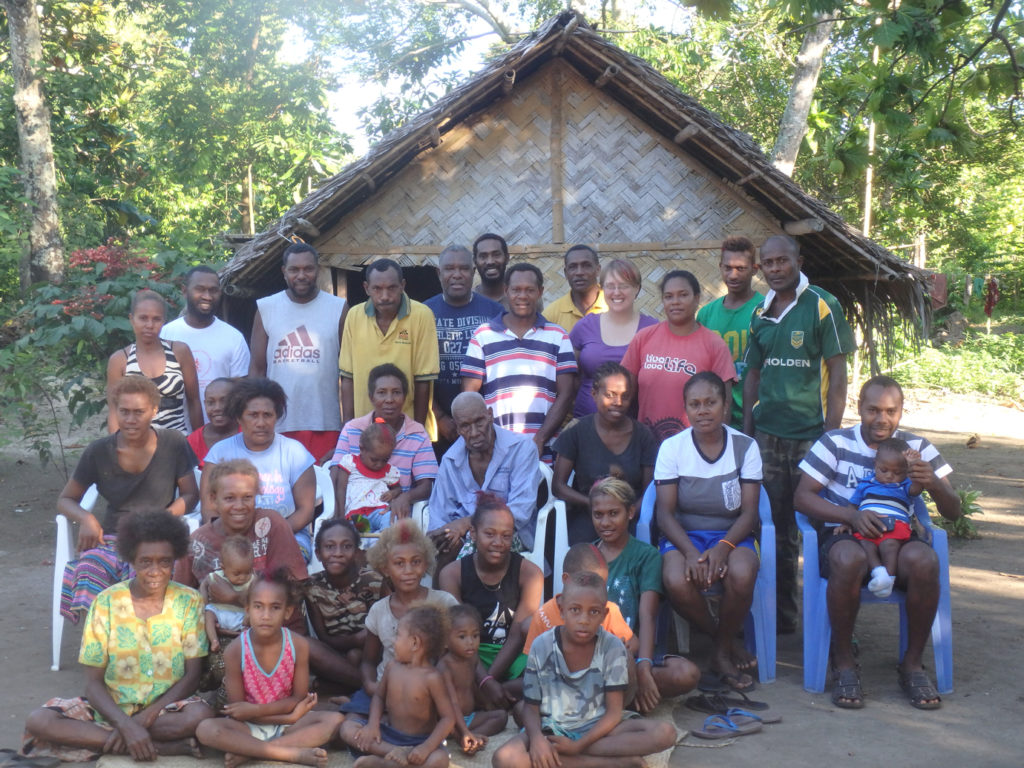