Monhegan Island, Isle au Haut, and Matinicus Island face critical junctures in their energy future. Monhegan and Matinicus have the highest electricity rates in New England, and Isle au Haut is reliant on a 33-year-old, two-inch-thick cable as its sole connection to the mainland for power. At the end of March, representatives from power companies on all three islands visited Nantucket and Martha’s Vineyard, MA to share experiences and strategies from their work creating sustainable energy systems as part of the Island Institute’s third annual Southern New England Exchange Trip. Throughout the trip, we were constantly surprised by the major differences and similarities we saw between the Massachusetts and Maine communities. Despite disparate situations, energy leaders from each island found common ground by sharing their experiences in using sound community outreach, long-term planning, and innovation to move goals forward.

Coming from Maine, the scale of Nantucket and Martha’s Vineyard was eye-opening. There are around 15,000 year-round residents on Nantucket alone — five times Maine’s combined year-round island population — and that number continues to grow. A larger population, more land, and higher real estate costs and tax revenue create energy issues of a different kind than we see on Maine islands. With huge demand for electricity, power providers on the Vineyard and Nantucket face larger problems when things go wrong. Staff at the Nantucket Community School said that during Winter Storm Juno, the gym provided emergency housing for 150 linemen who were sent out to restore power to the island and became stranded. Bill Stevens of Isle au Haut summed it up well, saying “any disruption for them is massive! A storm, an outage – the logistics are crazy.”

For island communities, only so much power demand can be met before more capacity is needed. This could mean an extra cable (Nantucket has two), more generators, or renewable energy. Solutions can cost a lot of money, but investing in electrical efficiency provides a cheaper stopgap that lowers the demand for power, or at least slows its increase. Nantucket has targeted inefficiency, partnering with a state program to provide incentives unique to the island that include free LED light bulbs! It was great to see that techniques that have served Maine islands well, such as buying appliances and LEDs in bulk, are hard at work on Nantucket and the Vineyard, lowering costs and increasing access to efficiency upgrades.

Martha’s Vineyard and Nantucket have a superb wind resource, and, like Monhegan, are located near proposed offshore wind power sites. Nantucket’s K-12 school campus boasts a Northwind 100 kW wind turbine (the same model is installed at Camden Hills Regional High School) which takes advantage of the steady wind and creates significant savings for the town.  Martha’s Vineyard also has some wind power, although the island has a zoning ordinance: above 150′, the MVC reviews a proposed turbine as a development of regional impact, where shorter turbines are left solely for the review by the towns.

Aligning energy projects with the best interests of the community requires a measured and thoughtful vision. As Monhegan, Matinicus, and Isle au Haut face major decisions for the future of their energy systems, they have a golden opportunity to integrate the energy systems they choose into a longer-term planning effort. Islanders are experts at considering the long view out of necessity–decisions made today will directly affect conditions on the island for future generations–so learning from island planners on Martha’s Vineyard was a priority for them. We met with staff from the Martha’s Vineyard Commission, a county-level planning board that created an energy roadmap for the island as part of their 2009 Island Plan. It helped spur the creation of Vineyard Power, a cooperative with more than 1,300 household members that has driven local efforts to reduce reliance on fossil fuels and increase locally-owned renewable energy generation.

The work that the Martha’s Vineyard Commission and Vineyard Power are undertaking closely mirrors an ongoing energy planning effort on Monhegan.  Marian Chioffi, who runs a small hotel on Monhegan and is the bookkeeper for the Monhegan Plantation Power District (MPPD), was first inspired to create an energy plan on Monhegan after a community meeting about the Maine Aqua Ventus (MAV) floating offshore wind project that had been proposed 2.5 miles south of the island.

“I realized that we couldn’t depend on [Maine Aqua Ventus] to solve our energy issues,” she explained. “We have to take charge of our own energy future.” Marian organized the Monhegan Energy Planning Committee, which is tasked with identifying options for Monhegan’s energy future, gathering input from stakeholders, and outlining a way forward for the island. Vineyard Power staff shared their perspectives on Monhegan’s negotiations with MAV and the approaches they have used in negotiations with Offshore MW, the wind developer seeking to build on the leased area off of Martha’s Vineyard. Starting a conversation that includes everyone can be a daunting task, but energy leaders on Martha’s Vineyard and Monhegan both began at the most logical point–working to ensure that any proposed development would balance impact with benefit, a concept that was highlighted in a report recently released by the Island Institute.

Differences of scale and oversight create unique challenges in each community.  The Vineyard and Nantucket have full-time staff dedicated to planning, energy efficiency initiatives, and renewable energy project development, but they find themselves yearning for more autonomy and independence to pursue solutions. On the other hand, the three energy leaders representing Maine islands on this trip are a full-time lobsterman, hotel owner/manager, and a design/build contractor in addition to spearheading energy efforts. Their challenges are huge and their time little, but they do have the autonomy to make changes to their systems. They have the ability to engage the entire community and attempt to make decisions collectively.  When these island energy leaders sat down to meet, it was clear that the difference in scale made little difference. Whether their island is large or small, each leader makes use of sound community outreach, innovation, and planning to make decisions, so they all share common ground.

The Southern New England Exchange trips are supported by the U.S. Department of Energy’sWINDExchange program and the Islanded Grid Resource Center. 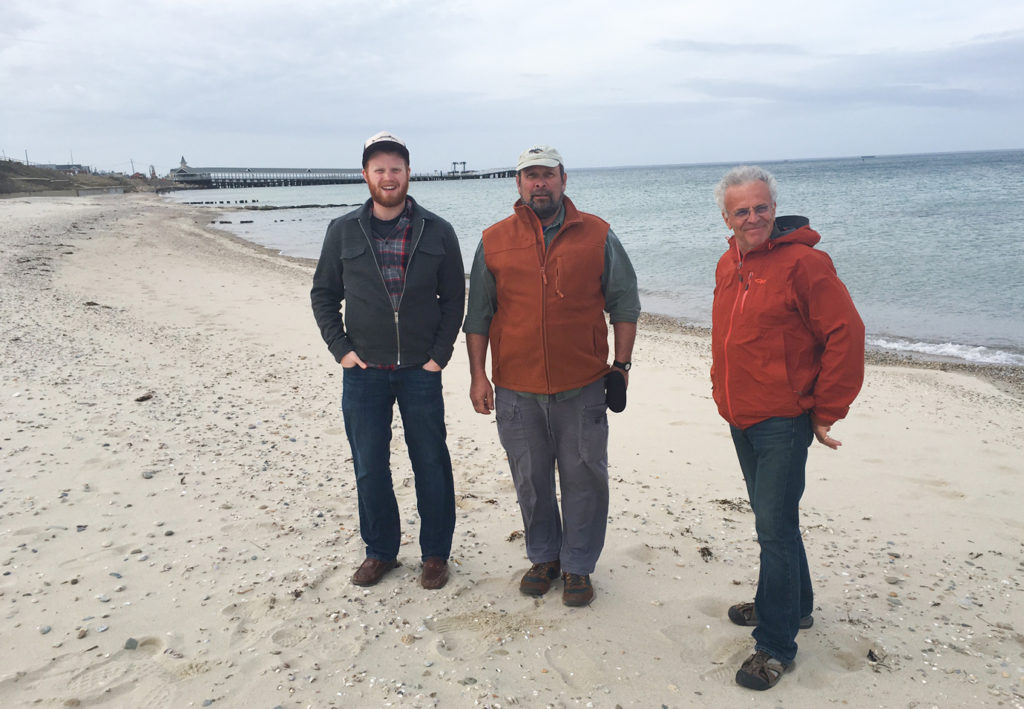 On the beach on Martha's Vineyard. From L-R: Ben Algeo