On Saturday, December 12, representatives from 195 nations signed the Paris Accord, an international treaty to combat climate change. The historic agreement commits each country to reduce its greenhouse gas emissions in an effort to prevent global temperatures from rising more than 2 degrees Celsius and avoid the worst effects of global warming. Those of us active in the worlds of clean energy and environmental action have been waiting a long time for this to happen. It’s a great moment to celebrate this exciting step forward. At the same time, the language of the agreement is fairly vague about how we are going to achieve the emissions reductions that the nations of the world have affirmed. Many everyday people are wondering what they can do to help meet the ambitious goals outlined in the accord.

As the New York Times reported, island nations played an important role in the negotiations, advocating for aggressive action to limit the effects of climate change including rising seas that now threaten to inundate their homes. Island communities were also featured during the conference as examples of places that are finding ways to lower their carbon emissions by transitioning to renewable energy and high-efficiency buildings and transportation. Denmark’s Samso Island, featured recently in the Huffington Post and earlier this year in the Island Journal, now generates more local renewable energy than it uses.  The island of about 3,800 people has become an international model for the power of local communities seeking to reduce their impacts on the climate.

But we can also look closer to home for ideas about how to solve the Earth’s most urgent environmental challenge. In fact, the islands of Maine are developing their own local approaches to energy efficiency and renewable energy. Some of these approaches are featured in the video that we released earlier this year, “Saving Like an Islander“.

On Vinalhaven, for example, the local energy club has helped weatherize more than fifty island homes during its eight Weatherization Weeks, using a community-wide approach to access discounted energy efficiency services. Upgrades islanders have made to their once-drafty homes are now saving more than $18,000 per year, and that’s just on Vinalhaven. Twelve other islands up and down the coast from Cliff Island to Little Cranberry have followed their lead, weatherizing a total of 339 homes over the past four years, saving a total of $132,000 every year in heating fuel.

Folks on Peaks Island have taken a similar approach, installing air-source heat pumps, the “miracle” heating technology that is taking the state of Maine by storm. Using their collective purchasing power to negotiate discounted group rates, residents on Peaks are saving up to 15% off the price of installation. After two rounds of group purchasing, Peaks Islanders have installed more than 60 heat pumps and are now paying as much as 50% less to heat their homes.

Similarly, on Monhegan and Matinicus, the two most remote islands with the highest electricity rates in the state (how does 70 cents per kilowatt-hour sound?!), Island Fellow Ben Algeo has helped coordinate bulk purchases of LED bulbs. After conducting inventories of island buildings, he discovered that 40% of the lights on Matinicus were inefficient, old fashioned incandescents [https://www.islandinstitute.org/working-waterfront/how-many-lightbulbs-does-it-take]. With a simple sign-up form and a whole lot of leg work, Ben made it easy for people to say “yes” to the new bulbs and easy to get rid of their old mercury-filled CFLs (hazardous waste management is no easy task on an island). Now, with 3,200 LEDs purchased across the two islands, Monhegan and Matinicus islanders will be saving about $20,000 on their electric bills each year.

What started with one week of weatherization on Vinalhaven has quickly grown into a movement across the islands to make buildings and homes more energy efficient and to lower energy costs and limit climate impacts for everyone.

To learn more about these projects check out Saving Like an Islander and visit our website, www.islandinstitute.org/program/energy. 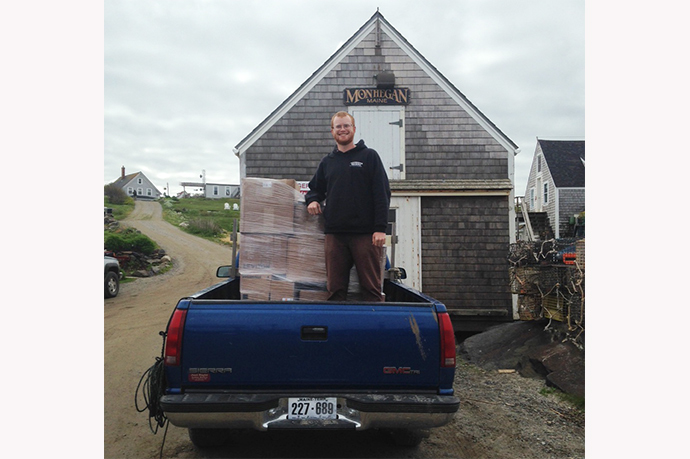 Ben Algeo with over 2