Portland-based Tilson Technology, which produced the report for the Island Institute, estimates that full access to broadband speeds on Maine islands would increase GDP in those towns by $90 million over ten years and cause the creation of 170 jobs on the coast by 2028.

Lisa Leahy, Associate Executive Director of ConnectME Authority, said the report showed that broadband, like other forms of infrastructure, is critical to economic growth.

“Broadband is every bit as important for Maine as roads and piers and airports,” Leahy said. “It provides our island communities and remote coastal locations with the opportunity to overcome longstanding problems of isolation and distance from markets, education, government and healthcare; challenges that have faced these areas for centuries but are more acutely present in today’s technologically advanced world.”

Maine First District Congresswoman Chellie Pingree, who lives on the island of North Haven, which was included in the Institute report, said the economic future of island communities depends on high-speed internet access.

“High speed internet isn’t a luxury, it’s really become an economic necessity,” Pingree said. “Having a fast, reliable connection to the internet is necessary for small businesses and for schools to stay connected—especially for small, remote communities. And as this report shows, too often island communities are left out when high speed networks are developed and expanded. Getting broadband to islands is pretty important if those communities are going to remain viable.”

“Access to high-speed broadband is an essential part of ensuring that entrepreneurs, students, and families in Maine have the technological tools necessary to participate in today’s global economy,” Senator King said. “Broadband access is particularly critical for residents of remote island communities, as it provides a virtual bridge to a world of online business and educational opportunities.”

“In today’s digital age, fast and reliable Internet service has become a basic necessity for job creators and residential customers,” Congressman Poliquin said. “I look forward to closely reviewing this report and learning more about the opportunities to improve economic opportunities and the quality of life for our Second District island communities.”

Beverly Johnson of Chebeague Island and Page Clason of Islesboro explained that high-speed internet access is becoming a critical factor in attracting and retaining young families to island communities.

“The sustainability of island communities these days depends on fast internet,” Johnson said. “It’s getting so that a town with insufficient broadband might as well have insufficient electricity or water. People don’t want to live in such a place.”

“Our rural and island communities must prepare for change,” Clason said. “We’ll use this report to help preserve our year round island community as we know it and position ourselves for new opportunities yet to arrive.”

The ConnectME Authority defines a community as “underserved” if its internet speeds fall below 10 megabits per second (Mbps) for both upload and download.

Speakers at this morning’s event included 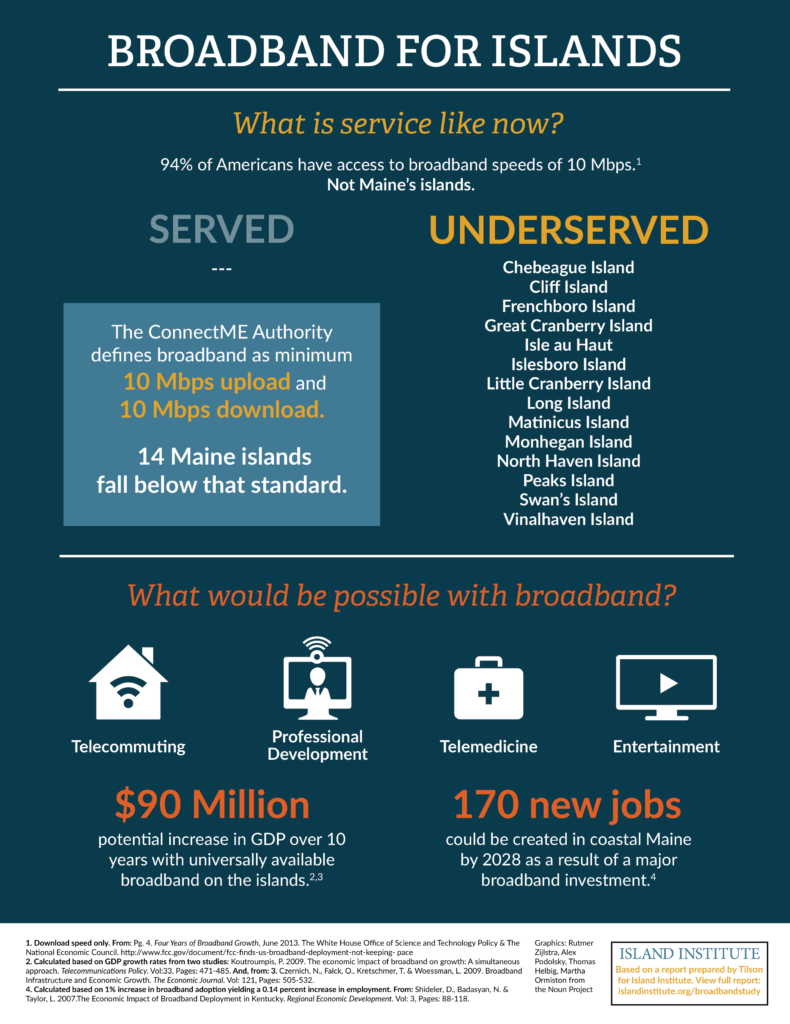