“I decided, after reading about the 15 Maine Islands, that we’re most similar to Matinicus,” said AlexAnna Salmon, Village Council President of Igiugig, Alaska and speaker at the Island Energy Conference. “We are not an island, but we are like an island in that you can only get there by air charter.”

Igiugig, Alaska, population 70, isn’t a place you’d expect to have so much in common with remote coastal Maine. But the similarities line up, especially when it comes to energy: diesel for generators delivered via long boat or plane ride; a town reliant on a microgrid and a tiny power company; some of the highest electricity prices in the nation at $0.60–0.80 cents/kWh (the U.S. average is $0.13).

In recent years, Salmon has led the village in taking big steps to reduce their diesel consumption. “We decided that we’re rural, we’re independent, we can attack this on all fronts,” she said. They began weatherizing old homes, fixed up public buildings, started greenhouses, and put in wood boilers, horizontal-axis wind turbines, and some solar thermal systems. But the biggest move was opening their clean, fast, and salmon-rich river to hydrokinetic testing. In 2014 and 2015, Portland, Maine-based Ocean Renewable Power Company deployed a massive “RivGen” unit near the village, hooked directly into their grid.

The device isn’t yet commercialized, so Iguigig needed extra funding to get it running. “With our limited money, we needed partners, and that’s where ORPC came in,” AlexAnna explained. They applied for project financing and selected the Kvichak River as a test site.

“This was providing about half of our power. If this device were commercialized, it would displace 18,000 gallons of diesel and save us $133,000/year.”

The project, it turns out, was a success. “Over 2 MWh was delivered to onshore stations, and over two seasons there was no impact to fish,” Salmon said. “In a three day period, 1.2 million salmon swam by the device. This was providing about half of our power. If this device were commercialized, it would displace 18,000 gallons of diesel and save us $133,000/year.”

Salmon explained that while the hydropower device may not be a long-term solution, it has been helpful for their village all the same. “The public has now developed a mentality of ‘there’s no harm in trying and if we will get some economic benefits, either short term or long term, then why not?’”

New England islands are starting their own projects to reduce fossil fuel consumption. On the day following Salmon’s address, Island Energy Conference participants travelled to Star Island, NH, where a solar array now generates about 50% of the island’s power. On Monhegan Island, ME, energy efficiency has played an important role in lowering household energy costs.  An LED group purchase in the Spring of 2015 is expected to save ratepayers on the island about $15,000 annually.  Additionally, the Monhegan power company is replacing its old, inefficient diesel generators with  fuel-efficient microturbines, and will install some solar generation to reduce the load.

Residents of Matinicus, Igiugig’s unofficial sister island, are up against several challenges. The high cost of generating electricity with diesel generators is spread over a small—and shrinking—base of customers.  Additionally, the generators themselves are losing efficiency with age, and line losses (electricity consumed by the grid before it reaches buildings on the island) add additional costs that must be covered. These issues hit home for a lot of folks on the island this summer, when the power company was forced to raise its base rate (the price of power, minus most fuel costs) by 15%.

Like Monhegan, Matinicus is also using energy efficiency to address rising energy costs.  An LED group purchase there is expected to provide about $5,000 in annual savings, and another round is planned.   While these savings help, a longer-term strategy is needed.  With the falling cost of photovoltaic (“PV”) panels, solar seems like an enticing option, and a community-scale project would allow the whole island to benefit. The island’s first assessor, Clayton Philbrook, is leading the charge, but it’s not a straightforward process on an island 22 miles out to sea with a population of fewer than 100 people. Commercial prospects are limited for such a tiny market, and after a few grants didn’t come through, islanders have expanded their search to include private financing and other approaches.

Could Matinicus be the site for a project like Igiugig’s? While there are no specific proposals in the works, Matinicus does have some interesting prospects. In 2015, the Governor’s Energy Office released the Maine Hydropower Study, which had a section devoted to wave energy. In that section, Matinicus was identified as a “prioritized wave site.” The report points out that a wave power test project off Matinicus would take advantage of a strong resource, and could help “address [a] community with [a] high cost of power.”

“It’s been grueling, exhausting, it feels like we have come so far,” said AlexAnna. “But we have only just begun.”

No matter how Matinicus decides to tackle its energy issues, the path to energy efficiency and manageable costs is a long one. Just like in Igiugig, it requires strong leadership and a focus on community ownership. “It’s been grueling, exhausting, it feels like we have come so far,” said AlexAnna. “But we have only just begun. We have a more confident population that is willing to set a goal and make it happen. As a leader, it’s been important to inform the public about what’s going on, and to manage the expectations of the community.

“Igiugig doesn’t have a loud voice in government. Demonstrating new technology successfully, we now stand in a position to help inform our leaders about what works and what doesn’t, and what is culturally and environmentally appropriate.”

Igiugig and AlexAnna Salmon may not have known the outcome of the RivGen trial, or have even imagined it was possible a few years ago. But the community is willing to try new approaches to tackling their energy challenges, and they are moving, step by step, in the right direction.

Want to read more about energy work on Monhegan and Matinicus? Check out Ben’s blog: dieselislandpost.wordpress.com 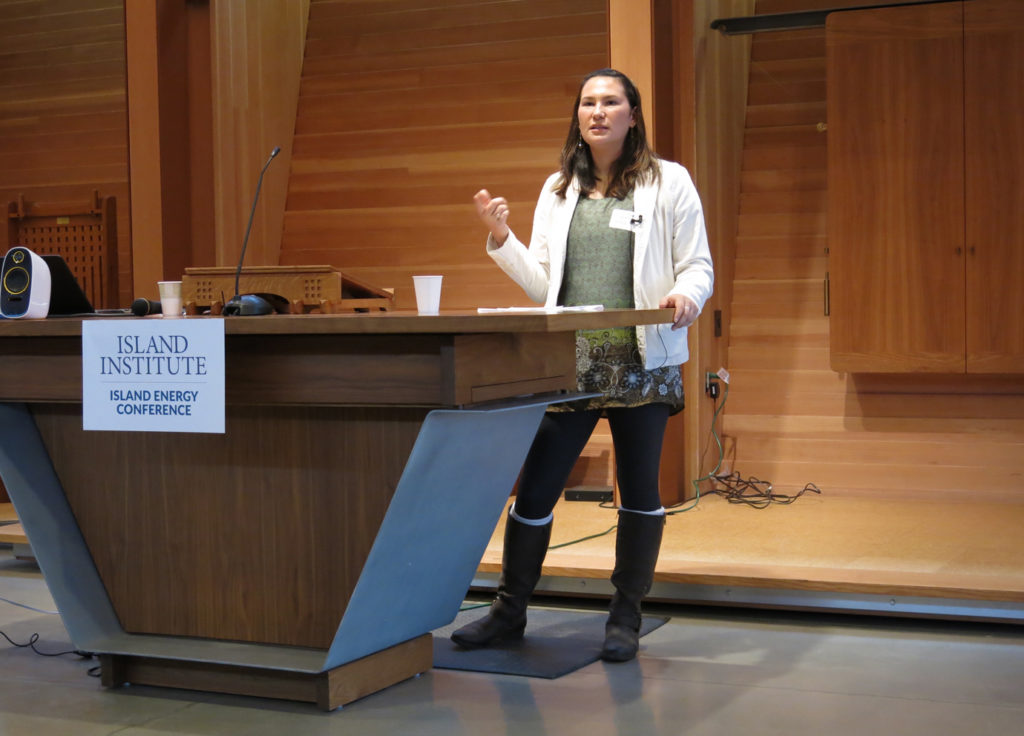 AlexAnna Salmon speaks at the Island Energy Conference on November 6