MONHEGAN, ME—Monhegan Brewing Company and the Island Institute today announced the release of a new island-themed beer. The “summer blonde” brew is named 15, after the fifteen year-round island communities on the Maine coast. A portion of proceeds from beer sales will benefit the Island Institute’s work on those islands.

The Institute will host two launch events to celebrate the partnership: at Fog Bar & Cafe in Rockland on Tuesday, August 11th at 6:30 p.m.; and on Wednesday, August 12th at SPACE Gallery in Portland at 6:30 p.m. The launch events will features screenings of the Island Institute’s video series A Climate of Change, examining the effects of climate change on fisheries in Maine and beyond.

15 will also be available at Monhegan Brewing Company’s taproom on Monhegan beginning July 31.

“Our goal since day one has been to encourage visitors to the island and sell beer locally, rather than shipping it off,” says Mary Weber. “99% of our beer is sold out of our taproom.”

Monhegan Brewing Co. is owned and operated by Monhegan Island residents Matt and Mary Weber, a lobsterman and former island schoolteacher. They teamed up with Mary’s father, Danny McGovern, to start making beer in 2013 with support from the Island Institute’s Island and Coastal Innovation Fund for island entrepreneurs.

“Matt and Mary have started a really innovative business on Monhegan and have highlighted non-traditional economic opportunities on Maine’s islands,” says Bri Warner, economic development director at the Island Institute. “I am so excited that this partnership will highlight their business and help illustrate the creative economy that is brought to life every day by the amazing entrepreneurs that we work with.”

Artwork for the beer label was provided by Monhegan artist Donna Cundy.

Monhegan Brewing Company’s taproom on Monhegan Island is open daily from 11 a.m. to 6 p.m., and is accessible via the Monhegan Boat Line from Port Clyde or Hardy Boat Cruises from New Harbor.

About the Island Institute: 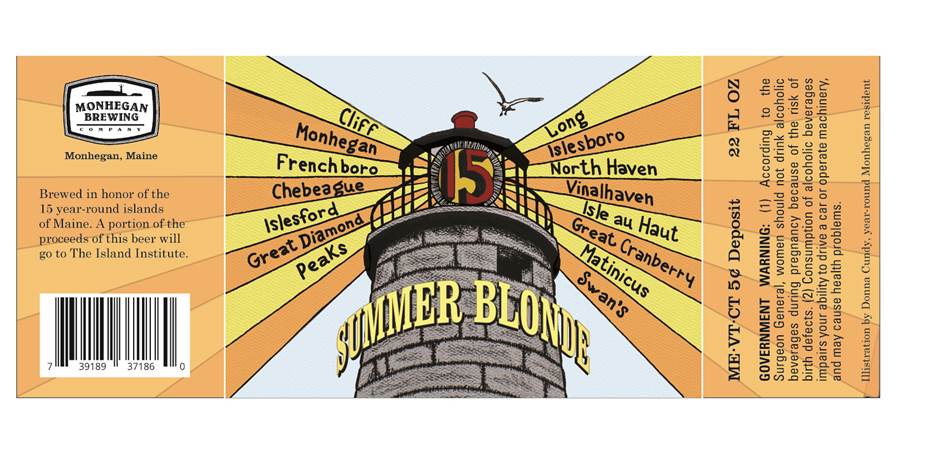 The label for Monhegan Brewing Co.'s "15"